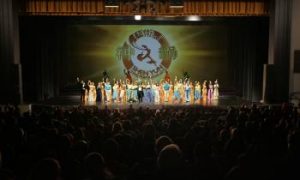 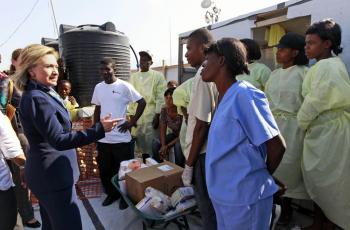 Hillary Clinton talks with workers as she visits Partners in Health Cholera Treatment Center in Port-au-Prince on January 30, 2011. (Alex Brandon/AFP/Getty Images)
US

By Helena Zhu
Print
Secretary of State Hillary Clinton visited Port-au-Prince to meet with outgoing Haitian President Rene Preval and other leaders on Sunday, Jan. 30, to discuss the disputed presidential election and find the “best compromise.”

Clinton pressed the leaders to adopt recommendations by Organization of American States (OAS) experts, an internationally-backed solution to the election disputes.

The OAS recommendations would revise the election disputes, and place singer Michel Marelly on the ballot.

In the November balloting, OAS believed that former first lady Mirlande Manigat and Martelly were the only ones who deserved to be on the ballot instead of Jude Celestin, a candidate hand-picked by Preval.

The election results ignited protests that left five dead months ago. Even though the ruling party said Celestin would drop out of the presidential race, he did not do so, according to The Washington Post.

During her visit, Clinton met with all three candidates.

"We have made it very clear we support the OAS recommendations, and we would like to see those acted on. And I am going to do my own assessment about the way forward," Clinton, who met with all three of the candidates, said, according to a transcript issued by the US State Department.

Officials are afraid that the extended dispute over the elections will discourage the flow of aid and investments into the country following the massive and destructive earthquake that killed more than 200,000 people last January.

In addition to meeting with Preval and the three candidates, Clinton also visited a cholera treatment clinic. Since last fall, 3,500 Haitians died due to the disease.

Clinton noted that there have been a significant number of newly-reported cholera cases and said “we have a long way to go.”

Preval, whose term is supposed to end Feb. 7, extended his term for three months after the passage of an emergency bill, which prompted the violent protests.