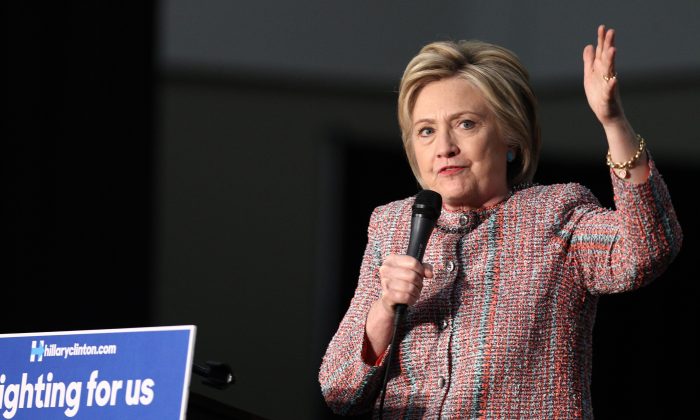 Hillary Clinton Doubles Down After Inspector General’s Audit: ‘Nothing Has Changed’

A 78-page report released by the Inspector General found presidential candidate Hillary Clinton guilty of breaking federal rules with her private email server, but Clinton and her campaign adamantly deny that they did anything wrong.

“Well, there may be reports that come out, but nothing has changed,” Clinton said in an interview with Univision’s Los Angeles. “It’s the same story.”

“Many people [used private email]. It was not at all unprecedented. I have turned over all of my emails. No one else can say that,” Clinton continued. “I have been incredibly open about doing that. I will continue to be open, and it’s not an issue that is going to affect either the campaign or my presidency.”

Her campaign also released a 203 word statement reiterating her defense, claiming no wrongdoing in her email use:

“The inspector general documents just how consistent her email practices were with those of other secretaries and senior officials at the State Department who also used personal email.”

As The New York Times points out, only one other Secretary of State, Colin Powell, “exclusively used his personal email for official communications,” while others—Condoleezza Rice and Madeleine K. Albright—did not.

John Kerry occasionally used the State email server for personal use before being advised against it.

Elsewhere, in Clinton’s statement, she agreed to comply with requests from the State Department, and promises to “embrace and implement” the recommendations in the Inspector General’s report.

“We agree that steps ought to be taken to ensure the government can better maintain official records, and if she were still at the State Department, Secretary Clinton would embrace and implement any recommendations, including those in this report, to help do that.”

Critics from the Republican party, like Trey Gowdy of South Carolina, who chairs the Select Committee on Benghazi, was quick to jump on the scandal, pointing out that Clinton has been less than transparent:

“If anyone wonders why the investigation is not yet complete, the malfeasance and numerous problems identified in this report are Exhibit A, and prove the committee has faced serial delays from day one at the hands of public officials who sought to avoid transparency and accountability,” Gowdy said in a statement.

Republican nominee Donald Trump mentioned the scandal on Twitter saying that it was a “disaster” for her:

The Inspector General’s report on Crooked Hillary Clinton is a disaster. Such bad judgement and temperament cannot be allowed in the W.H.