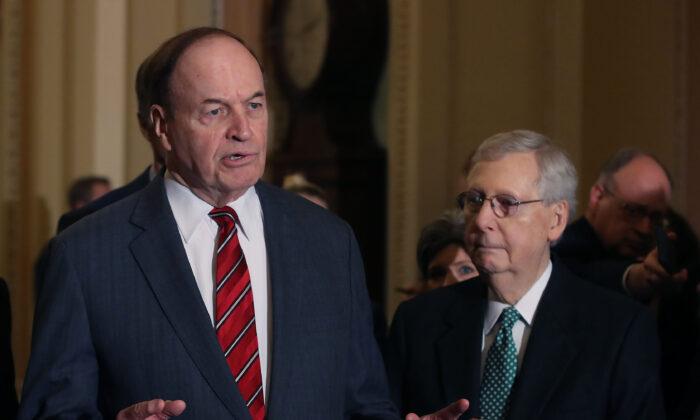 Senate Republicans are split on whether to push Democrats to adopt a measure that funds the government at existing levels until the new Congress convenes in January or agree to a post-election “lame duck session” vote for billions of dollars in new spending.

Because the current fiscal year ends on Sept. 30, Congress must adopt either a continuing resolution (CR) that keeps the federal government’s doors open at current funding levels or adopt a separate spending bill for the same purpose but with added expenditures.

Either way, the key issue is whether to fund the government until the 118th Congress is sworn in on Jan. 3, 2023, or approve a temporary measure that requires another vote after the November election, most likely in December.

The December vote would be the vehicle for additional spending and policy directives.

Spokesmen for two moderate Republicans—Sen. Rob Portman (R-Ohio) and Sen. Lisa Murkowski (R-Alaska)—told The Epoch Times on Sept. 20 that they will support the lame duck session vote. The Ohio senator wants to send additional military aid to Ukraine, while the Alaskan “supports the short-term CR.”

In a Senate evenly divided with 50 Republicans and 50 Democrats (including two independents who vote with them), the support of two GOP senators all but assures Senate Majority Leader Chuck Schumer (D-N.Y.) of being able to have the lame duck session vote.

But the Senate Republican caucus is even more divided on the issue than the defections of Portman and Murkowski suggest.

Sen. Richard Shelby (R-Ala.) is retiring at the end of the current session, but as the top GOP member of the Senate Appropriations Committee, he retains tremendous influence on both sides of the partisan aisle.

Shelby told reporters on Sept. 20 that “we should do our job while we are here,” indicating that he will back the lame duck session vote.

And Sen. Susan Collins (R-Maine) will back the short-term CR because it would clear the way for a lame duck session vote on a separate bipartisan additional spending package, the details of which are still being worked out behind closed doors.

“Every day that we delay is a problem for our national security because it prevents new starts and continues to fund programs that are not worthy of funding,” Collins told The Hill. “It delays the pay raise for our troops.”

Texas Republican Sen. John Cornyn also told The Hill that he will back a lame duck session vote because he believes “it makes sense to try to do our business this year if we can, so we don’t have to start from scratch next year.”

Shelby, Portman, Murkowski, Collins, and Cornyn are lining up with Senate Democrats and against at least 14 of the upper chamber’s most stalwart conservatives. In addition to Shelby, Murkowski and Collins are also members of the appropriations panel.

One explanation for the reticence of Senate Republicans to join the conservative insurgents fighting for the Clean CR is the power of the appropriators.

“Senators are silent on Senator Lee’s push for a clean CR into next year, because they are risk-averse and are more worried about angering appropriators than saving taxpayers money,” veteran Republican congressional aide and legislative strategist Brian Darling told The Epoch Times.

In a “Dear Colleague Letter” circulated on Sept. 19, Lee and his fellow Senate conservatives wrote: “We must not accept anything short of a ‘clean’ [CR] that contains no additional spending or extraneous policy riders. At a minimum, any agreement on a clean CR must carry over into the beginning of the 118th Congress.”

Failing “to stand strong against lame-duck spending and caving to the Democrats will likely worsen inflation, prolong the current economic recession, and advance policies contained in the Biden administration’s progressive wish list. The American people cannot afford another Washington feeding frenzy. We must not let them down,” the letter said.

Conservative activists outside of Congress are also rallying for the Clean CR.

Heritage Action for America Executive Director Jessica Anderson told The Epoch Times that “every single conservative in Congress should take a common sense stance against any short-term continuing resolution setting up a lame-duck funding fight because it will give the left an opportunity to fund their progressive priorities even after being voted out of office.

“Unless our representatives and senators want to see a third year of the Left’s inflationary and woke agenda, they must follow the lead of Senators Rick Scott, Mike Lee, and Ted Cruz in demanding that only a continuing resolution maintaining current spending levels be passed until a new Congress takes office.”

Senate Democrats are rallying their forces to include at least $200 million in added funding for the Federal Emergency Management Agency (FEMA) to help feed and care for illegal immigrants flooding across the Southern border from Mexico in record numbers.

“The Emergency Food and SheIter Program (EFSP) is a vital tool that provides humanitarian aid to migrants and helps the Border Patrol reduce overcrowding at its facilities,” Sen. Chris Murphy (D-Conn.) said in a Sept. 21 statement.

“If Republicans were serious about more effectively managing the border, they would support increased funding for a program that the Border Patrol views as critical.

“Instead, they want chaos, so they cheer on the governors of Texas and Florida as they use millions in taxpayer dollars to exploit desperate and vulnerable people with cruel political stunts.

“I hope my Republican colleagues will put politics aside to support funding in the upcoming CR for a program that provides humanitarian assistance for migrants and their families.”

The Connecticut Democrat is chairman of the appropriations panel’s homeland security subcommittee.

Banks advised RSC members in a Sept. 13 policy brief that Speaker of the House Nancy Pelosi (D-Calif.) views the lame duck session vote as a “last hurrah” for her speakership.

“Over the next three weeks, Democrats plan to attack American energy, increase the deficit and further fuel inflation, give amnesty to tens of thousands of unvetted refugees from Taliban-controlled Afghanistan, strip voters of their say in funding the government for an entire year and further abuse Joe Biden’s permanent pandemic power,” Banks said in the brief.

“This is our last opportunity to explain why Democrats’ agenda has failed, what Republicans will do differently and why voters should give us a governing mandate in November,” he wrote. “Let’s use it.”