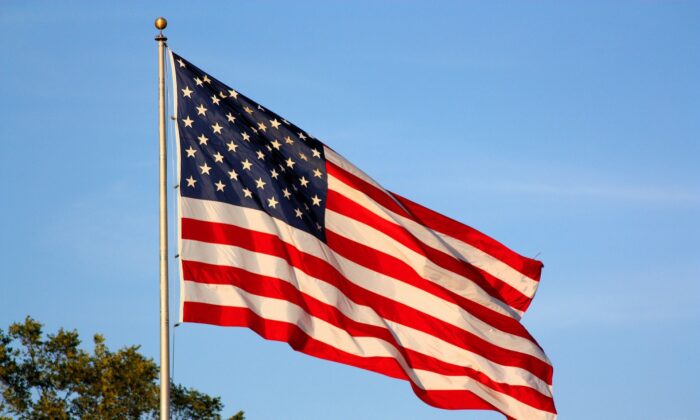 File photo of an American flag. (waggtime/pixabay.com)
US News

A Plainwell, Michigan, high school junior has gone to federal court to fight for his right to talk about his religion.

The case arose when Plainwell High School student David Stout was suspended for three days after expressing his Christian beliefs and opinions in a private conversation with a like-minded student on school property and in private text messages outside of school with friends.

In his conversations and text messages, Stout put forth the biblical teaching of God’s love through Christ for sinners and expressed his own love for his peers. He shared the Judeo-Christian doctrine that homosexual conduct was a sin and that God created only two biological genders—man and woman.

Before being suspended, Stout said he was asked by a faculty member why he hadn’t “self-reported” his sharing of his religious and political beliefs with fellow students to school officials.

Stout also said he was told that talking about religious or political beliefs wasn’t allowed anywhere on campus for fear of hurting someone’s feelings. He said the faculty member told him that he must stop all religious conversations with other students because, if some students overheard such conversations, they might feel offended and unsafe.

Stout said the whole thing seemed to be a one-sided method to shame, intimidate, and silence conservatives and Christians.

The superintendent of Plainwell Public Schools didn’t respond to a request for comment.

The complaint, which was filed on Jan. 27 in the U.S. District Court for the Western District of Michigan, states that the school’s principal and assistant principal told Stout that it was a student’s responsibility to not only stop hurtful comments and behaviors, but to preempt such conduct.

Stout said the administrators warned him that anything he did or said in school, outside of school, or on social media could negatively affect his future employment prospects—a statement that Stout said was a threat.

On Oct. 25, 2021, Stout’s parents received notice that their son had been suspended.

“We have always taught our son to be respectful of everyone’s opinion and to be polite to others. … [He] is entitled to properly express his faith and beliefs without being disciplined and suspended by Plainwell schools,” David’s father, David Stout Sr. said. “We trust the court will uphold David’s constitutional rights and his school record will be cleared.”

The Stouts’ attorney, David Kallman of the Great Lakes Justice Center, said: “David was suspended for three days last fall for stating his Christian beliefs in a private text conversation and in a hallway at school. He is also being punished for not policing and reporting the inappropriate jokes of fellow students. He was instructed to stop posting his religious comments on all his social media platforms and was disciplined for the offensive behavior of some other students; something he was unaware of and didn’t participate in.

“David is a good student with a clean record. Nothing he did caused a disruption or any problem at the school. He has the right to express his opinion in accordance with his religious beliefs without vilification or punishment from the government.”

Stout asked the court for a declaratory judgment that the Plainwell School District violated his First and 14th Amendment rights, as well as his civil rights under the Michigan Constitution and other state statutes. He’s asking that his suspension be expunged from his school record and is seeking compensatory or nominal damages, costs, and attorney fees.