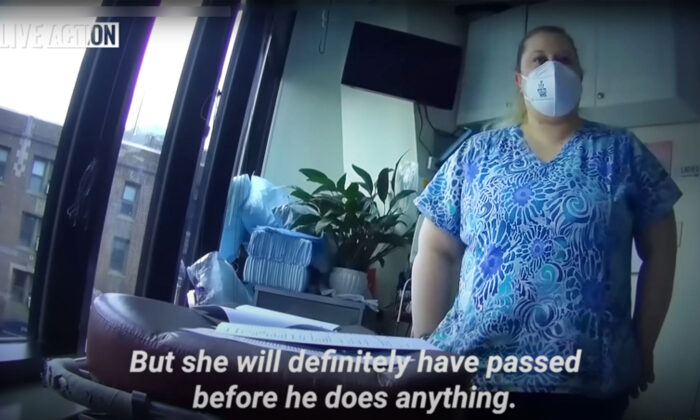 An undercover investigator has obtained hidden camera footage from an abortion clinic in Washington, D.C., that raises grave ethical concerns.

The candid video, taken by a 28-week-pregnant woman, reveals a nurse saying that the babies they abort do not receive digoxin — a lethal injection given to infants in utero during an abortion to ensure the baby is not born alive during the procedure. This increases the chances of a baby being born alive and possibly being illegally killed after birth.

The nurse also told the patient she may deliver the deceased child in her hotel room after the procedure; and furthermore that the doctor would not speak to her until she took Xanax, a mind-altering drug, prescribed by the clinic. This raises ethical concerns about how the clinic obtains proper consent. The patient has since filed a formal medical complaint.

Watch the undercover footage from the D.C. abortion clinic:

“The undercover footage released today shows that the Washington Surgi-Clinic abortion facility is forcing mothers to take mind-altering medications before meeting with the abortionist and giving final consent. This is a likely violation of basic medical ethics, and so the patient has filed a complaint with the D.C. medical board,” said Lila Rose, president and founder of Live Action, in a June 23 press release. Live Action is a leading prolife organization in the United States.

Rose continued, “The footage also provides first-hand testimony that the Washington Surgi-Clinic may kill later-term babies without using a feticidal drug, increasing the chance that the babies would be born alive and then brutally and illegally killed. Whether or not this drug is used, this facility is ending innocent lives through violence. Tragically, this footage also shows the nurse relaying the reality that the patient may be left to deliver her dead child alone in her hotel room.”

The investigator is heard asking the nurse what to expect during the procedure.

Patient: Okay. I didn’t even know.

Nurse: Yeah. She’ll be alive when you go to sleep, but she will definitely have passed before he does anything.

Abortionist Cesare Santangelo, who runs the Surgi-Clinic, has been under scrutiny in recent months after prolife activists found five late-term aborted babies being disposed of as medical waste from the clinic. Some were deemed by medical experts to have likely been viable births.

Live Action shared the experts’ conclusions: An incision behind the neck of one baby girl, between 28–30 weeks’ gestation, indicated she was possibly killed via the federally banned D&X abortion procedure, more commonly known as partial-birth abortion. Her neck was cut and brain removed. An intact baby boy, who may have been nearly full-term, may have been the victim of infanticide. Another baby, found in her gestational sac, may have been born alive and left to die; while two other children, a boy and a girl, about 22 weeks and 28 weeks respectively, were found brutally dismembered, indicating D&E (dilation and evacuation) abortions.

Patient: This is the possibility of labor, basically?

Nurse: You may go into premature labor and deliver the fetus in your hotel.

Patient: Right. What do you tell me to do when that happens?

Nurse: That depends on what happens.

Nurse: He could come and help you take care of it. We could just tell you what to do with the remains. It just depends on what happens.

“This footage also shows the unethical and coerced administration of Xanax prior to seeing the abortionists,” Rose added. “Xanax is a substance that medical experts attest impairs a patient’s ability to give truly informed consent, particularly when a patient is not used to taking the drug.”

Patient: No, not the fetus, just my clarity of thinking.

Nurse: It shouldn’t. I mean, you might be a little sleepy, but other than that …

Patient: Is that not usually how you guys do it?

Nurse: Yeah, that’s unfortunately — cause like I said, we have to make sure that’s in your system before you talk to the doctor. He’s not going to be able to speak with you until he is ready to do it.

The patient has now filed a medical complaint, calling on the D.C. medical board to investigate the apparent unethical activity, Live Action reported.

Experts reviewed the footage and shared their opinions, including Dr. Christina Francis OBGYN CEO-elect of the American Association of Pro-Life Obstetricians and Gynecologists, who said: “Xanax is a substance that, in a patient who is not used to taking it, would most definitely impair her judgment and therefore her ability to give truly informed consent. There is no reason a medication like this should be routinely given to a patient prior to her meeting with a physician and going through the consent process. Often times patients are not allowed to drive or operate heavy machinery for up to 24 hours after even minor procedures due to sedating medications they have received that impair their competence to make complex decisions. Xanax is a clear sedative, especially in a patient naïve to that medication.”

“The footage I viewed indicates a likely ethical violation and could warrant further inquiry due to it demonstrating that patients were required to ingest Xanax before a full medical consultation could occur,” he said. “Being a physician entails profound ethical responsibilities and professional duties to the patient to inform, treat, and care. The physician himself or herself is ultimately responsible to ensure informed consent, in which the patient understands the diagnosis, treatment options, potential outcomes, and possible complications of a procedure or medication. That means being available to the patient to answer any questions the patient has about his or her care. Failure to do so is a dereliction of duty.”

Rose is now calling for the D.C. government, including the mayor, medical examiner, and chief of police, to investigate Santangelo and his facility.

“They are not only killing children through abortion, but they may be committing illegal infanticide, as well as other federal crimes such as partial-birth abortion,” she added. “We demand justice for these babies, and the closure of D.C.’s House of Horrors, the Washington Surgi-Clinic.”