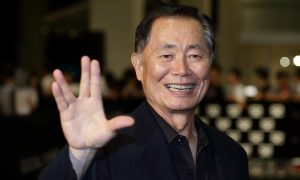 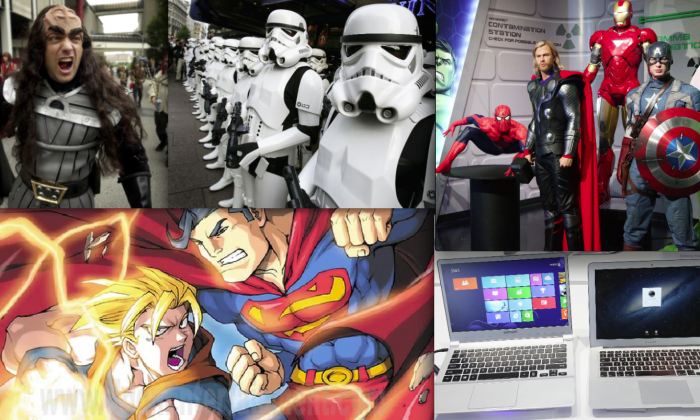 Your Inner Geek: The Top 5 Nerd Debates of All Time (+Videos)

Grab your lightsaber, put on your superhero costume, and set your phaser to stun as you leap into the top 5 nerd debates of all time.

Forget about politics and the economy, THESE are the important issues.

And leave the bars and dinner table behind, because thanks to nerds like yourself we now have the Internet… THE ULTIMATE BATTLE GROUND.

The Internet grants you the right to anonymously tell others just how dumb their otherwise valid opinion really is.

So let’s begin our countdown of the ultimate nerd debates.

Back in the ‘90s and 2000s, it was en vogue to argue over the superiority of your personal computing device.

Spurred on by Apple and Microsoft to create an arms race of “hip” vs “lame,” Apple came to be known as the computer for artists, designers, and free thinkers, while PCs running Microsoft’s Windows were for conformists and stuffy business executives.

The consumers’ choice spoke volumes about their personality, extending by association into their fashion, what type of car they drove, and even their preference of double mocha lattes instead of black coffee.

Modern derivatives of this debate include iPhone vs. Windows Phone and Android, and iPad vs. Surface and Nexus.

Everyone is talking about superheroes these days thanks to Hollywood finally realizing that people like watching them. And the rivalry between the two largest comic book companies, Marvel and DC, is still alive after decades of debate.

What’s the difference between Marvel and DC?

The short answer is not much.

The long answer is a cataclysmic collision of worldviews.

In DC, there were goody two-shoes superheroes like Superman who were invincible and could do whatever they wanted. Fans lost interest because what’s the point of reading about a guy who can never lose? But their ideals and messages still had value.

Then along came Marvel who introduced characters with weaknesses, psychological drama, and backstories filled with pain and reconciliation. In other words, heart. You know, the interesting stuff.

Comic book nerds chose sides, drawing a line in the sand that, while a little blurry from the waves of time, is still visible today. But instead of arguing over values, they argue over who can beat who.

Can the Hulk defeat the Thing? Can Spider-Man beat the Flash?

Because we’ve been branded like cattle, an evolution of the Mac vs. PC debate premiered in the late 2000s with the “I’m a Marvel. I’m a DC” series of videos on YouTube.

My opinion: I read both in my childhood, but to me “DC” meant men in costumes, and “Marvel” meant men who just happened to be wearing costumes. See the difference? Thanks to good storytelling in recent years, both are good.

The BBC’s long-running TV series “Doctor Who” is considered a classic science fiction series and has fans across the world.

He’s a Time Lord who goes into a British Police Box of infinite space called the TARDIS (Time and Relative Dimension(s) in Space) and solves problems through time travel. He battles killer Dalek robots and sometimes his own companions.

But there’s more than 1 Doctor.

If a Time Lord sustains a mortal wound, he regenerates taking on a new physical form—enter the next actor to assume the role of Doctor, in a continual line of Doctors.

As a result, fans argue over which Doctor is “the best Doctor.”

My opinion: I have no opinion because I’ve never seen the show, but my editor tells me it’s the Fourth Doctor, Tom Baker, who played the character for seven years. She says, “He’s the best. Hands down.”

Superman is The Man of Steel, while Goku is the martial artist with the unstoppable will to persevere.

Everyone knows the Superman story, but if you’ve never heard of Goku, then know that he is the hero of the world’s most recognized Japanese anime and manga, Dragon Ball (also called Dragon Ball Z). He is a fighter with incredible powers and an innocent purity that has garnered millions of fans.

The major difference between them is that while Superman is gifted with his powers by the sun, Goku earns his powers by training with dedication and enduring the impossible.

So the ultimate question is who would win in a fight?

Fans of Goku and Superman have debated this issue since the late ‘90s when Dragon Ball Z premiered on TV, and nerds have raged out on every possible nitpicky detail for over a decade.

In January 2013, the website ScrewAttack.com premiered the “definitive” answer to the question. A 30-minute, fully animated and voice acted DEATH BATTLE, where only one man could survive.

But not only did the DEATH BATTLE not settle the issue in the minds of diehard fans, it added fuel to the flame war across the Internet that now burns with even greater intensity.

Who do you think should win?

My opinion: As a professional consultant for this video on the side of Goku, I choose Goku!! He can burst through any limit!

The biggest nerd debate of all time, Star Trek vs. Star Wars is like the battle between the North and South during the Civil War. Fans hurl insults at one another as if being attacked by Wookies while their warp drives are malfunctioning.

Star Wars is the #1 pop culture phenomenon ever, having generated over $31 billion in revenue, 6 feature films, and an endless amount of toys, games, books, and merchandise.

Star Trek is the 4th largest pop culture phenomenon in the world, having generated over $5 billion in revenue from its own line of TV series, films, and tie-ins. But where it pales in comparison in the number of fans, it more than makes up for it with the sheer dedication of those fans.

For example, Star Trekker’s (not Trekkie’s) have created and mastered their own Klingon language and culture, and have attempted to transform the politics of Star Trek into a real world system.

Not to be outdone, Star Wars fans have their own religion, The Jedi Order, also called Jediism, where fans attempt to live like a Jedi and master the Force by following Yoda’s wisdom or Darth Vader’s malice.

Both are science fiction classics, but Star Trek has a realistic, far-future tone, while Star Wars is an epic, archetypal Hero’s Journey.

The series are so large that there are mini-debates within this debate, such as lightsaber vs. phaser, and Star Destroyer vs. Enterprise.

My opinion: As much as I enjoy Star Trek’s science, Star Wars wins because it has the Force, which triumphs over Vulcan logic.

Are Mac’s better than PC’s? Can Goku beat Superman? And is the Force more powerful than logic?

Let your inner nerd shine in the comments.

About the Author: Derek Padula is a professional nerd and was a consultant on the side of Goku in the Goku Vs. Superman debate. His books about Dragon Ball can be found at The Dao of Dragon Ball.