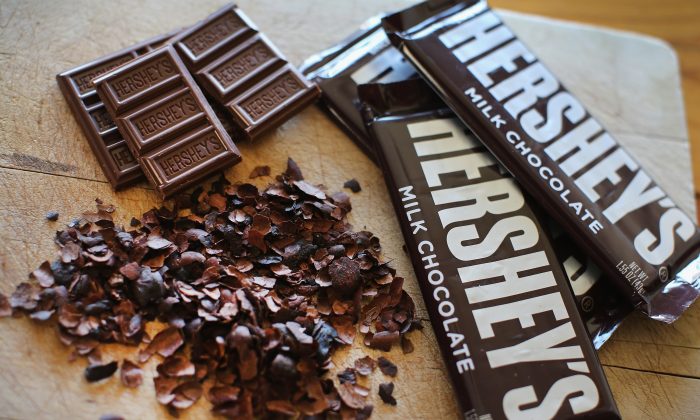 The Hershey Co. has begun firing office workers who have declined to be vaccinated against COVID-19.

On the way out the door, the candy manufacturer is asking the fired employees to sign a nine-page confidentiality and release agreement that would remove their rights to sue the company or talk about their experience.

While their signature comes with a “special separation payment,” many haven’t signed the agreement and won’t get the money. Employees say the payment was determined by an algorithm, and for some, amounted to just over two months’ pay.

By most accounts, working at Hershey was a great job. Employees at the company’s headquarters in Hershey, Pennsylvania, and at offices in other states report higher than average wages and bowls of candy placed around the offices for snacking. For holidays, employees would get a big bag of treats to take home, although that practice stopped after Easter 2021. There’s a sample room for trying new products, colorful graphics decorating the walls, and the products are more fun than selling insurance.

But it stopped being fun after months of human resources department meetings that employees say included education about the vaccines, asking if the employee had changed their mind about getting the shots, as well as uncomfortably invasive questions.

“I really thought I’d be OK,” Kim Durham, a former payment analyst and sourcing buyer, told The Epoch Times. “I thought, you cannot question my faith. Nobody can question that.”

Durham asked for a religious accommodation in August and assumed she would get it.

“I thought this was behind me until September, when I met with an HR representative. It was an interrogation on your religious beliefs. They twisted your words and tried to put words in your mouth. It was terrible.

“I was asked such personal questions that had nothing to do with religion.”

She was shocked when, in November, she received word that her request for religious accommodation had been denied.

The Epoch Times interviewed two other Hershey employees who are in their final days with the company and didn’t want their names used until they are fully separated, for fear of losing certain benefits.

All who were interviewed mentioned being troubled by similar questions during the meetings, usually held with an immediate supervisor and someone from HR, such as: Have you ever been vaccinated? Are your children vaccinated? How do you protect yourself when you leave your home? How often do you go to church? Do you take Tylenol, ibuprofen, Tums, or Midol? If so, how can you say that you’re truly a religious person, because a lot of those medicines also have the same ingredients as the vaccine?

Meanwhile, several people were told that the pope is vaccinated, and that he says the greatest gift you can give your community is to be vaccinated as well.

One new parent submitted their baby’s birth certificate and other papers to set up insurance coverage, and was asked why the baby had received vaccinations if the parent wouldn’t get the COVID shots.

“What does that have to do with me keeping a job? From the time we started this ordeal, we have had seven meetings about my vaccination status,” one employee said. “It was like harassment. I felt like I wanted to crawl under a rock when I was done.”

While office workers must be vaccinated or face dismissal, employees working in food production and Chocolate World, the company’s retail outlet stores, are encouraged but not required to get the vaccination.

Durham had been working from home since March 2020, except for once every two weeks when her tasks required her to be in the office. But even when she was there, it was just a skeleton crew of in-person coworkers, everyone had a temperature check before entering the building, and masking was mandatory.

Hershey required employees to be vaccinated by Oct. 4, 2021, and when she was still unvaccinated on Oct. 5, Durham was told she was no longer allowed in the building, but she continued working until January. Following her last day, the company sent an empty box to her home so she could ship her work equipment back to them.

“We are losing our jobs over this vaccine policy,” Durham said. “It’s just wrong that a company can terminate you, and you lose your livelihood. This should not be forced.”

Hershey’s separation agreement prohibits those who sign it from disclosing the existence, terms, and conditions of the agreement, including the details of their separation from employment. The agreement contains a broad non-disparagement clause and also releases Hershey from liability for all legally waivable claims.

Hershey didn’t respond by press time to requests for comment or to provide information about how many people have been fired.

Employees estimate that 1,400 workers applied for a religious exemption. It’s unknown if any were granted.

“I know people who got the vaccine just to keep their job. It wasn’t something they wanted to do, but they needed the job,” Durham said. “I need a job too. But I’m not going to do something I don’t feel comfortable doing, just keeping my job.”