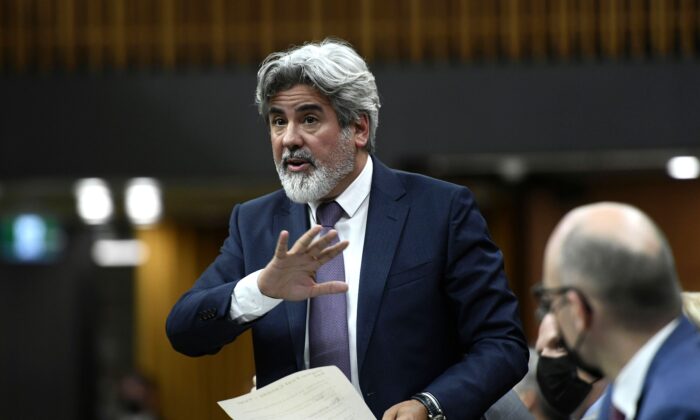 Minister of Canadian Heritage Pablo Rodriguez rises during question period in the House of Commons in Ottawa on May 31, 2022. (The Canadian Press/Justin Tang)
Canada

Is user-generated content covered by the Liberal government’s revamping of the Broadcasting Act through Bill C-11? It depends who you ask.

When Heritage Minister Pablo Rodriguez testified before the House of Commons Standing Committee on Canadian Heritage on June 6, he insisted several times that Canadians who post content online should not be worried about falling under the regulating powers of the Canadian Radio-television Telecommunications Commission (CRTC).

“Absolutely, it is not,” Rodriguez answered when asked by Liberal MP Anthony Housefather if content is regulated by Section 4.2 of the bill.

“There’s people that try to make others believe that the CRTC is there, and the government through the CRTC, that we want to know what people produce, and if the videos are fine or not, and if we’re not happy with it, we’re going to take it offline. No, no,” said Rodriguez.

“The CRTC said it before: They’re not interested in that content. The only thing we’re looking at is what becomes part of commercial content, and that is defined in criteria 4.2.”

CRTC Chair Ian Scott, who testified before different parliamentary committees in recent days, echoed Rodriguez’s remark that the CRTC is not interested in regulating user-generated content, but contradicted him on what powers the bill provides.

“[Section] 4.2 allows the CRTC to prescribe by regulation user-uploaded content subject to very explicit criteria. That is also in the act,” Scott told the House of Commons Standing Committee on Canadian Heritage on June 1.

On May 18, he told the same committee that “as constructed, there is a provision that would allow us to do it [regulate user-generated content] as required.”

In short, Section 4.2 of the bill says content will fall under CRTC regulations if it is uploaded to a platform and generates revenues, if it can be found on different platforms, and if it has been assigned a unique identifier.

Conservative MP Rachel Thomas pressed Rodriguez repeatedly during the June 6 committee meeting on the issue of revenue, and asked if there would be a determined threshold.

“What is that revenue that you’re looking for in order to know whether or not it’s going to be regulated?” she asked.

“It has nothing to do with a number,” Rodriguez said, implying that anything generating any kind of revenue would fall under regulation.

Rodriguez told the committee he is concerned about the “amount of misinformation” shared by some Conservatives around Bill C-11.

“They take this bill and they create a parallel debate about things that don’t exist in the bill. That is what worries me,” he said.

“His defence falls apart on close examination of the bill,” wrote Geist on his website on June 7.

“Numerous witnesses, including digital creators, Internet platforms, and industry associations, have all expressed concerns about the issue. Rather than respond to them, Rodriguez and the government implausibly deny that the issue exists at all.”

Conservative MP and Canadian heritage critic John Nater said on June 6 his party is proposing amendments to the bill, including the removal of Section 4.2 and “any provision that enables the inclusion of User Generated Content.”

Nater also wants to see a financial cap on the size of businesses the bill will be applied to.

“What has become obvious is that C-11 cannot be allowed to proceed in its current form,” Nater said in a statement.

The Liberals have framed C-11 as a means to level the playing field between Canadian media producers and large streaming giants, and to protect Canadian culture.

The heritage minister said the bill will provide the government with $1 billion in annual revenue.

“The objectives are clear: more money for indigenous productions and marginalized communities, in both official languages,” he said regarding how the government intends to spend that money.