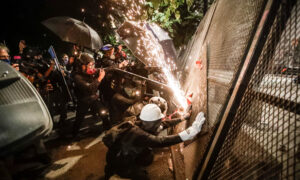 Stephen Moore, the distinguished visiting fellow at The Heritage Foundation’s Project for Economic Growth, sat down with NTD, part of the Epoch Media Group, to discuss the trade war with China.

NTD: At a public hearing held by the United States International Trade Commission on President Donald Trump’s tariffs on Chinese goods, companies testified that they couldn’t move supply chains from China that had taken decades to build back to the United States, and consumer-product companies said they aren’t making the high-tech products that the U.S. government is concerned about. Should these objections cause a rethinking of the administration’s policy of tariffs?

Stephen Moore: I don’t see Donald Trump backing down from this tariff that he is proposing unless there are real changes and concessions in the way that China trades. The big complaint that I’m hearing from the Trump administration is that it’s so difficult for American companies to penetrate the China market. And there is a strong feeling that the playing field isn’t level, that U.S. tariffs have fallen substantially more than China’s tariffs, and that the non-trade barriers for American companies to do business in China are just very high and very hard to get over.

So, this is mostly about forcing China to open up its markets to American products. And, frankly, China hasn’t done a good job in that regard. Until that happens, I don’t see Trump being persuaded by these arguments that, well, you know we have supply chains and so on because those are all legitimate arguments; but at the end of the day, you know supply chains can change. I don’t think those will be persuasive arguments with the Trump administration, and I don’t see Trump backing down here.

NTD: So is the tactic of raising tariffs on China working?

Mr. Moore: We will see. It’s too early to say whether it’s working or not, but I think it will work. I think that Beijing will have to make some real concessions that deal with intellectual-property theft, that deal with opening access to Chinese markets to American goods and services. And so I’m kind of cautiously optimistic that there will be a deal before the end of the year, and it might come before that, that will actually lead to freer trade between the two countries, but will increase American exports to China.

NTD: On Aug. 13, the president signed the National Defense Authorization Act of 2019. What about that stood out for you?

Mr. Moore: Trump is very worried about the transfers of technologies to countries like China and Russia that could be used for military reasons. So there are going to be restrictions on what kind of technologies can be transferred and that’s not just a matter of economic security, but it’s also a matter of national security for the United States. And I think that Trump feels very strongly about that, as do all the people in his administration.

NTD: Do you think there has been a major overhaul of China policy under President Trump?

Mr. Moore: Certainly there has been. This is the first president in 30 to 40 years that’s really confronted China in a very nose-to-nose way. One of the things that Trump campaigned on when he ran for president is that he would get tough with China.

And that was popular with a lot of American voters. They do believe that China isn’t playing by the rules. A lot of Americans believe that factories are leaving the United States or shutting down because of China. There’s no question that this is a brand new China policy that Trump has brought to Washington.

But my point is that this is popular with voters. There’s a lot of angst and a lot of fear of China in the United States. And Trump has tapped into that. He wants better deals with China, and I think that’s where the American people are, too.

The way I see it, for the last 30 years or so, the United States has really opened up its markets in a big way to China to allow China to grow and prosper and become a more capitalist country, as it moved away from communism.

But there is a concern within the Trump administration that China has actually moved in the other direction in the past number of years and is becoming more of an economy based on central planning, an economy that is stealing American technology and not paying for it.

NTD: In China expert Michael Pillsbury’s new book, “The 100-Year Marathon,” one central argument is that America has been wrong about China over and over again for the past 40 years. He says mainstream China experts have several false assumptions about China such as that engagement brings complete cooperation, China wants to be like the United States, and China is on the road to democracy. Do you agree with Pillsbury?

Mr. Moore: I think that Americans were under a false assumption that China would continue to advance towards more economic and political freedom as it became richer; I believed that myself.

But I look at China today and I still see a lot of political repression, I see a tighter control of the society by Beijing, and this is more of a central-planning, state-ownership model. And that’s not a march toward freedom, and it’s not a march toward free-market capitalism. And so I think America has to rethink its strategy with respect to the Chinese economy, because China has become more of a military and an economic threat to the United States.

NTD: Why has America been wrong about China?

Mr. Moore: Well, it’s a cultural difference, right? Remember China was pretty closed off to the United States during the Mao era. We didn’t have any relations with China. So you know this is a cultural difference between the way China governs and the way the United States governs. And I think that we’re now discovering things about China and the Chinese government that we didn’t know about before.

I think Trump is a realist when it comes to China. You know it’s one thing to hope that China does certain things and that’s an aspirational goal. But we have to take China as it is acting now, and China hasn’t been acting as a friendly nation to the United States for the last decade or so. China is the country that facilitated the North Korean nuclear weapons program. China is becoming more imperialistic in terms of taking over land and islands and in the Asian region of the world. China is building up its military. Those are things that are very concerning to the United States

NTD: Overall, do you think what President Trump is doing about China is on the right track?

Mr. Moore: Yes, absolutely. I think Trump has to get very tough with China. I think we can’t live with the status quo.

We can’t continue to have a situation where we buy $500 billion of goods and services from China and they only buy $150 billion from us. I don’t think we can live with the intellectual-property theft of $200 billion or $300 billion a year. I think we’re going to have to demand that China pay us for our intellectual property, and we can’t tolerate China continuing to grow its military and grow its ambitions in the Asian area.

For example, Taiwan is a big issue, and there’s a lot of nervousness about whether at some point China is going to militarily take over Taiwan and those kinds of things. We have to stand up with Taiwan, and that’s something that China’s government in Beijing is opposed to.

NTD: Pillsbury, before he wrote his new book, was thinking that because we have been wrong about China for so long that it’s almost too late to do anything anymore. Do you agree?

Mr. Moore: I don’t believe that. It’s never too late to change things. The United States has an upper hand right now in its relations with China because our economy is really booming, and China has had some economic problems of late.

Now, that’s not to say we don’t both benefit from trading with each other, but, so far, China is benefiting a lot more than the United States is. And Trump is going to play that Trump card to try to get some very serious concessions from China in the months ahead.