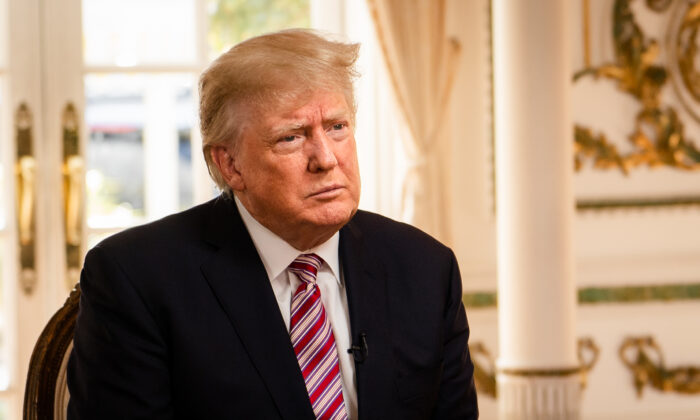 Former President Donald Trump at his Mar-a-Lago resort in Palm Beach, Fla., on Jan. 31, 2022. (The Epoch Times)
By Jack Phillips

U.S. District Judge Raymond Dearie will serve as the independent arbiter to review documents that were taken from former President Donald Trump’s Mar-a-Lago home, according to a federal judge’s order on Thursday.

Dearie, 79, was the only candidate for the special master role that both Trump’s team and the Department of Justice (DOJ) agreed on. In a separate order, Judge Aileen Cannon ordered the DOJ to stop its review of the materials that were taken from Trump’s Florida residence last month, while the DOJ has indicated it will appeal.

With the order, Dearie will “review all of the materials seized” during the FBI raid and will have to verify documents in a property inventory to reflect the “property seized.” The judge also is tasked with carrying out a “privilege review” of the items that were taken and has to inform the court if there are “privilege disputes between the parties.”

Dearie was appointed by President Ronald Reagan in 1986 for New York. He retired in 2011 and is now a senior judge in the district.

Notably, he served on the Foreign Intelligence Surveillance (FISA) court for several years. He was one of several judges who approved warrants for the FBI’s surveillance targeting former Trump aide Carter Page in 2016 as part of the bureau’s Crossfire Hurricane investigation, which triggered Trump’s allegations of malfeasance against the federal law enforcement agency.

A separate judge released more portions of the affidavit used to secure the Mar-a-Lago search warrant, showing that some of the documents seized at Trump’s home were labeled “FISA,” indicating they relate to information that was derived from foreign sources. It’s not clear if those documents pertained to the Page investigation, though Trump and a former top aide of his, Kash Patel, have indicated that he declassified records relating to Crossfire Hurricane.

After the special master ruling Thursday, Dearie was praised by lawyers who had argued cases in front of him.

The judge is “one of the few judges who both sides want to appear in front of. He is held in the highest regard by attorneys. He’s someone who actually listens to the lawyers and considers what they have to say before he makes a decision,” Lindsay Gerdes, a former Brooklyn federal prosecutor, told Politico.

“He works incredibly well with parties, but doesn’t tolerate nonsense,” Richard Garbarini of Garbarini Fitzgerald P.C. told the news outlet. “He will not allow parties, or attorneys, to play games, or play fast-and-loose with the rules.”

Trump’s lawyers objected to both the DOJ’s submissions, while government prosecutors objected to Huck but agreed with the Dearie proposal.

At the same time, while the DOJ submitted its picks in the special master case, it simultaneously asked Judge Cannon to throw out the order. Prosecutors argued that a special master is unnecessary because the DOJ’s filter team already carried out a preliminary review of the Mar-a-Lago documents, while the order would impede its investigation of Trump.