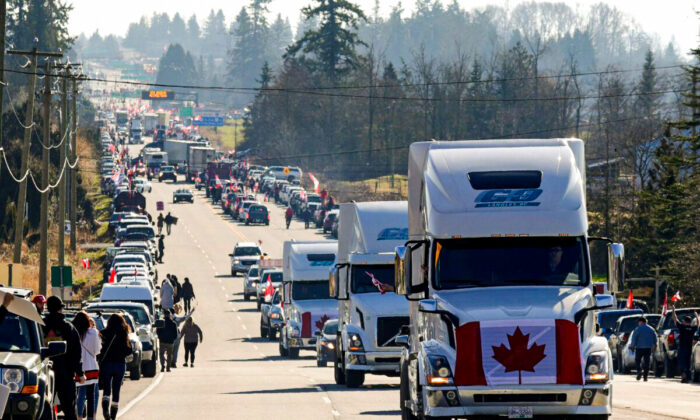 Trucks and other vehicles drive on Highway 15 near the Pacific Highway Border Crossing, as part of a protest convoy demonstrating against COVID-19 mandates and restrictions, in Surrey, B.C., on February 12, 2022. (Jason Redmon/AFP via Getty Images)
Canada

‘Here for the Long Haul’: Convoy Protest Digs In at BC–Washington Border Crossing

SURREY, B.C.—Despite the Royal Canadian Mounted Police’s (RCMP) redoubled efforts to prevent a convoy of trucks and other vehicles from establishing a stronger presence at the Pacific Highway Border Crossing in Surrey, British Columbia, one truck managed to get through the police blockade.

On Feb. 12, an initial surge of about 20 commercial and personal vehicles had broken through the blockade before police reinforcements were quickly dispatched to halt access to the intersection eight blocks north of the border, later expanding it to 16 blocks.

The sole truck, a white Ford F-350, was immediately swarmed by police on foot to prevent the driver from advancing.

However, protesters locked arms and circled the police after a rousing singing of “O Canada,” while others cleared hundreds of people to allow the driver a narrow passage on the road leading down to the other trucks, which had crossed before the RCMP strengthened the blockade.

The driver, who didn’t provide his name, told The Epoch Times that his entry into the “forbidden zone” was necessary to demonstrate the importance of the ongoing convoys and protests at other border crossings and in Ottawa.

“I’m here for the long haul,” he said. “Everybody should be off the couch and down here. What else are we going to do if we don’t stand up now for our freedoms?”

Colby Seiz was the first to make it through the blockade on Feb. 12 with his massive Oshkosh rig.

“I just started driving and regular Canadians started to open it up,” Seiz told The Epoch Times. “It was like Moses and the Red Sea just parted ways, and we were able to go.”

All feeder roads north of the U.S. border also were clogged as vehicles in the convoy tried to find alternative routes to reach the rally, forcing many to park more than a kilometer away and walk in, or give up and go home.

Although the main route to the Pacific Highway border crossing was closed on Feb. 12, the border remains open. The Canada Border Services Agency said travelers should use “an alternative processing site” until the road clears.

Regarding breaking through the blockade, the RCMP said in a statement that such “behaviour is not being tolerated,” and is being investigated.

The vast majority of the protesters remained behind the police barriers, playing loud music and displaying signs that demand an end to COVID-19 mandates and restrictions.

Carrying a Canadian flag, Pam Banks was one of those who believed she needed to make her way to the border.

“I’m here fighting for our freedom in Canada,” she said in an interview. “I’m fighting for my grandchildren to grow up the way I grew up. I just want my country back and I’m here supporting everybody.”

Warrant Officer James Topp, who was recently released from Canada’s Reserve Force because he refused to take a COVID-19 vaccine, said his mission now is to raise awareness of the threat to Canadians’ freedoms.

“This is difficult for me because of the heat and light that will probably be put on me because of what I’m doing right now, but I think it’s the right thing to do,” he told The Epoch Times, emphasizing that he’s speaking individually and not representing the armed forces.

“I’m here because I am taking a stand against government mandates being imposed on Canadians who choose not to receive a vaccination in order to work,” he said.

Topp is going to walk to Ottawa, leaving Vancouver on Feb. 20, and will possibly be joined by others along the way. He’s developing the website www.canadamarches.ca to chronicle his journey.

“The intent is to create a pebble in the pond and hopefully, have a wave go out in front,” he said.

Support for the Pacific Highway border protest crossed into the United States; a handful of Americans walked up to the Canadians from their border town of Blaine, Washington, holding U.S. flags and shouting encouragement.

Meanwhile, an American convoy of about two dozen commercial vehicles drove along Interstate 5 to offer support for the Canadian protest, according to Marcella Willia, who was one of the speakers at the rally.

“This is support. This is family, and we are united,” Willia said in a passionate speech, mixed with excerpts from the Canadian Charter of Rights and Freedoms. “Thank you to our Canadian truckers, and can I also say thank you to the truckers whose eyes are on Canada.”

Kanwaljit Singh is the co-founder of the Sikh Freedom Alliance, a group dedicated to achieving freedom for all humanity. In Canada, he and his group are ardent supporters of the truck drivers and their efforts to have government mandates dropped. But his support has additional motives.

“The media has been labeling these protests and this movement as white supremacists in a racist movement, so I want to defeat that divisional message,” he said in an interview.

“You cannot label us like that. So that will defeat the message when they look at me,” Singh said. “Supporting the truckers, we want to be a part of that because it’s for all of us.”

Singh said he has spent the past two months speaking to people in the Sikh community, who virtually all want the mandates to end but are often afraid to speak out. So he is willing to do it for them.

He said people in the community are worried they will lose their jobs or lose their ability to fly to India, and for those trying to become Canadian citizens, speaking out publicly against government restrictions might jeopardize that chance.

“That’s why they’re painting this as racist, because if the minorities stand up with the mainstream population to form unity against these mandates, the government will fold,” Singh said.

Seiz summed up the attitude of the several thousand people who managed to make it to the border.

“Canadians just want freedom,” he said. “They want to be free and not be told what to do.”

The Canadian Press contributed to the report.