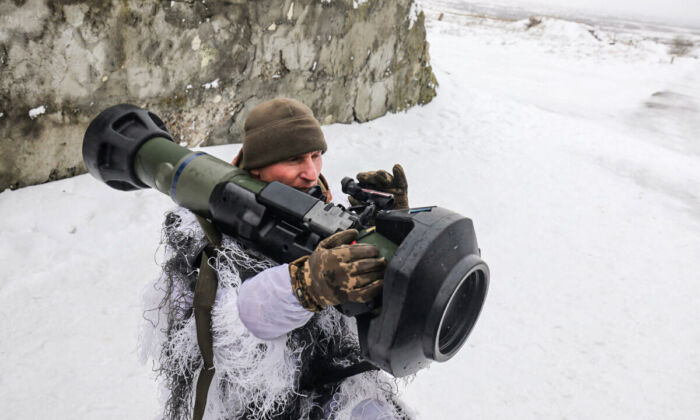 A Ukrainian military serviceman aims with a next generation light anti-tank weapon (NLAW), a Swedish-British anti-tank missile launcher, during a drill at the firing ground of the International Center for Peacekeeping and Security, near Lviv, Ukraine on Jan. 28, 2022. (AFP via Getty Images)
Russia-Ukraine War

Two days after Russia fired the first shots on Ukraine on Feb. 24, President Volodymyr Zelensky shared a video saying he needs “ammunition, not a ride,” referring to the U.S. offer of asylum to the besieged head of state.

Since then, 15 countries have sent military hardware to Ukraine amid Russia’s continued invasion.

The majority of arms and supplies from ally nations are being sent via Ukraine’s 310-mile border with Poland, which has become an important lifeline for both supplies and equipment and for refugees looking to flee the conflict.

Some border nations have chosen to not allow military equipment bound for Ukraine to pass through their territory out of fear of Russian retaliation.

On Feb 28, Hungarian Foreign Minister Peter Szijjarto said his country wouldn’t allow “deadly weapons” to be transported through Hungary’s territory while reiterating that the government doesn’t want to be involved in the Russia–Ukraine war. Szijjarto cited security concerns for Hungarian citizens as one of the primary factors in the decision.

Despite supply chain and shipping challenges, millions of dollars of ordnance continue to flow into Ukraine from two continents.

On Feb. 26, U.S. President Joe Biden authorized the State Department to send $350 million in weapons to Ukraine. Among the hardware on the list are Javelin anti-tank weapons, anti-aircraft systems, ammunition, and body armor.

McKernan then stated, per Biden, that neither the United States nor NATO had any desire or intention to engage in a conflict with Russia, clarifying that there’s no threat to Moscow from either.

This is the third time Biden has used his presidential drawdown authority to send emergency security assistance, now totaling $1 billion, from U.S. reserves to Ukraine.

“It is another clear signal that the United States stands with the people of Ukraine as they defend their sovereign, courageous, and proud nation,” Secretary of State Antony Blinken said.

The Canadian government approved an additional $25 million in military aid to Ukraine on Feb. 27.

Canadian Prime Minister Justin Trudeau announced that the country would send $7.8 million worth of “lethal equipment” to the European nation during a Feb. 14 press conference, in anticipation of a Russian attack.

“The intent of this support from Canada and other partners is to deter further Russian aggression,” Trudeau said regarding the initial shipment.

German Chancellor Olaf Sholz announced on Feb. 26 that Germany would deliver 1,000 anti-tank weapons and 500 Stinger missiles to “our friends in Ukraine.”

Scholz said that Feb. 24 marked “a watershed in the history of our continent,” asserting that Russian President Vladimir Putin is jeopardizing the long-term security of Europe, which he said can’t be achieved in opposition to Russia.

In a departure from its decades-long neutrality, the Swedish government approved the shipment of 5,000 anti-tank weapons, 135,000 field rations, 5,000 helmets, and 5,000 pieces of body armor.

“My conclusion is now that our security is best served by us supporting Ukraine’s ability to defend itself against Russia,” Swedish Prime Minister Magdalena Andersson said on Feb. 28.

She said this was the first time Sweden had sent weapons to a country at war since the Soviet Union attacked Finland in 1939.

On Feb. 26, an army spokesperson said France would send “defensive military equipment” to Ukraine to aid in the resistance effort against Russia.

“It’s not only the Ukrainian people who are bereaved by the war … it’s all the peoples of Europe,” French President Emmanuel Macron said.

On Jan. 17, UK Secretary of Defense Ben Wallace said the UK would provide “self-defense” weapons and training to Ukraine amid the build-up of Russian troops near the border separating the latter two countries.

“In light of the increasingly threatening behavior from Russia and in line with our previous support, the UK will shortly be providing a further package of military support to Ukraine,” Prime Minister Boris Johnson told Parliament on Feb. 23.

Responding to a direct request from Kyiv, the nation opted to send 2,000 machine guns to the Ukrainian army and 3,800 tons of fuel on Feb. 26.

As of Feb. 26, the Dutch government has said it’s delivering 50 Panzerfaust 3 anti-tank weapons with 400 missiles to Ukraine to help with the resistance effort against Russia. Additionally, 200 Stinger anti-aircraft missiles were promised, along with helmets, shard vests, and sniper rifles.

Formerly occupied by Russian troops during the Soviet era, the Czech government sent 4,000 artillery shells worth $1.7 million to Ukraine in January. The Czech Ministry of Defense released a statement on Feb. 26 saying it would also ship machine guns, submachine guns, assault rifles, and pistols together with ammunition at an estimated value of $8.6 million.

The Balkan nation sent “defense equipment” and medical supplies on two C-130 aircraft from Athens on Feb. 27 at the request of Ukrainian authorities.

On March 2, Spanish Minister of Defense Margarita Robles announced that the nation would send defensive equipment to Ukraine.

“In this first shipment that will go aboard two planes, we expect to send 1,370 anti-tank grenade launchers, 700,000 rifles, and machine-gun rounds and light machine guns,” Robles said.