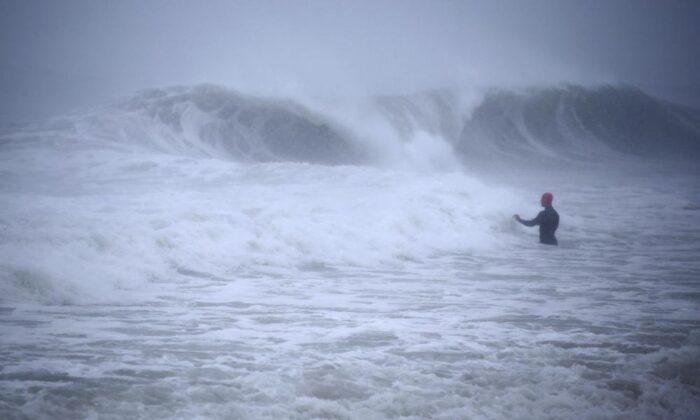 Matt Prue, from Stonington, Conn., walks out into the Atlantic Ocean to body surf the waves from Tropical Storm Henri as it approaches Westerly, R.I., on Aug. 22, 2021. (Stew Milne/AP Photo)
US News

Tropical Storm Henri, which has winds of 40 miles per hour, made landfall along the coast of Rhode Island on Aug. 22 and is continuing to track north in New England, according to the National Hurricane Center (NHC).

The storm was continuing to weaken, according to a 5 p.m. ET update from the agency on Aug. 22. Tropical-storm-force winds spanned a 125-mile stretch from the center of Henri at that time.

“On the forecast track, Henri is expected to slow down further and possibly stall near the Connecticut–New York border tonight, with an east-northeastward motion across northern Connecticut and southern Massachusetts expected on Monday,” the NHC stated at 2 p.m. ET on Aug. 22.

The storm, which was downgraded from a Category 1 hurricane, made landfall in the town of Westerly, Rhode Island, at 12:15 p.m. ET on Aug. 22, according to the NHC.

President Joe Biden said later that day, at 4 p.m. ET, that “thousands of additional line crews” from out of state and Canada were heading to the northeastern United States to “restore electrical service as fast as possible.”

“While New Englanders are used to dealing with some tough weather, this storm has the potential for widespread consequences across the region with significant flooding and power outages that could affect hundreds of thousands of people,” Biden said during a briefing.

The most devastating effects from the storm now appear to be heavy rain and flash flooding.

“Henri is expected to produce storm total rainfall of 3 to 6 inches with locally higher amounts expected over portions of Long Island, New England, southeast New York, New Jersey, and northeast Pennsylvania Sunday into Monday,” the NHC stated. “Isolated maximum totals of 10 to 12 inches are possible across northern New Jersey into southern New York. Heavy rainfall from Henri will continue to result in considerable flash, urban, and small stream flooding, along with the potential for additional minor to isolated moderate river flooding.”

More than 75,000 residents in Rhode Island were without power as of Aug. 22, according to PowerOutage.us. That figure is expected to rise as the storm moves further inland. There were also mass outages reported in Connecticut.

There were few early reports of major damage due to wind or surf, but officials warned of the danger of spot flooding in inland areas over the next few days.

Driving surf and sheets of rain scoured the beach towns of southern Rhode Island as the storm approached, leaving some coastal roads nearly impassable. Some small trees had already fallen to the winds and rain, which had swollen local inlets and creeks.

In preparation for the storm, officials in Providence, Rhode Island, and New Bedford, Massachusetts, closed giant hurricane barriers that were built in the 1960s, after devastating storms hit the region in 1938 and 1954.

While the wind was significant in certain areas, experts warned that the storm’s largest threat likely will come from storm surge and inland flooding, caused by what are expected to be heavy and sustained rains. Some of the highest rain totals were expected inland.

Rainfall in the Catskill Mountains located near the Hudson Valley “is a significant problem,” outgoing New York Gov. Andrew Cuomo said in a news conference. “In the Hudson Valley, you have hills, you have creeks, the water comes running down those hills and turns a creek into a ravaging river. I have seen small towns in these mountainous areas devastated by rain. That is still a very real possibility.”

The National Weather Service office in New York issued a flood watch until 8 p.m. ET on Aug. 23, with the service saying that between three and five inches of rain are forecast for the metropolitan area.

Biden, who is also dealing with the fallout of the chaotic Afghanistan pullout, is scheduled to address the country on Henri and other crises on Sunday afternoon at 4 p.m.