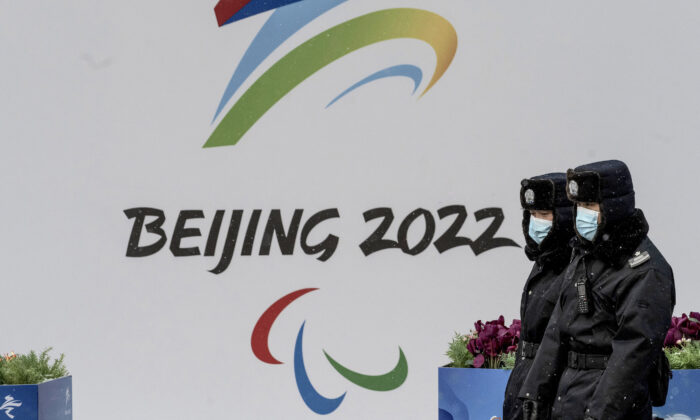 Chinese security guards walk by a billboard for the 2022 Winter Olympics in Beijing on Jan. 20, 2022. (Kevin Frayer/Getty Images)
Viewpoints

Hell, No, We Shouldn’t Go—to the Olympics

Evidently, Team USA has been advised to leave their cellphones at home when they travel to China for the Winter Olympic Games in Beijing.

“That Team USA is telling our athletes to use burner phones and to avoid surveillance by the CCP is no surprise to me,” former Secretary of State Mike Pompeo wrote in an email from his Champion American Values Political Action Committee. “That’s exactly what my team and I did when we traveled to China to protect America’s interests. But you have to ask: [If] our athletes have to use burner phones when visiting a country, then why on earth are we sending them to that country in the first place?”

And while we’re at it, why is NBC (and its owner Comcast) broadcasting an event that’s, in essence, a propaganda exercise for a country practicing various degrees of genocide against Uyghur Muslims, Falun Gong practitioners, Christians, and other religious minorities, not to mention oppressing almost anyone who questions their totalitarian regime?

Oh, and then there’s the little matter of the COVID-19 pandemic that began in their country and about which they’ve been anything but forthcoming, including silence about activities in their Wuhan lab that may have led to a leak.

In other words, our country is sending our premier athletes to an event celebrating a regime that may well have visited a catastrophe on the entire globe, the likes of which hadn’t been seen since World War II.

We can ask, why are our athletes acquiescing in this?

Yes, in many sports, they spend years dreaming of Olympic glory, but other venues, even other global events, exist for most of those sports.

Some things are more important than medals, such as the possibility of a decent, even relatively free, life for the citizens of the most populous country on the planet, for one, and not giving credence to a regime that’s attempting to buy up the nations of the world (including ours, with help from some of our own politicians and corporate executives), for another.

Further, as Pompeo pointed out, our athletes are being put in danger by going.

“When you are in China, you are constantly under the watchful eye of the Chinese Communist Party (CCP), who will monitor and track how you live your life—and punish those who act or speak out against their rule,” he wrote.

I’ve been to China myself and can attest that this is true.

I’ve also been to Taiwan, two years ago with a group observing their open election. Taiwan is a spectacular place, and it’s in part for the preservation of that free country that a boycott of the Beijing Winter Olympic Games is particularly important.

We may be at something of a turning point in history. Russia’s Vladimir Putin is edging further into Ukraine at the same time that Chinese jets are flying ever closer to Taiwan, intruding on its airspace. China and Russia are threatening independent democratic countries at the very moment that the United States has an extraordinarily inept administration in both foreign and domestic policy.

And you can be sure that Putin and Chinese leader Xi Jinping are well aware of that ineptitude.

Arguments go back and forth about the degree to which we should defend Ukraine. It’s a difficult call—I’m among those who are skeptical that we should—because U.S. interest in that Eastern European country isn’t great.

The defense of Taiwan is a wholly different matter. We have a maximum interest in the island state, where a substantial number of our computer chips and other key high-tech commodities are manufactured. If Taiwan goes, China will have us on our knees and more dependent on the communists than we already are.

An Olympic boycott would have shown some resolve. Unfortunately, under the Biden administration, that wasn’t to be.

But we can do our own personal form of boycott. We can bypass watching the Winter Olympic Games in 2022, give NBC their lowest ratings for the event ever, and send a message not just to the Chinese regime, but to the many companies in our country that have become their virtual sycophants.