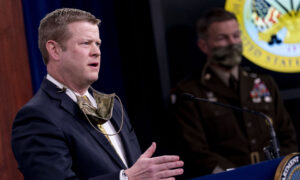 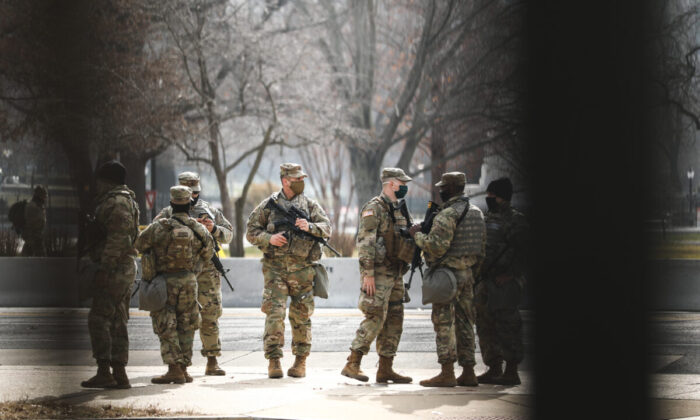 Heavy Military Presence as Capitol Prepares for Inauguration Like No Other

WASHINGTON—The nation’s capital is preparing for a presidential inauguration like no other in U.S. history, marked by extensive security measures, a large military presence, and pandemic restrictions. President-elect Joe Biden is set to be sworn in on Jan. 20.

Up to 25,000 members of the National Guard coming from all 50 states will be stationed at the Capitol. The number of Guardsmen sent to Washington far exceeds the number of U.S. forces in Afghanistan, which has been reduced to 2,500. National Guardsmen have been permitted to use lethal force in order to support law enforcement in the Capitol and city.

The capital was reminiscent of an abandoned ghost town in the days leading up to the inauguration as roads were barricaded, stores were boarded up, and military troops were seen checking the IDs of people at security checkpoints. Military vehicles were seen throughout the area while most residents appear to be staying indoors, aside from the occasional jogger. The Capitol building itself was entirely surrounded by high fencing with barbed wire.

Authorities are worried that the violence and unrest during the Jan. 6 Capitol breach could be repeated again. While most national security and military experts told The Epoch Times the operations are well-conducted and necessary, some say it’s a little excessive.

“The military presence in Washington is unprecedented and, while well-planned as a logistical feat, it’s over the top,” J. Michael Waller, a senior analyst for strategy at the Center for Security Policy, told The Epoch Times.

“It never would have been necessary had the leadership in both houses of Congress paid attention to their own security, and had the mayor of Washington, D.C., accepted the Trump administration’s offers of help before the Jan. 6 attack on the Capitol.”

Waller, a former instructor with the Naval Postgraduate School and an instructor and lecturer at the John F. Kennedy Special Warfare Center and School, described the huge military presence as a “psychological show of force to deter and intimidate.”

He said it was to compensate for “poor intelligence” but also noted that the city is well-prepared for crowd control or riot control.

“I talked to many of the soldiers on duty, and they tell me that the threat level is very low—they are not even carrying ammunition in their weapons,” Waller said. “The whole operation is overkill and sends a dangerous precedent that could normalize a huge military force that our Founding Fathers warned against.”

Washington Mayor Muriel Bowser said on Jan. 15 that even after the presidential inauguration, the city will have to maintain heightened security. When asked if the extensive security measures around the city would be reversed after the inauguration, Bowser said, “We are going to go back to a new normal.”

The presidential inauguration was also declared a National Special Security Event. On Jan. 12, Acting Secretary Pete Gaynor expanded this period to begin on Jan. 13—a week ahead of the Jan. 20 inauguration.

“The military and national security cultures are good at overreacting,” a retired senior military officer told The Epoch Times.

“Additional security in light of Jan. 6 is necessary, however 20,000 armed National Guard members seems a bit over the top.”

“There is an element of both overreaction and a more nefarious exploitation of a crisis. At this point in time—what is the threat? Are hundreds of thousands of Trump supporters going to show up? I don’t think so,” the officer said.

There have been other times in U.S. history when the military has been sent to Washington. Some experts say the heavy security measures and presence of troops in the city are necessary.

“I view the current security preparations prudent and warranted,” Robert J. Bunker, director of research and analysis at C/O Futures, LLC and an international security and counterterrorism professional, told The Epoch Times.

“During times of national unrest threatening Washington, D.C., the military has been deployed in a similar manner, such as during the Civil War and to quell the Bonus Army in mid-1932,” he said.

“The huge National Guard presence is fully justifiable within the context of the Biden inauguration and the further potential for violence that exists,” Bunker said, referring to the Jan. 6 breach. “A peaceful transition of power must be assured.”

It’s hard to travel around in the city or to even get to the Capitol. The Metro announced it would close 13 stations inside the security perimeter. And the National Mall stated it would implement a temporary public closure beginning at 11 a.m. on Jan. 15 through at least Jan. 21, at the request of and in cooperation with the U.S. Secret Service.

Now: Here is what the Capitol looks like in DC

Buses, streetcars, and other forms of public transportation, even bicycles, have been shut down.

Ryan Mauro, the Clarion Project’s national security analyst and Shillman fellow and director of Clarion Intelligence Network, also believes the military presence is justified, based on the extremist chatter being monitored.

“We’re in a new threat environment, which I’ve dubbed the ‘War of the Extremes,’ where political demonization and hysteria is fueling violent extremism on all sides,” Mauro told The Epoch Times.

“And all of these extremist ideologies view Inauguration Day as a climax of the conflict they think we are in, and they hope to turn into a civil war and nationwide insurrection.”

Biden is set to be sworn in on the steps of the Capitol building. But the traditional parade down Pennsylvania Avenue, which normally draws hundreds of thousands of Americans, has been canceled, to be replaced by a virtual parade. Inaugural balls have been canceled as well.

The viewing stand near the White House has been dismantled, making this event likely the smallest inauguration in history, in terms of physical attendance.

President Donald Trump said earlier that he wouldn’t attend the swearing-in ceremony of Biden, breaking a longstanding tradition. He made the announcement the day after Congress certified Biden as the winner of the 2020 election.

The unprecedented security measures add weight to the event and what Biden will say to the nation, which in some ways raises the stakes for Biden, said political communication expert Mitchell S. McKinney, director of the Political Communication Institute at the University of Missouri.

He pointed out that Biden during his campaign focused on a theme of unity, in which he expressed a willingness to work with the other side, a theme other Democratic candidates didn’t touch upon at the time.

“I fully expect him to draw on that theme of unity,” McKinney told The Epoch Times. “He may harken back to some of the times in our nation’s history where we had similar division. Abraham Lincoln’s 1861 inaugural address, for example, where we were on the verge of the civil war.”

“We also again are in similar times in terms of the division, the animosity in our nation,” he said. “It now falls to Joe Biden to try to transcend and try to unite.”

Trump won’t escort Biden in a motorcade to the Capitol, another break from tradition. However, it’s not the first time a president has refused to attend the inauguration of his successor.

The country that year was very divided, and in some ways similar to 2021. Jefferson’s supporters characterized his opponent, Adams, as a lover of monarchy, while Adams’s supporters pictured Jefferson as a radical. Some say Adams didn’t attend Jefferson’s inauguration to prevent violence at the event.

John Quincy Adams, the sixth U.S. president, left Washington a day before the inauguration of his successor, declining to attend Andrew Jackson’s ceremony in 1829.

The Epoch Times spoke to a handful of Washington residents who were walking near the Capitol area. They all called what they were seeing in their city unprecedented. Most said they felt safer under the security measures.

One longtime Washington resident and military veteran who asked not to be named called the scenes “really disturbing,” though he believes the security isn’t excessive, pointing to the Jan. 6 breach.

“It’s like a cross between a zombie movie and a disaster movie,” he told The Epoch Times. “I haven’t ever seen anything like this in this country.”

The veteran said the presence of the National Guardsmen “is sending a message, a show of force, a deterrence.” He described the mood in Washington as “tense” over the past few days.

Brooke Bamar, a Washington resident who lives downtown, said she believes the military preparation is “proper” and that she feels more secure, despite it impacting the daily lives of many.

“People are trying to adapt to the situation, we know that this is temporary,” Bamar told The Epoch Times. “It’s hard, people are having a hard time going to work and grocery shopping, but I think everyone has to sacrifice, and we are doing what we have to do.”

One resident who lives in an apartment where the Capitol building is visible said she’s not going to come out to watch the inauguration parade. Instead, she’ll stay in her apartment and watch the events on television.

Tomoko Makino, a longtime Washington resident, told The Epoch Times: “I have been living here for almost 15 years and I saw Obama’s inauguration and Trump’s. I have never seen anything like this.”

Emel Akan and Janita Kan contributed to this report.