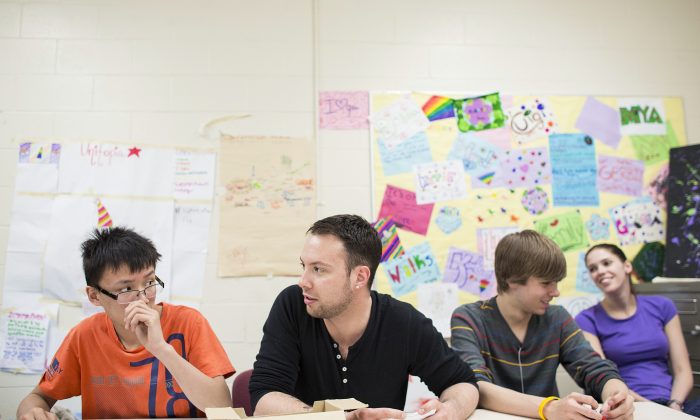 Healthy Sexuality Is for Boys, Too

Five years ago the Calgary Sexual Health Centre noticed a strange phenomenon in its statistics.

Teen pregnancies had dropped, but sexually transmitted diseases were on the rise. Also increasing were domestic and sexual violence rates, bullying, and the spread of disturbing cultural messages about masculinity in the media and society.

CSHC staff also knew that most sexual health services in existence were targeted toward women. That’s when the light bulb came on—boys were being left out of the conversation.

Enter the WiseGuyz program, launched by the CSHC to educate junior high boys on sexual health, positive relationships, gender issues, and human rights. It is the first of its kind in Canada.

Our hope is that the boys will become agents of social change.
— WiseGuyz creator Blake Spence

“There is a gap in programming generally for young men when it comes to healthy relationships, sexual health, talking about emotions, vulnerability, any of that stuff,” says WiseGuyz creator and program facilitator Blake Spence.

“We saw that as a gap in our community, so we thought that we would offer some sort of programming for boys, and it’s turned out that the boys are quite happy to have it and it’s caught on.”

Spence goes into Calgary schools every day from October to May and works with groups of 14- and 15-year-old grade nine boys for two-hour sessions—discussing everything from reproductive anatomy and sexually transmitted infections to media representations of masculinity.

“A lot of them are just really interested in getting accurate information and wanting a safe place to ask questions that they maybe wouldn’t feel comfortable asking other places,” says Spence, adding that the program is designed so that “heavier” topics are only discussed after a level of rapport and familiarity is built between instructors and the group.

According to the CSHC, educating boys about healthy sexuality and relationships addresses risky sexual activity and reduces the incidence of violence later in life.

In the wake of high-profile tragedies such as the Rehtaeh Parsons and Amanda Todd suicides, and the recent scandal with dentistry students at Dalhousie University, WiseGuyz is asking young men to be a proactive part of the solution. Talking in depth about rape culture, consent, and current issues such as the Jian Ghomeshi and Bill Cosby sexual assault allegations are all built into the program.

“Our hope is that the boys will become agents of social change,” says Spence. “That they just become a little bit more aware of themselves, of their own values and beliefs, and respect others for their values and beliefs.”

So far it seems to be working. At the beginning and end of the program the boys complete surveys and participate in focus groups to see how their knowledge and attitudes have changed; sometimes the change is dramatic, says Spence.

“At the end of the year and we see positive movement—every year there are a few boys that really connect with the work, and they take on a leadership role within the group and they start to take part in more conversations, and they start to challenge their peers,” he says, adding that demand for the program is overwhelming and he is looking for ways to expand its reach.

“It gives me a lot of hope for the future generations.”

It’s also something Spence wishes he had access to when he was growing up.

“I never got the opportunity to learn a lot of important stuff when I was a young man, and I would have really liked to have that opportunity, and for me to give that to someone of this new generation is pretty rewarding,” he says.