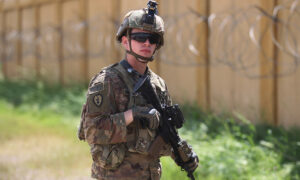 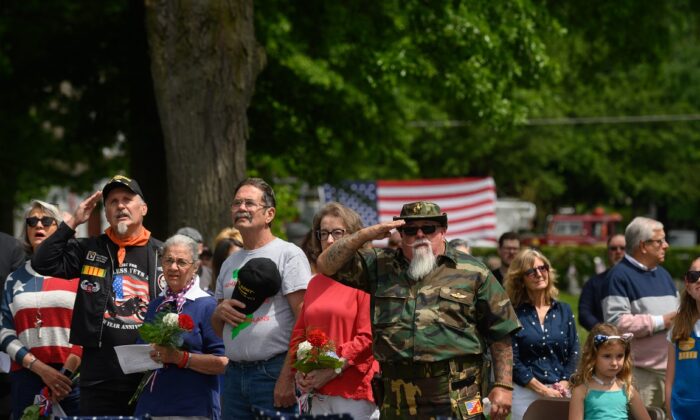 Veterans salute during the singing of the National Anthem in the Oakmont-Verona Cemetery during a memorial service at the 2021 Oakmont-Verona Memorial Day Parade in Oakmont, Penn. on May 31, 2021. (Jeff Swensen/Getty Images)
National Security

A new study projects that cumulative health care costs for U.S. military veterans will reach as much as $2.5 trillion by 2050—a figure that nearly doubles previous forecasts—raising concern about whether the government will take care of its war vets in the coming decades.

According to research from Brown University’s Costs of War Project, the total costs of caring for post-9/11 war veterans will reach $2.2 trillion to $2.5 trillion from 2001 to 2050. This includes the amount already paid in medical care and benefits, as well as the projected future costs already “baked” into the system, the Aug. 18 report shows.

The study notes that federal expenditures for veteran care have doubled over the past two decades, to 4.9 percent of the U.S. budget in 2020 from 2.4 percent in 2001—even as the total number of living war vets declined to 18.5 million from 25.3 million during that time.

Harvard University professor Linda Bilmes, who authored the study, pointed to several factors that led to the skyrocketing costs.

“Veterans of these conflicts have had access to a broader range of government benefits, improved systems for submitting and appealing disability and healthcare claims, and expanded post-military transition services such as re-entry and employment training.

“Long after the post-9/11 wars end, the largest single long-term cost of these wars will be benefits and medical care for the men and women who served in Afghanistan, Iraq, and related theatres since 2001, and their dependents.”

The Costs of War Project released similar cost projections in 2011 and 2013. Bilmes said her forecast nearly doubles the estimates of the earlier research, attributing this increase to higher-than-expected disabilities and expenditures.

Citing Bureau of Labor Statistics (BLS) data, Bilmes said that more than 40 percent of those who have served in the post-9/11 era have already been certified as having a “service-connected disability,” compared to fewer than 25 percent of veterans from World War II, Korea, Vietnam, and the first Gulf War.

Bilmes also said that more than 20 percent of all post-9/11 era veterans have serious disabilities, compared with fewer than 10 percent of veterans from previous U.S. wars.

The Harvard researcher noted that the post-9/11 veterans have an outsized impact on the health care system, while making up less than a quarter of total living U.S. vets.

“Although this cohort makes up only 24 percent of all living veterans, it accounts for more than half of the severely disabled veteran population in America,” she said. “Over 1 million post-9/11 veterans have significant disabilities.”

Annual health care costs will continue to skyrocket in the coming decades, as the cohort of post-9/11 war vets ages and increases in size, the paper said, pointing to the more than 40 percent of veterans that have already been approved for lifetime disability benefits.

Bilmes raised concerns that the U.S. government could default on its obligations to its veterans. Even though the Department of Veterans Affairs (VA) budgets for disability benefits to increase as claims rise over time, “there are always political pressures to cut unfunded entitlements,” she said.

And while cutting veterans’ benefits may seem unconscionable to voters today, the political landscape could look much different in 2050, Bilmes warned. The number of American men who are veterans has halved to one in eight in 2021 from one in four in 2001, and will further decline to one in 14 men by 2040, according to her research.

“By 2050, when the costs of providing medical care and benefits for veterans of the post-9/11 wars reach their peak, few Americans alive will have direct relatives who were involved in these conflicts,” Bilmes said.

Bilmes suggested that veterans should work to guarantee their benefits now, while they still have relatively more political power.

“Postponing this discussion may eventually put veterans’ funding in competition with all the other future claims on federal tax dollars—including paying back the trillions of dollars of debt we incurred to finance the wars in the first place,” Blimes said.

The research paper concluded by recommending a Veterans Trust Fund, which would earmark funds for disability benefits and create awareness of the magnitude of the problem.

“A Veterans Trust Fund would only begin the process of setting aside money for the long-term costs of war, but it would establish the right framework,” Bilmes said. “It would also begin to introduce better financial management into the system.”

The research from the Costs of War Project follows a June 21 report finding that U.S. veterans are committing suicide at record rates. The combined analysis suggests that even though health care costs are skyrocketing, war vets still aren’t having their needs met.

According to the June report, the VA has failed to spend “millions” of dollars set aside for suicide prevention outreach.

“Worse, 31 percent of ‘denied or rejected non-VA emergency care claims were inappropriately processed’ in 2017, meaning veterans had to take on the financial burden of health care for an incredible sum of $716 million,” the June report reads, citing internal VA audits.

“Unless the U.S. government and U.S. society make significant changes in the ways we manage the mental health crisis among our service members and veterans, suicide rates will continue to climb.”