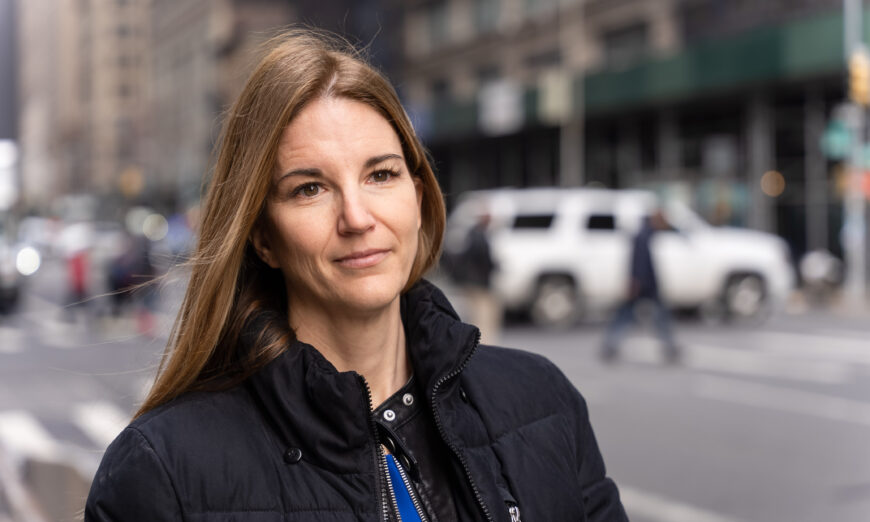 People injured by COVID-19 vaccines are in great need of support from family and friends, the head of a nonprofit that aims to provide that support says.

“I don’t think people realize that, if you’re not supporting someone that you know that’s injured, most likely nobody else is either,” Brianne Dressen, head of React19, told EpochTV’s “American Thought Leaders.”

People who experienced adverse events after vaccination have largely found that medical professionals—especially early in the mass vaccination campaign—refuse to acknowledge the vaccines cause problems, compounding their difficulties. U.S. authorities have also consistently downplayed side effects, and have only worked behind the scenes to try to guide medical care for the vaccine-injured rather than roll out public guidance for healthcare workers to follow.

Read More
Brianne Dressen: Gaslit by Doctors and Loved Ones, Some Vaccine-Injured Are Making the Ultimate Choice to End Their Suffering

Dressen herself suffered an adverse reaction after receiving AstraZeneca’s COVID-19 vaccine in a clinical trial. She was told for months by various doctors that her condition was linked to anxiety, but a psychiatrist said that was not true. The U.S. National Institutes of Health eventually agreed to treat her, after diagnosing her with a vaccine injury.

While the full extent of vaccine injuries is not known, Dressen estimates that many Americans know somebody who has suffered from one. Simple tasks like checking in with that person to see how they’re doing can make the difference, she said.

React19, a volunteer-run nonprofit, tries to step in by pairing what they call an advocate with each vaccine-injured person, with advocates helping them apply for financial assistance and find doctors to treat symptoms.

“We want to do everything we can to make sure that we can get these people their lives back to stop the progression of their disease, because they have nobody. A lot of these people don’t have families that believe them, they don’t have; we all have friends that don’t believe this,” Dressen said. “Big Tech is definitely against us. And so, hopefully, what we’re able to build through React19 is a refuge for these people. And in turn, these people will be able to find their voice and find physical strength to be able to come out and push and stand with us and be able to share their voices and the injustices that have happened to help us enact change so this doesn’t happen again.”

There have been gut-wrenching moments for Dressen, who is still recovering from her vaccine injury.

In the fall of 2022, a member of React19 flew to Switzerland and killed himself through euthanasia. He sent a suicide note that explained he was suffering from 10 symptoms, including small fiber neuropathy, after receiving a COVID-19 vaccine.

“After 18 months of suffering with extreme nerve damage and other chronic pain, I’m no longer going to continue to deteriorate/suffer or risk winding up in a care home. This has simply caused too much body wide damage for me to continue. I did not want to end my life but needed to end my suffering,” the man wrote in the note, which was reviewed by The Epoch Times.

He said that he “went above and beyond and tried to get medical treatment to no avail” and believed there was “no known cure” for what he described as a “spike-induced illness,” or induced by the spike protein the vaccines introduce into the body.

Dressen sent the note to top U.S. authorities, lamenting the lack of support from the government.

“We KNOW what has happened to us. To spell this out plainly, we KNOW the vaccine caused this. There is zero question what drove this man to his death. Because existing this way, then hidden and abused, without question is worse than death. You refuse to see it, but I see it. I see it in 20,000 Americans every single day,” she said, referring to React19 members. “They have held on for so long, trapped in a nightmare. I can no longer tell them hope and help is coming.”

There have been several dozen suicides among the vaccine-injured, and others are considering taking their own lives, Dressen told The Epoch Times.

A common link among those who committed suicide? Lacking support.

“There’s only two that I know of that were from families that were supportive and watching them. The rest were people that their family members had walked away [from],” Dressen said.

She recounted one woman who had a husband and adult children, all of whom abandoned her.

“And so she went and found a way to do it. That was sanctioned by the Canadian government. And so she went through with it and ended her life,” Dressen said. “And I know that people see that as just a number. But that’s a real human being, that’s someone that deserved better.”

Dressen was tempted to end her life for several months due to the cascade of symptoms she was fighting.

“With a vaccine reaction, it’s not like it’s fleeting. It’s not like it’s a moment in time where you’ve had a couple of bad days, and then it’s over,” Dressen said. “I hadn’t slept for months. I had raging tinnitus. The electrical sensations all over my body, which I still have to this day, every moment of every day. My brain fog was off the charts. I couldn’t eat. You could see every single rib in my body. … I was not in a good place.”

The Utah woman was questioning whether life was still worth living with so much pain and “wanted to be done.” She made a plan and even wrote goodbye letters to her children.

Dressen battled the temptation, though, and ultimately chose against suicide, accepting her life will be hard.

“I overcame that and I learned to accept it,” Dressen said, adding later: “All these weird things are going on. And I can accept that though. It doesn’t mean that I’m okay with it. But it means that I can accept it and go, ‘Yes, this is part of my life. But my kids need XYZ, the injured need ABC.’ And if I’m trapped, and if all I’m doing is being miserable and suffering inside my head, I’m not doing any of them any good. And also, I’m not doing myself any good, because then there goes all my healing energy for myself.”

Dressen later began to speak about what nearly happened because she feels other vaccine-injured need to know they’re not the only ones who have reached a low point.

“I hid that whole process because I was so embarrassed. And so it’s humiliating to think that you’re brought to your knees to the point where you want nothing more than to just be dead, right? Nobody wants to admit that they were that vulnerable and that their life was that bad, right? Because it’s seen as a weakness, but that’s not what it is,” Dressen said.

The crystallizing moment came when a friend committed suicide. Before carrying out the deed, the friend had told Dressen that she was strong.

Robert Fusaro, a member of React19, suffered an allergic reaction to Pfizer’s vaccine, according to a medical record reviewed by The Epoch Times. Fusaro soon needed heart surgery and a pacemaker, and has suffered from a number of other serious symptoms such as heart inflammation.

Fusaro has seen virtually all of his friends drift away over time. Though he has had support from family members, some relatives have had trouble dealing with the chronic illness.

In the vaccine-injured community, some people have gotten better over time. Others have seen their conditions worsen. And there are cases of fluctuations. People are still working to figure out potential solutions to problems that the medical establishment has largely ignored.

Read More
Brianne Dressen: Gaslit by Doctors and Loved Ones, Some Vaccine-Injured Are Making the Ultimate Choice to End Their Suffering

Fusaro said some of his symptoms have improved, and he’s now able to drive for short distances. For him, one of the best treatments has been acupuncture from a medical doctor.

Other symptoms are so bad that Fusaro still thinks about committing suicide. But he holds on because he has hope one day his situation will change.

“I think about suicide, definitely; pretty pretty frequently,” Fusaro told The Epoch Times. “But I won’t do it just out of hope that someday some kind of treatment or cure comes. You just have to hold on to hope because you can’t fix dead. That’s my philosophy. This is what I tell everybody I talk to who talks about suicide. If you live one more day, there’s always a chance, there’s always hope. But once you’re dead, you’re dead. You can’t undo that.”

If you or someone you know is experiencing a crisis or is considering suicide, has mental health issues, or engaging in substance abuse, dial or text the U.S. Suicide & Crisis Lifeline at 988 to speak with a counselor. If you’re in the UK, call the Samaritans at 116123.