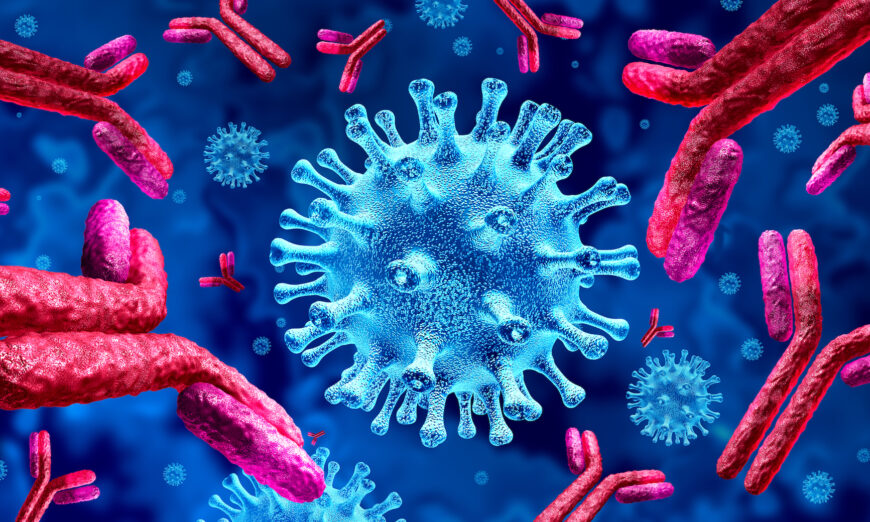 Previous monoclonal antibody treatments against COVID-19 have had mixed results against variants. However, new research uncovered two antibodies that work against all known strains of COVID-19.

Researchers at Tel Aviv University revealed two antibodies that are so effective at neutralizing SARS-CoV-2 — and all of its variants — that they believe the antibodies could serve as an “effective substitute for vaccines.”1 One of the glaring failures surrounding COVID-19 shots is their lack of effectiveness against emerging COVID-19 strains.

By choosing the spike protein on which to base COVID-19 shots, scientists picked a protein that not only was known to be toxic to humans but was not the part of the virus that prompted the best immune response.

Spike protein mutates rapidly, which essentially destroys virtually any protection that the shot provides shortly after it’s given. The end result is a seemingly never-ending series of annual shots and boosters, which can only offer rapidly waning protection. If the Israeli researchers’ findings are verified and the antibodies turn out to be as effective as suspected, it could eliminate COVID-19 booster shots entirely.2

The U.S. Food and Drug Administration (FDA) has authorized multiple monoclonal antibody (mAb) cocktails for the treatment of COVID-19. However, as variants emerged, their effectiveness varied, with some becoming ineffective and others retaining their activity.

“This indicates that some antibodies elicited by infection are more variation-sensitive than others, and that antibody breadth of specificity, and not only potency, should be considered,” the researchers, from the department of clinical microbiology and immunology at Tel Aviv University’s Sackler Faculty of Medicine,3 wrote in the journal Communications Biology.4

For instance, in January 2022, the FDA limited the use of two monoclonal antibody treatments — bamlanivimab and etesevimab, which are administered together, and REGEN-COV (casirivimab and imdevimab) — to patients infected with a variant known to be susceptible to them.5 The two antibody treatments mentioned had lost much of their effectiveness against the omicron variant, leading to the usage restriction in people infected with omicron.

On the other hand, in February 2022, the FDA issued an emergency use authorization (EUA) for a monoclonal antibody treatment known as bebtelovimab, which retained activity against the omicron variant.6 According to the FDA:7

“Bebtelovimab works by binding to the spike protein of the virus that causes COVID-19, similar to other monoclonal antibodies that have been authorized for the treatment of high-risk patients with mild to moderate COVID-19 and shown a benefit in reducing the risk of hospitalization or death.”

The way the antibodies bind to the spike protein may hold the key to their ultimate effectiveness against various strains. In previous research conducted in October 2020, lead study author Natalia Freund and colleagues isolated nine antibodies from people who recovered from the original COVID-19 strain in Israel. Freund stated in a news release:8

“In the previous study, we showed that the various antibodies that are formed in response to infection with the original virus are directed against different sites of the virus. The most effective antibodies were those that bound to the virus’s ‘spike’ protein, in the same place where the spike binds the cellular receptor ACE2.

Of course, we were not the only ones to isolate these antibodies, and the global health system made extensive use of them until the arrival of the different variants of the coronavirus, which in fact rendered most of those antibodies useless.”

The featured study picks up where the October 2020 study left off, revealing two antibodies — TAU-1109 and TAU-2310 — that bind to a different area of the spike protein — one that doesn’t undergo many mutations — making them capable of neutralizing all known strains of COVID-19. According to Freund:9

The antibodies were also tested against pseudoviruses at Bar-Ilan University in the Galilee. “The results were identical and equally encouraging in both tests,” according to a news release.11 What’s interesting is that the mutating virus may have played a part in making the two antibodies so effective. Freund explained:12

“The infectivity of the virus increased with each variant because each time, it changed the amino acid sequence of the part of the spike protein that binds to the ACE2 receptor, thereby increasing its infectivity and at the same time evading the natural antibodies that were created following vaccinations.

In contrast, the antibodies TAU-1109 and TAU-2310 don’t bind to the ACE2 receptor binding site, but to another region of the spike protein – an area of the viral spike that for some reason does not undergo many mutations – and they are therefore effective in neutralizing more viral variants. These findings emerged as we tested all the known COVID strains to date.”

COVID Booster Shots Are Not the Answer

Freund believes that the antibodies are so effective they could ultimately replace COVID-19 booster shots. This is welcome news, as most protection gained from COVID-19 shots, including boosters, doesn’t last.

One study funded by the U.S. Centers for Disease Control and Prevention involved data from 10 states collected from August 26, 2021, to January 22, 2022, periods during which both the delta and omicron variants were circulating.13 Within two months of the second COVID-19 shot, protection against emergency department and urgent care visits related to COVID-19 was at 69%. This dropped to 37% after five months post-shot.

The low effectiveness five months after the initial shot series is what prompted officials to recommend a booster dose — and the third shot “boosted” effectiveness to 87%. This boost was short-lived, however. Within four to five months post-booster, protection against emergency department (ED) and urgent care (UC) visits decreased to 66%, then fell to just 31% after five months or more post-booster.14

Rather than admitting defeat, health officials are planning to hand out even more doses of their embarrassingly ineffective boosters with new so-called “updated” shots. On August 31, 2022, the FDA amended the EUAs of Moderna and Pfizer’s COVID-19 shots to authorize bivalent formulations to be used as booster doses at least two months after a previous booster or primary serious of the shots.

“The bivalent vaccines, which we will also refer to as “updated boosters,” contain two messenger RNA (mRNA) components of SARS-CoV-2 virus, one of the original strain of SARS-CoV-2 and the other one in common between the BA.4 and BA.5 lineages of the omicron variant of SARS-CoV-2,” the FDA stated.15

In addition to the strong possibility that protection against COVID-19 will once again rapidly disappear following the booster, there’s a real risk of serious adverse events from repeatedly artificially inflating antibodies in your body via repeated booster shots.

This tricks your body into thinking it’s always infected with COVID-19, a condition that can only lead to a “death zone,” accelerating the development of autoimmune conditions such as Parkinson’s, Kawasaki disease and multiple sclerosis, according to tech leader and COVID analyst Marc Girardot, who urged a retreat from the COVID shot “death zone” before it’s too late.16

With Antibody Treatment ‘We Will Not Have to’ Use ‘Boosters’

There may be a light at the end of the tunnel, as Freund is confident the “cross-neutralizing capabilities of antibodies naturally elicited during wild type SARS-CoV-2 infection” may end up providing an alternative to booster shots. She stated:17

“For reasons we still don’t yet fully understand, the level of antibodies against COVID-19 declines significantly after three months, which is why we see people getting infected again and again, even after being vaccinated three times.

In our view, targeted treatment with antibodies and their delivery to the body in high concentrations can serve as an effective substitute for repeated boosters, especially for at-risk populations and those with weakened immune systems.

COVID-19 infection can cause serious illness, and we know that providing antibodies in the first days following infection can stop the spread of the virus. It is therefore possible that by using effective antibody treatment, we will not have to provide booster doses to the entire population every time there is a new variant.”

This is encouraging, though not exactly surprising considering what’s known about natural immunity — the type earned by recovering from infection. A 2022 study published in the New England Journal of Medicine (NEJM)18 is just one example of research showing natural COVID-19 immunity is not only effective but lasts longer than the immunity that’s acquired from COVID-19 shots.19

What’s more, prior COVID-19 infection — i.e., natural immunity — offered better protection against symptomatic omicron infection more than one year later than three doses of COVID-19 shots did after one month.

Another one of the most talked-about reports showing the superiority of natural immunity involved data presented July 17, 2021, to the Israeli Health Ministry, which revealed that, of more than 7,700 COVID-19 cases reported, only 72 occurred in people who had previously had COVID-19 — a rate of less than 1%. In contrast, more than 3,000 cases — or approximately 40% — occurred in people who had received a COVID-19 shot.21

In other words, those who were vaccinated were nearly 700% more likely to develop COVID-19 than those who had natural immunity from a prior infection.22

Why is there a good chance you haven’t heard about this news? Repeated booster shots equate to ongoing dollar signs for Big Pharma and the health agencies and officials it controls. So it remains to be seen whether an antibody treatment that targets every COVID-19 variant effectively will ever see the light of day in hospitals and outpatient clinics.