‘A Reappraisal is Long Overdue’: Mainstream Scientists, Doctors, Parents Speak Out About Harms of COVID-19 Vaccines 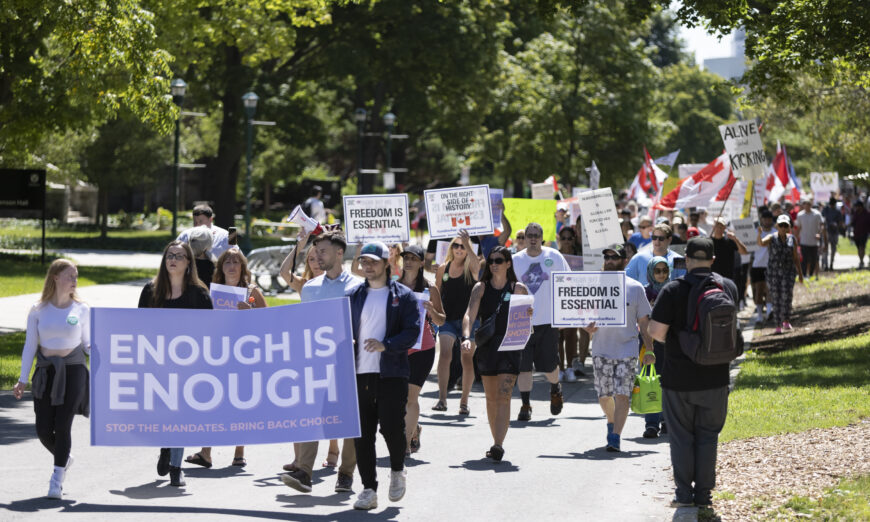 A group of Western University students hold a protest against the school's COVID-19 vaccine mandate on Aug. 27, 2022. The London, Ontario, university announced on Aug. 22 that anyone on campus in the fall must have at least three COVID-19 shots and wear masks in classrooms. (The Canadian Press/Nicole Osborne)

Just one day after she got a COVID-19 booster shot, Regan Lewis, a 20-year-old nursing student at Colby Community College in Colby, Kansas, had a heart attack.

Her mom, Connie Werth Lewis, desperately asked for prayers for her daughter in a public post on Facebook.

“I can’t say for sure that there is a link, but our beautiful 20 year old healthy daughter … had a [COVID-19 injection] yesterday so she could participate in her clinicals,” Werth Lewis wrote. “Today, she went into cardiac arrest and has been flown to Kearney. She is on a ventilator and is fighting for her life. PLEASE PLEASE PRAY FOR HER!”

As of Oct. 7, 31,470 deaths have been reported to the Centers for Disease Control and Prevention and Food and Drug Administration via their Vaccine Adverse Events Reporting System, a passive post-market surveillance system designed to help government officials and researchers pick up safety signals about vaccines.

According to the Agency for Healthcare Research and Quality, “adverse events from vaccines are common but underreported, with less than 1 percent reported to the Food and Drug Administration.”

Other peer-reviewed scientific articles, including a 2012 study published in the journal Human and Experimental Toxicology, have similarly shown that only a fraction of adverse events following vaccines are reported to the government.

In addition, recent research, published by an international team of scientists last month in the journal Vaccine, found that the Pfizer and Moderna mRNA COVID-19 vaccines were associated with a much higher excess risk of serious adverse events compared to baselines established by placebos.

At a conference for front-line doctors who have been treating COVID-19, held in Sedona, Arizona, Peter McCullough, a cardiologist, immunologist, and scientific researcher, said that deaths and other adverse outcomes following vaccines have been “grossly underreported.”

It appears that there has been a rise in excess deaths in industrialized countries around the world. For example, the Australian government has released provisional mortality statistics that show a dramatic rise in excess deaths. In June, in Australia, a country of only 26 million people (making it smaller than the population of the entire state of Texas), there were 2,410 deaths above the historic average. The top three causes of excess death in Australia were attributed to cancer, dementia, and non-COVID respiratory diseases, including influenza and pneumonia.

In the United States, insurance companies, including Lincoln Financial Group, have reported dramatic increases in payouts for non-COVID-related deaths in the first quarter of 2022. The uptick began to be seen clearly the year before.

On Dec. 30, 2021, Scott Davison, chief executive of OneAmerica, a major insurance company based in Indianapolis, said in an online news conference that his company was seeing “the highest death rates [they] have seen in the history of [the] business.”

Davison said that death rates had climbed 40 percent and that COVID-19 fatalities “greatly understate” the actual deaths from working-age people hit by the pandemic, as most of the claims being filed weren’t being classified as COVID-19 deaths.

“It may not all be COVID on their death certificate, but deaths are up just huge, huge numbers,” he said.

Brian Tabor, president of the Indiana Hospital Association, said in the same news conference that hospitals across Indiana were being flooded with patients “with many different conditions.”

At the recent Sedona conference (where Jennifer Margulis also was a speaker) several physicians pointed out that there has been a growing number of “unexplained” sudden deaths among young people who have received COVID-19 injections as well as booster shots.

That point was made by several of the speakers, including Dr. Sherri Tenpenny, a physician based in Cleveland; and Dr. Jeffrey Barke, a medical doctor in private practice in California. These untimely, age-inappropriate deaths, they pointed out, often were the immediate result of heart dysfunction, blood clots, or seizures. But, they said, where there was a history of prior COVID-19 injection, the health condition that ostensibly led to death may actually have been caused by the shots.

McCullough cited the case of U.S. Rep. Sean Casten’s (D-Ill.) teenage daughter. Casten wrote in a statement that his 17-year-old daughter, Gwen, died in her sleep in June.

Casten’s statement says that his daughter was “a healthy 2022 teenager” who “ate well, exercised, got regular check-ups, [and] didn’t suffer from any behavioral health issues.” She was also “fully vaccinated, and quarantined after occasional positive, asymptomatic COVID tests during the omicron wave.”

According to the statement, the family was “left grasping at the wrong end of random chance” following Gwen Casten’s sudden death.

But McCullough and other experts argue that random chance may have had an accomplice.

“As with any other new medical product, the burden of proof must be on the vaccine,” McCullough said.

A Formerly Pro-Vaccine Cardiologist Speaks Out

“Vaccines are the safest of ALL drugs,” he wrote in a tweet in late November 2020. “Far safer than any other drug people are taking on a regular [basis],” the tweet continues. “The vaccine safety concerns are totally disproportionate to reality.”

In February 2021, he even appeared on “Good Morning Britain” to defend COVID-19 vaccine safety. He told the host then that there was “clearly irrational reasoning behind why people don’t want to take the vaccine, which is based on very blatant false information.”

However, when his father died suddenly of cardiac arrest just five months after that television appearance, Malhotra started researching the safety and efficacy of these vaccines in more depth. When he dove into the medical research and spoke with medical colleagues, scientific researchers, and investigative health journalists, he became increasingly disturbed by what he uncovered.

Based on his scientific research and clinical experience, Malhotra says he no longer recommends the COVID-19 vaccines.

Moreover, he now insists that there’s strong scientific, ethical, and moral evidence that the current COVID-19 vaccine administration must stop and that the raw data submitted to approve the vaccines must be subjected to fully independent scrutiny.

Not Safe or Effective

When Malhotra was interviewed for the newly released documentary film “Safe and Effective: A Second Opinion,” he reiterated that he has “reluctantly concluded that this vaccine is not completely safe and has unprecedented harms.”

Malhotra also has shared this view in a new peer-reviewed article in the Journal of Insulin Resistance. The study, titled “Curing the Pandemic of Misinformation on COVID-19 mRNA Vaccines Through Real Evidence-Based Medicine—Part 1,” shows that the risk of serious adverse events from the vaccines is greater than the risk of being hospitalized from COVID-19.

The real-world safety data, coupled with an understanding of the plausible mechanisms of harm, “are deeply concerning, especially in relation to cardiovascular safety,” the study found.

“It cannot be said that the consent to receive these agents was fully informed, as is required ethically and legally,” the study concluded. “A pause and reappraisal of global vaccination policies for COVID-19 is long overdue.”

In part 2 of Malhotra’s study, published in the same journal, he concluded that, “There is a strong scientific, ethical, and moral case to be made that the current COVID vaccine administration must stop until all the raw data [have] been subjected to fully independent scrutiny.”

According to Malhotra, not only do we need to halt the current program, we need to make sure that profits don’t take precedence over people’s health in the future.

“Looking to the future, the medical and public health professions must recognize these failings and eschew the tainted dollar of the medical-industrial complex,” he said. “It will take a lot of time and effort to rebuild trust in these institutions, but the health—of both humanity and the medical profession—depends on it.”