Safety First, Except When It Comes To Vaccines: New Documentary

'Safe and Effective: A Second Opinion,' gives a compelling summary of the misinformation, censorship and heart-wrenching consequences of the COVID-19 vaccines
COVID-19 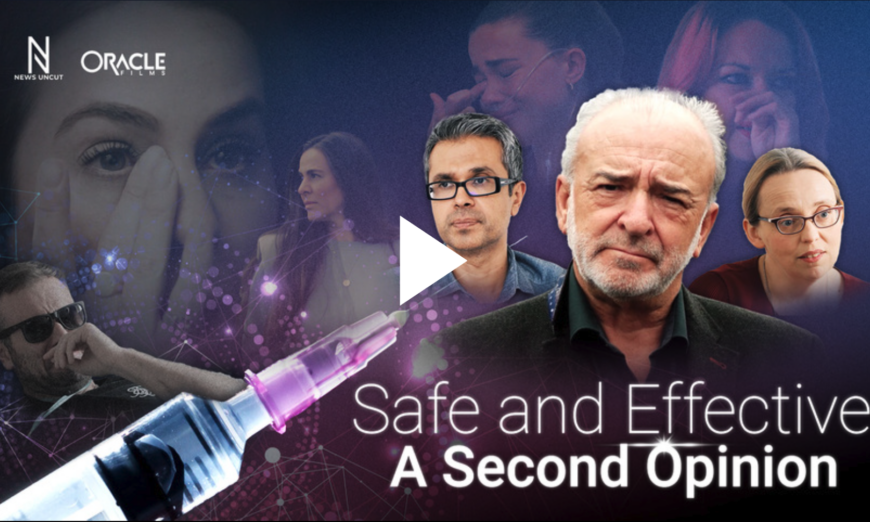 "Safe and Effective: A Second Opinion" contrasts the official statements of medical authorities in the United Kingdom with emerging research that is bringing the logic and ongoing impacts of lockdowns, school closures, mask-wearing, PCR tests, and other non-pharmaceutical interventions into question.

“Your safety will always come first. And a COVID-19 vaccine will only be approved by us, the U.K.’s Medicines and Healthcare Products Regulatory Agency, once it has met robust standards on safety, quality, and effectiveness.”

So begins the new British documentary, “Safe and Effective: A Second Opinion.” These words immediately cue viewers that what they are about to see will contradict the reassuring statement delivered by Dame June M. Raine, chief executive of the United Kingdom’s Medicines and Healthcare Products Regulatory Agency (MHRA). And conflict it does.

Produced by Mark Sharman and directed by Philip Wiseman, available on EpochTV now, “Safe and Effective” is the latest in a recent spate of books and documentaries focusing on vaccine safety. These include the Danish documentary film, “Under the Skin: What Does Aluminum Do in Vaccines,” about adverse effects of the HPV vaccine Gardasil (now available exclusively on Epoch TV), and the English translation of “Turtles All the Way Down: Vaccine Science and Myth,” a book which explores the safety science underlying the childhood vaccine schedule.

Dense and disturbing, the film is narrated by John Bowe, an actor with white hair, a soothing voice, a serious face, and a sense of gravitas. Bowe is also the founder of C.O.V.I.D., which stands for Charity Organisation for the Vaccine InjureD. His non-profit seeks to help people who have been injured by COVID-19 vaccinations.

Bowe speaks for the vaccine injured when he tells us they, “feel unrecognized and abandoned by the NHS (National Health Service) and the government they trusted.”

One of the film’s primary goals is to provide a platform to allow the vaccine-injured to tell their stories. Even though the film is only 55 minutes long, we are introduced to no fewer than eight people severely injured by either the Pfizer or AstraZeneca vaccines.

While COVID-19’s victims consist primarily of senior citizens and those with comorbidities, the COVID-19 vaccines’ victims are frequently young and healthy. The tragedy of this is visible: Most of the vaccine-injured profiled in the documentary were at very little risk from the illness in the first place.

Like Georgia Segal, 35, who collapsed after her second dose of the Pfizer shot. The vaccine caused some kind of neurological damage that made her body seize and took away her ability to walk. Segal has video footage from when suffering was at its worst.

Then there’s Alex Mitchell, a rugged 57-year-old Scotsman from Glasgow. Mitchell suffered blood clots following a dose of AstraZeneca’s vaccine. His wife and children were told there was no hope.

However, although the blood clots destroyed his left leg, requiring amputation, he survived.

His doctors told him the clots were so bad they should have been fatal. Mitchell is hoping with the use of his new prosthetic leg that he can regain some of his old life. Mitchell was compensated the maximum amount for a COVID-19 vaccine injury in the UK, £120,000, currently the equivalent of approximately $137,000.

Stephen Wright, 32, was not so lucky. About to start a new job as a senior clinical psychologist when he received the AstraZeneca vaccine, Wright was excited to get this British product. But after the jab, he suffered a stroke. The night he died, he was helping his wife, Charlotte, put their children to bed. Charlotte had to use the local food bank for months to feed herself and her children.

Eventually, Charlotte Wright, too, received the £120,000 maximum compensation for the loss of her husband. The government compensation, Wright said, is some vindication but is not enough and will never be enough.

Caroline Pover, a 50-year-old dynamo with long pink and green hair, has not been lucky either. Pover, who has a pickling business, writes books, and is a public speaker, got the vaccine in order to make her annual trip to Japan.

“My life is completely changed now,” Pover said in the film. “It’s unrecognizable compared to how it was.”

After taking the AstraZeneca vaccine, Pover spent five months in bed. She was exhausted, in relentless pain, and debilitated by brain fog.

She said she was unable to work more than two hours at a time without incapacitating chest pain. “I didn’t want to live when it was at its worst,” Pover admitted. “I just couldn’t see the point.”

For many people featured in the film, their injuries have been so severe that they’ve struggled to believe their lives will ever be worth living again. Unfortunately, their medical doctors have made it worse.

“The doctors don’t know what to do with us,” Pover said. Instead of sympathy and a treatment protocol, conventional doctors often dismiss these patients’ COVID-19 vaccine injuries. Some even accuse patients of being mentally ill.

While all the stories are moving, John Watt’s is perhaps the most deeply affecting. We see videos of Watt working out in the gym before receiving the vaccine. He’s tattooed and muscled, clearly very fit.

Then we see him lying in bed, his eyes covered by sunglasses, slurring his speech, his mother so choked up by his ordeal that she’s barely able to speak.

Watt has postural orthostatic tachycardia syndrome, also known as POTS. He can hardly stand without sending his heart into fits.

This big, strong weightlifter tried to suppress sobs as he said, “This is my life now,” indicating his legs stretched on the bed in front of him, propped on a pillow. “Stuck in my bed every day with no help from anybody.”

He lifts his sunglasses to wipe away tears before continuing. “I can’t live like this. I can’t live my life in bed. I’m only 36 years of age. I’m supposed to get married this year.” A picture of John and his fiancée before John’s illness appears, the two of them looking blissfully happy and healthy.

Malhotra was among the first to be double vaccinated (with the Pfizer mRNA vaccine). However, he said, after doing months of data analysis on both the vaccines and the illness, speaking to medical scientists from Oxford, Stanford, and Harvard, two investigative journalists, and two whistleblowers from Pfizer, he has concluded “reluctantly” that the vaccine is “not completely safe and has unprecedented harms.” He called for an immediate halt to vaccination until the data can be properly analyzed.

Latypova reviewed the data Pfizer was forced to release as a result of litigation. She said Pfizer skipped important steps in safety testing. For instance, the toxicity of the COVID-19 vaccine’s mRNA active ingredient, the spike protein, was never studied.

Malhotra believes that the spike protein itself is likely the mechanism through which the vaccines cause harm.

The FDA and Pfizer knew there were toxicity issues with gene therapy medicines as well, the film contends. The CDC, FDA, and Pfizer lied when they insisted the vaccine stayed near the injection site.

Indeed, as Malhotra explained, the spike protein “appears to be distributed throughout the body, in every major organ system, for several months, causing a direct reaction—through toxicity—or an autoimmune reaction.”

The film effectively contrasts the heart-wrenching stories of injury with official statements, advertisements, and even celebrity endorsements. Republican ex-President George W. Bush teamed up with Democratic ex-Presidents Bill Clinton, and Barack Obama to propagandize the public with the idea that the vaccines were completely safe and that only reckless and irresponsible people would not rush out and get one the moment they were eligible.

“Don’t miss out on the good times,” proclaimed one especially cheery ad.

The film goes on to detail conflicts of interest that pervade the regulatory agencies, the deceptive way relative risk reduction is used to coerce vaccination, the collusion between government and tech giants to crack down on so-called misinformation, the doubling of Pfizer’s revenue from 2020 to $81 billion in 2021, and the increasingly hostile messaging as many people refused to line up for the vaccines.

“No Jab, No Job,” read a Daily Mail headline. Prime Minister Boris Johnson referred to “anti-vaxxers”—already a slur—as “nutjobs,” and Tony Blair went so far as to say, “Frankly, if you’re not vaccinated at the moment . . . you’re not just irresponsible, I mean you’re an idiot.”

A Time of Reckoning

The mainstream media, in collusion with Big Tech and Big Government, has successfully presented a cartoonishly simple “safe and effective” picture for a long time. But not anymore.

This film, along with myriad lawsuits, new research that shows no benefit of COVID-19 boosters for young people, and calls for public health to be held to higher standards of accountability and ethics, suggest a reckoning is coming soon.

Maxwell Harrison, 22, was a talented ballroom dancer who thought he would die after the Pfizer vaccine caused so much damage to his heart. Genevieve Florence, 24, was an actress, synchronized swimmer, and cliff-jumper. She felt her life was over because she has not been able to do even the simplest things for herself. Millions of COVID vaccine injuries and deaths are being reported through official channels across the world, as John Bowe pointed out at the beginning of the film.

“It’s a scandal of such epic proportions [that] I think people don’t know where to begin with it,” said Dr. Clare Craig. Watching this film is a good place to start. We hope “Safe and Effective” will help public health look at itself in the mirror and finally admit these vaccines were a colossal mistake.