Get Prepared With Shelf-Stable Foods 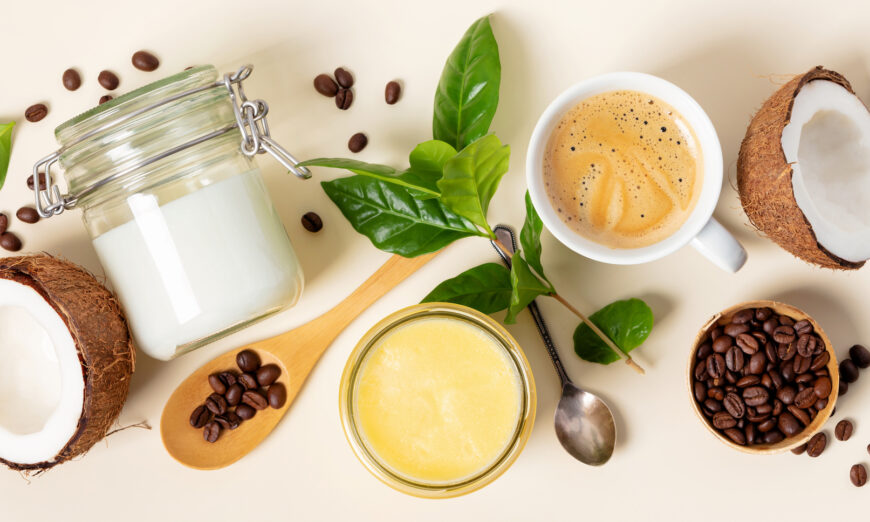 Ghee and coconut oil are ideal for cooking and remain stable even without refrigeration.(By Natalia Klenova/Shutterstock)
Food items and commodities are up by 30%, and they’re predicting food shortages will become a long-term thing starting this fall. Don’t panic – just take these steps to begin preparing now, before it’s too late.

It appears we’re in a phase where global systems of food and energy production are being intentionally dismantled in an effort to force into effect what the World Economic Forum (WEF) calls The Great Reset1 and the Rockefeller Foundation calls Reset the Table.

According to the WEF, capitalism is dead and we can no longer allow for free markets. Instead, we need a top-down governance, a New World Order (or One World Order), that can ensure “fair and equitable” distribution of dwindling resources. What they’re really saying, however, is that soon-to-be-useless people are gobbling up “their” resources.

They see us — you and me — as an existential threat to their luxurious lifestyle. So, their decades-old plan is to seize control of it all, transfer all wealth and private ownership into their own hands, and centrally control who gets what and when.

Other terms that also describe or play a part in this “reset” agenda include but are not limited to Agenda 2030, the Green Agenda, the New World Order, Sustainable Development, Build Back Better, and the Fourth Industrial Revolution — which has an unmistakable transhumanist component (i.e., the merging of biological or physical technologies in the human body2).

Intentional Energy Shortages Are Being Inflicted

The unstated implication of this socioeconomic “reset” is that it’s a global slave system. The world’s resources will be owned and controlled by a technocratic elite, and you’ll have to pay for the temporary use of everything.

You can learn more about this in my June 2022 interview with Patrick Wood, an expert on technocracy, featured in “It’s Now Crucial to Understand What We’re Up Against.” The actual allocation of resources will be based on things like your personal carbon footprint, social credit score and vaccination status.

In looking at the goals of The Great Reset, it’s easy to see why energy shortages are now suddenly being manufactured. They want to force a transition into “green energy” and they’re openly admitting3,4 that you will be made to suffer for as long as it takes to make this transition a reality.

The problem is that current green technologies are nowhere near efficient enough or prevalent enough to replace things like oil, gas, coal and nuclear power. We also don’t have the necessary infrastructure in place, so the transition is premature by decades.

Why then are global leaders insisting on making the transition right now? Could it be because a lack of energy will weaken nations and make populations heavily reliant on government, which in turn will be run by New World Order leaders?

The reason behind the crippling of our global food system is less obvious, but make no mistake, controlling food and shifting us away from a natural diet is an important part of The Great Reset.

While the destruction of food production is being justified by the Green Agenda, the real goal is to eliminate naturally-grown foods and replace them with patented foodstuffs. While the Green Agenda sounds honorable and beneficial, the end goal is anything but.

It’s all about population control through patented and highly processed food production. Think about it. If the only sources of food are private corporations, and your ability to obtain that food is dependent on being a “good citizen,” you’ll have no freedom whatsoever.

Genetically engineered crops have been around for decades, and now we’re seeing a strong push to transition from real meat to various protein alternatives, including lab-grown cell-based meats, vegetarian “meats” and insects — all in the name of “saving the planet” by eliminating methane-, nitrogen- and ammonia-producing livestock.

The Netherlands is currently in an uproar over the government’s decision to cut nitrogen pollution in half by 2030, which will drive farmers out of business.5 As with energy shortages, the resulting reductions in farming are said to be an “unavoidable” part of the green agenda to improve air, soil and water quality.6

Infrastructure projects in The Netherlands have even been halted over “fears they would cause emissions that breach environmental rules,” the Indian Express reports.7

Provincial authorities now have one year to work out how they’re going to meet the emission reduction targets. In response, an estimated 40,000 Dutch farmers have gathered in protest, arguing the attack on farming is irrational and unfair, as other industries responsible for far greater emissions — such as transport, construction and aviation — aren’t facing the same restrictions.

The U.K. has even issued an ‘urgent warning’ that gardening can cause heart disease by exposing you to harmful soil pollutants! So, now they want you to be afraid of growing your own food too. They’re actually recommending you wear a face mask while gardening.

In addition to restrictions imposed by the Green Agenda, nearly 100 food production facilities in the U.S. alone have also mysteriously burned down since 2021 (see video below).8,9

In what appears to be straight parody — but isn’t — the U.K. has even issued an “urgent warning” that gardening can cause heart disease by exposing you to harmful soil pollutants!11 So, now they want you to be afraid of growing your own food too. They’re actually recommending you wear a face mask while gardening.

While it’s difficult to predict just how bad it will get in any given area, it seems safe to say that everyone should prepare for some degree of food and energy shortages, regardless of where you live, as we’re staring at a perfect storm of confounding factors that are global in nature and therefore can cause far-reaching and somewhat unpredictable ripple effects.

So, if you still haven’t begun preparations, I urge you to reconsider. Those who fail to prepare are likely to find themselves in an incredibly difficult situation this fall and next year. I was a member of the Boy Scouts in middle school and it was one of the best experiences of my life. Their motto is to “Be Prepared,” which has served me well most of my life, and I encourage you to consider it.

Many say they feel unsure about how to prepare for food shortages and famine, having no real experience with that sort of thing. Modern life has also in many ways made us overly reliant on technologies that might not be available in an energy shortage situation. Foods that require refrigeration or freezing, for example, might spoil and go to waste if you lose electricity for more than two days.

While the solutions will vary from household to household, depending on your financial situation, location and skill level when it comes to growing and storing food, here’s a list of shelf-stable and nutritious items that can help you get through hard times.

Ideally, you’d be eating these foods on a regular basis anyway. This way, you can easily rotate your supply rather than buying something once and then not touching it for years on end.

Many prepper recommendations fall short in that they primarily focus on large quantities of rice and beans, but unless you’re willing to let your health go to waste, you’d be wise to focus on nutrition rather than carb-rich belly-fillers.

Animal protein — In my view, animal protein would be one of the most important supplies to stock up on. This would require the meat to be frozen. It would likely make sense to get another freezer to store enough meat for three to six months for your family. The key to making this work is to have a backup power supply, as there is a high likelihood the grid will go down and you will lose your investment.

The most economical way to do this would be to get ground bison, beef or lamb. Avoid pork and chicken due to high linoleic acid content. Ground meat is less expensive, but more importantly, takes up the least amount of space in your freezer.

Canned wild Alaskan salmon, mackerel and sardines — All of these contain healthy fats while being low in toxic water pollutants and heavy metals.

Tallow, ghee and coconut oil — These healthy fats are ideal for cooking and remain stable even without refrigeration.

Organic beef broth and/or collagen powder — Beef broth is an ideal source of collagen, but organic grass fed collagen powder will stay fresh longer. Collagen is the most common and abundant of your body’s proteins, and is required for bone health, tissue integrity and repair.

Whey protein — Whey protein is rich in leucine, which helps stimulate muscle protein synthesis, thereby promoting healthy muscle. Without a regular source of meat, it can be difficult to achieve enough leucine to maintain body protein from diet alone. Fortunately whey can be easily stored and can serve as a resource to preserve your muscle mass.

Rice — Rice is a gluten-free staple that can be stored for long periods of time. Interestingly, white rice (my favorite is basmati) is far preferred over brown rice as the antinutrients in brown rice impair its role as a clean source of carbohydrates. Ideally, place the bag in a food-grade bucket together with an oxygen absorber or two, and make sure the lid is well-sealed.

Honey — In addition to being a natural sweetener, local unadulterated honey also has health benefits. For example, it’s an effective cough medicine and can help combat respiratory infections and bacterial infections, including antibiotic-resistant bacteria.

Macadamia nuts — Nuts are frequently recommended as a good source of fiber, protein and healthy fats that will stay fresh for a long time without refrigeration, provided they’re in a sealed bag or container. However, the reason why this is a terrible idea is that all nuts except for macadamia are loaded with very high levels of the dangerous fat linoleic acid. So, storing any nuts would not at all be helpful as you would only be able to have around five a day.

Canned beef — Look for varieties that use salt as the only preservative. Lehman’s canned beef is one such option.12

Other key areas of basic preparation include:

Remember to consider and include analog devices and manual tools in your preparation. We’re so used to having unlimited electricity and continuous wireless communications, it can be difficult to imagine the restrictions you’ll face without them. If need be, turn off the breakers in your home for a day or two, ditch all wireless devices, and see what challenges come up. Then, figure out what you need to solve them.

Also, consider keeping hardcopies of useful books and important documents, such as your most recent bank statements, asset statements, the deed to your home or car and so on, in case electronic records become unavailable.

Entire books can, and have, been written on prepping, and some will take it to extremes. But while you probably won’t need an underground bunker stocked with a decade’s-worth of food, everyone, at this point, really ought to be preparing, to some degree, for food and energy shortages.