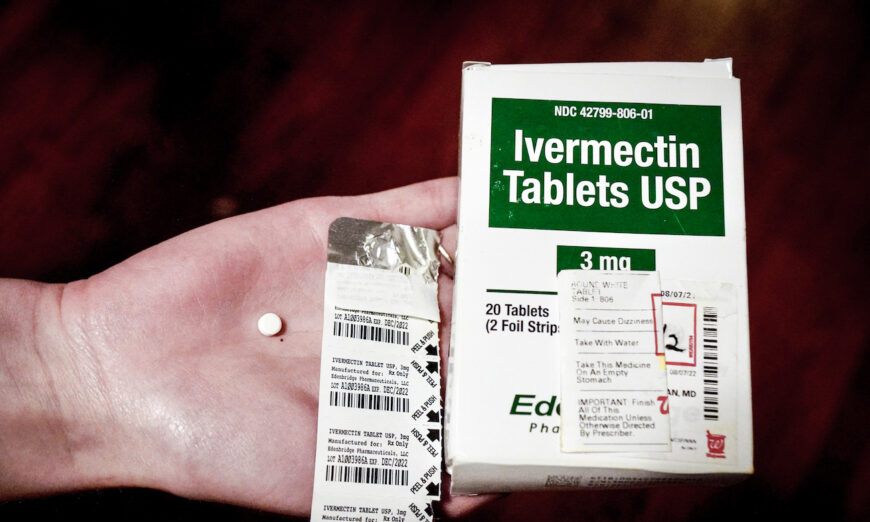 The U.S. Food and Drug Administration (FDA) says a drug called ivermectin does not work against COVID-19 but links to studies that show it does, an Epoch Times review has found.

The FDA’s website states, “Currently available data do not show ivermectin is effective against COVID-19.”

But half of the studies to which the FDA points support using ivermectin against COVID-19, according to the review.

The papers cut against the drug agency’s repeated exhortations for people not to take ivermectin for COVID-19. In Twitter posts, public statements, and emails, FDA officials have repeatedly warned against ivermectin. Some of those statements triggered a lawsuit from doctors who say the agency’s role is to approve drugs, not to issue recommendations. The suit was dismissed this week.

Dr. Pierre Kory, who frequently prescribes ivermectin for COVID-19 and co-authored a meta-analysis that concluded the drug is effective against the illness, told The Epoch Times that the government’s position on ivermectin “is one of the most glaring examples of the corruption of modern evidence based medicine.”

“There’s one message they want everyone to understand. And that message is that ivermectin doesn’t work,” Kory said. “That’s not a scientific conclusion, that’s theirs. That’s their perverted and distorted interpretation of the data.”

The FDA’s media office did not respond to a request for comment.

Dr. Janet Woodcock, a top official at the agency who was its commissioner from January 2021 to February 2022, told The Epoch Times via email that “ivermectin has been shown to be ineffective against COVID in large randomized trials.”

The FDA’s website points to a U.S. National Library of Medicine database of studies analyzing ivermectin against COVID-19. There are 88 studies listed in the database.

Out of studies that are listed, have been completed, and have results reported, half show or indicate ivermectin effectively combats or prevents COVID-19, according to the review by The Epoch Times.

They include papers reporting on results from randomized, controlled trials, which are often offered as the highest level of evidence by U.S. government officials. Such trials feature a group that receives a placebo and a group that receives the drug, randomization into groups, and blinding, or shielding operators and/or patients from the knowledge of which participants are receiving ivermectin.

Among the papers is a randomized, blinded, controlled trial that found people who received ivermectin and doxycycline, an antibiotic, recovered faster from COVID-19 than those who received a placebo.

Bangladeshi researchers reported the results from the trial of 363 participants on May 13, 2021, in the Journal of International Medical Research.

“Patients with mild-to-moderate COVID-19 infection treated with ivermectin plus doxycycline recovered earlier, were less likely to progress to more serious disease, and were more likely to be COVID-19 negative by RT-PCR on day 14,” they said. PCR has been used to test for COVID-19.

Another paper, published on July 7, 2022, in the International Journal of Infectious Diseases, found that that ivermectin decreased the level of COVID-19 and its viability. Israeli researchers in the randomized, controlled, open label trial compared 47 patients who received ivermectin against 42 who received placebos and said that “ivermectin significantly reduced the time of viral shedding and affected viral viability when initiated in the first week after evidence of infection.”

“There were lower viral loads and less viable cultures in the ivermectin group, which shows its anti-SARS-CoV-2 activity,” the researchers said. SARS-CoV-2 is a name for the virus that causes COVID-19.

A third paper concluded that a regimen of ivermectin and carrageenan works as a prophylaxis, or preventative medicine. Argentinian researchers found in the observational trial involving 229 health care workers that ivermectin helped prevent COVID-19 infection. A followup study involving nearly 1,200 workers confirmed the results. Both sets were reported in the Journal of Clinical and Biomedical Investigation on Nov. 17, 2020.

Ivermectin “could have saved so many lives,” Héctor Carvallo, one of the researchers, told The Epoch Times via email, adding that “it’s been a crime against mankind to prevent its prescription.”

Some other studies, including the largest ones, either found indications that ivermectin works against COVID-19 but did not achieve statistical significance or found no evidence that ivermectin is effective.

That includes a randomized, controlled, double-blind 2021 study by Mexican researchers that found ivermectin did not significantly impact hospitalization duration or mortality, and a randomized, controlled, double-blind 2022 trial by U.S. researchers that concluded ivermectin did not prevent hypoxemia, hospitalization, or death.

Scientists in Australia in April 2020 found that ivermectin worked well against the COVID-19 virus in cell culture, prompting doctors in multiple countries, including Peru and the United States, to start using it against the new illness.

Ivermectin is approved by the FDA to treat parasites. One version is used on horses and other animals.

The FDA quickly warned against using the animal form and said that people should “not take any form of ivermectin unless it has been prescribed to them by a licensed health care provider and is obtained through a legitimate source.”

Studies later in the year suggested ivermectin worked well in humans who had COVID-19, including halting the progression of disease (pdf), helping patients improve faster, and preventing COVID-19 infection, though other studies returned results that did not support ivermectin as a treatment.

The FDA maintained its stance against COVID-19, and created a new web page on March 5, 2021. It initially said, “The FDA has not reviewed data to support use of ivermectin in COVID-19 patients to treat or to prevent COVID-19; however, some initial research is underway.”

In August 2021, the FDA urged people against using ivermectin by telling them that “you are not a horse.” It linked to the page, which was updated the following month with the language it now contains about data not showing ivermectin is effective.

American doctors are allowed to prescribe drugs approved for one use for a different use, a practice known as off-label. But doctors who prescribed ivermectin soon found that many pharmacies stopped filling prescriptions, citing advice from the FDA and other U.S. government bodies.

Half of Studies Supportive

The FDA does not cite studies on its website to support its statement that data “do not show ivermectin is effective against COVID-19.”

“Clinical trials assessing ivermectin tablets for the prevention or treatment of COVID-19 in people are ongoing,” the agency adds, providing a link to the U.S. National Library of Medicine’s database.

Of the remaining 32, 16 found or indicate ivermectin is effective as a COVID-19 treatment or prophylactic, according to the Epoch Times review.

Two of the trials were randomized, controlled, and blinded. Nine others were randomized and controlled but were not blinded at all. Most of the rest were observational, meaning they analyzed data from real-world settings like hospitals, or used observational data to create what’s known as a synthetic control group.

The set of papers includes results of a randomized, controlled, open label observational trial (pdf) that found ivermectin combined with doxycycline, an antibiotic, reduced the time to recovery and the mortality rate, and a randomized, controlled, double-blinded trial that found ivermectin and doxycycline quickened recovery and patients were less likely to see their disease progress.

Of the 16 other studies, six reported mixed results. For instance, Spanish researchers reported in The Lancet in February 2021 that ivermectin did not have an impact on testing results, but that there was “a marked reduction” of self-reported symptoms such as loss of smell and cough, and lower levels of viral loads. The result “warrants assessment in larger trials,” the researchers said.

The remaining 10 studies returned results that did not favor ivermectin or did not achieve statistical significance.

U.S. researchers, for example, found that ivermectin probably worked better than a placebo, but that the results did not achieve statistical significance, prompting them to say in October that “this study adds to the growing evidence that there is not a clinically relevant treatment effect of ivermectin at this dose and duration.”

The FDA did not respond to a request for comment on the revelation that half of the studies it points to support using ivermectin (IVM) against COVID-19.

Woodcock, the FDA’s principal deputy commissioner, reviewed the studies. She was unimpressed.

The Bangladeshi trial, for instance, was criticized for primarily including young persons, and having a higher number of dropouts in the placebo arm. Woodcock said the Israeli study did not report “clinical outcomes” and noted many of the other papers had small numbers of participants.

“There are only a couple studies here that really look at the effects of IVM and see a positive clinical effect and they are much smaller than the negative studies,” Woodcock told The Epoch Times in an email.

The trials in favor of ivermectin are on the smaller side, and more likely to be observational. But that doesn’t necessarily mean they are inferior, Kory said. He cited research that found there was little difference between observational studies and randomized-controlled trials, as well as a paper that said “study design is only one factor that determines study quality.”

The FDA isn’t the only government group opposed to using ivermectin to treat COVID-19. The National Institutes of Health (NIH) COVID-19 Treatment Guidelines Panel recommends against it, citing several of the larger trials that found little or no benefit for ivermectin. The panel cites none of the papers that found a positive effect.

Many of those studies have been criticized over their design. One major factor, critics say, is participants not receiving ivermectin soon after a positive test or the start of symptoms.

In one trial, researchers acknowledged that more than 4 out of 10 participants did not receive the dosage level that was listed as the “goal dose.” Further, the median time from the start of symptoms to treatment was six days, and the treatment duration was just three days. The trial, called ACTIV-6, was backed by the NIH.

The corresponding author for the trial did not return a request for comment. The authors said that “there was no evidence of a differential treatment effect based on the median time of symptom onset to receipt of study drug.”

In another trial that reported little difference between the treatment and control groups, the treatment group received ivermectin days after starting to show symptoms.

Ivermectin works best when applied within 24 hours of symptom manifestation, according to a meta regression of ivermectin studies performed by by an unnamed group of researchers.

“They literally try to treat as late into the disease as they can, for a short duration as they can, at the lowest dose that they can. And they also try to find as healthy and mild patients as you can,” Kory said.

“And yet, when they conduct those kinds of trials, it’s on the front page of a high-impact journal and the conclusion states, ‘this shows there’s no role for ivermectin in treatments.’ Absolutely absurd. And so it’s it’s really just corruption of these trials.”