Do You Really Understand Your Risk of Dying From COVID?

If you're still panicked about COVID, it's time to stop.
Health Viewpoints 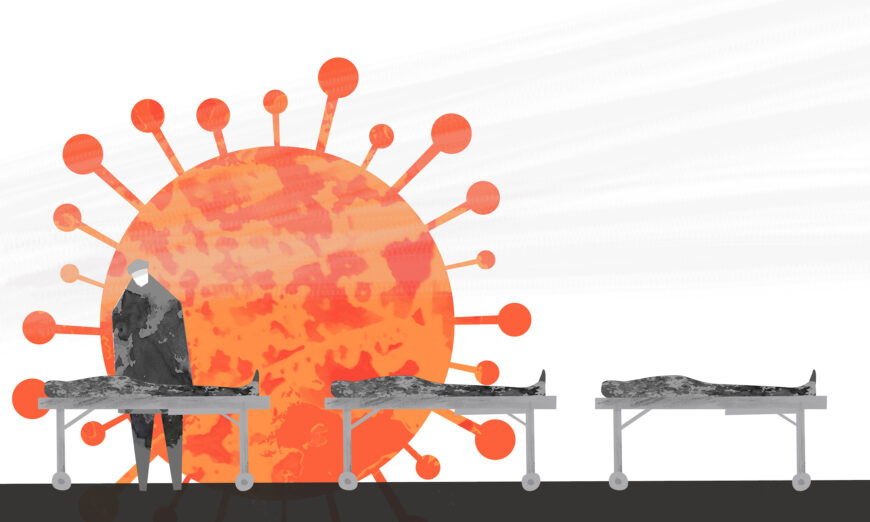 With the dodgy tests, $100,000 payouts to hospitals and ‘death by ventilators,’ it was a manufactured crisis from the start.

Do you really understand your risk of dying from COVID-19? According to The Hill,[1] a poll taken in mid-August 2020 showed “Americans have a significant misunderstanding of the risk of death from COVID-19 when it comes to different age groups.”

On average, Americans were under the impression that people under the age of 44 made up about 30% of deaths, when the actual figure was less than 3%. At the time, 58% of those polled who were between the ages of 18 and 24 also said they feared “significant health consequences” were they to get infected, when in reality this age group accounted for a mere 0.1% of COVID deaths.

Similar stats were found in April 2021, when the Washington Examiner reported on polls showing “COVID-19 alarmism” had resulted in 18- to 24-year-olds being the “most anxious about resuming normal life — despite being by far the least at risk from COVID-19.”[2]

At the time, the reported death rate among this group was 0.006%, yet half reported being nervous about interacting socially. Meanwhile, in the highest-risk group, those 55 and older, only 31% were nervous about social interactions; 65% were not.

Has anything changed? Anecdotally, it seems mask wearers these days are primarily young (and seemingly healthy) people, while the majority of older individuals have embraced the freedom to breathe freely again.

Based on a new preprint analysis by professor John Ioannidis, there’s really no reason for anyone to live in fear anymore, regardless of your age, as your risk of dying from COVID is — and always was — minuscule across the board.

Ioannidis’ paper,[3][4] posted on the preprint server medRxiv October 13, 2022, looked at pre-jab national seroprevalence studies to ascertain the age-stratified infection fatality rate (IFR) of COVID-19 in people between the ages of birth and 69. As noted in the abstract:

“The infection fatality rate (IFR) of COVID-19 among non-elderly people in the absence of vaccination or prior infection is important to estimate accurately, since 94% of the global population is younger than 70 years and 86% is younger than 60 years.

Based on these data, the authors came up with the following median IFRs:

“At a global level, pre-vaccination IFR may have been as low as 0.03% and 0.07% for 0-59 and 0-69 year old people, respectively. These IFR estimates in non-elderly populations are lower than previous calculations had suggested … Large differences did exist between countries and may reflect differences in comorbidities and other factors.”

The graph below illustrates the ranging IFRs across populations in different countries.

As reported by the Daily Skeptic,[7] “The significantly higher values for the top seven [countries] suggest some of the difference may be an artifact of, for example, the way COVID-19 deaths are counted, particularly where excess death levels are similar …”

Wide variations in IFR between countries for the same age groups were also found, which they postulate may be due to:[8][9]

Presenting this same data as COVID survival rates in the pre-jab era (i.e. 2020, before the rollout of the COVID shots) instead of fatality rates, you get the following:

Now, these numbers were all prior to the COVID jabs. Emerging evidence suggests the shots are causing immune deficiency in some people, thereby actually raising their risk of dying from SARS-CoV-2 infection, even with the now milder strains.

It’s important to understand that when you’re dealing with a risk that is but a fraction of a percent, the real-world hazard is so small it’s really pointless to worry about.

As a follow up to Ioannides’ new paper, Ivor Cummins, founder of TheFatEmperor.com, decided to review the real-world risk of dying from COVID-19 based on published data from the Irish census bureau and the central statistics office (CSO) for 2020 and 2021 (see video above[10]).

In other words, these data are based on actual deaths, not projections or estimates. He also compares it to the risk of suffering other causes of death, such as accidental poisoning or falling off a ladder. Here’s a summary of Cummins’ findings:

Keep in mind that these deaths are not confirmed as being due to severe COVID infection. They’re people who died with a COVID positive PCR test, so the real-world risks are likely to be even lower if you’re healthy and have no comorbidities such as obesity, diabetes and preexisting heart disease.

In all, only 150 Irish people died from COVID during 2020 and 2021 who had no underlying health conditions contributing to their deaths, meaning they truly died from COVID and nothing else.

Cummins has also published a draft paper titled “Evidence For and Against the Effectiveness of Lockdown Policies.”[11] He points out that during 2020 and 2021, there was massive PCR positivity across the Irish population, so lockdowns were NOT the reason for why the death toll was so low.

People were testing positive in droves, even during lockdowns, yet very few were dying. The only reason that could be so is because the infection really wasn’t as lethal as they made it out to be.

People were testing positive in droves, even during lockdowns, yet very few were dying. The only reason that could be so is because the infection really wasn’t as lethal as they made it out to be.

Why Did so Many Die ‘With’ COVID?

As of early May 2022, the official COVID death toll in the U.S. was reported as 1 million, and 4 out of 10 Americans polled claimed they knew someone who died of COVID.[12] But did they really die from COVID? That is the question. There’s ample evidence suggesting the vast majority of so-called “COVID deaths” were of three main categories:

Release Any Vestige of Fear

In closing, COVID-19 was never as dangerous as they made it out to be, and the virus has not gotten more lethal over time. It’s gotten milder. More infectious, yes, but milder, being near-indistinguishable to the common cold. So, please, if you’re still panicked about COVID, it’s time to stop. It’s safe to stop. It was a manufactured crisis from the start.

I encourage you to read Dr. Russell Blaylock’s article, “COVID Update: What Is the Truth?” published in the April 2022 issue of Surgical Neurology International. Here’s an extended excerpt from this excellent article in which he covers most if not all the basics:[20]

“The COVID-19 pandemic is one of the most manipulated infectious disease events in history, characterized by official lies in an unending stream lead by government bureaucracies, medical associations, medical boards, the media, and international agencies.

We have witnessed a long list of unprecedented intrusions into medical practice, including attacks on medical experts, destruction of medical careers among doctors refusing to participate in killing their patients and a massive regimentation of health care, led by non-qualified individuals with enormous wealth, power and influence …

Neither Anthony Fauci, the CDC, WHO nor any medical governmental establishment has ever offered any early treatment other than Tylenol, hydration and call an ambulance once you have difficulty breathing. This is unprecedented in the entire history of medical care as early treatment of infections is critical to saving lives and preventing severe complications.

Not only have these medical organizations and federal lapdogs not even suggested early treatment, they attacked anyone who attempted to initiate such treatment with all the weapons at their disposal — loss of license, removal of hospital privileges, shaming, destruction of reputations and even arrest …

Never in the history of American medicine have hospital administrators dictated to its physicians how they will practice medicine and what medications they can use.

The CDC has no authority to dictate to hospitals or doctors concerning medical treatments. Yet, most physicians complied without the slightest resistance … It should be an embarrassment to the medical profession that so many doctors mindlessly followed the deadly protocols.”

Big Money for the Hospitals

Blaylock continues addressing the only rational reasons for why hospitals were following clearly lethal protocols passed down from on-high by medically illiterate bureaucrats:

“The federal Care Act encouraged this human disaster by offering all US hospitals up to 39,000 dollars for each ICU patient they put on respirators, despite the fact that early on it was obvious that the respirators were a major cause of death …

In addition, the hospitals received 12,000 dollars for each patient that was admitted to the ICU — explaining, in my opinion and others, why all federal medical bureaucracies (CDC, FDA, NIAID, NIH, etc) did all in their power to prevent life-saving early treatments. Letting patients deteriorate to the point they needed hospitalization, meant big money for all hospitals …

It has been noted that billions in Federal COVID aid is being used by these hospital giants to acquire these financially endangered hospitals, further increasing the power of corporate medicine over physician independence …

The draconian measures established to contain this contrived ‘pandemic’ have never been shown to be successful, such as masking the public, lockdowns, and social distancing. A number of carefully done studies during previous flu seasons demonstrated that masks, of any kind, had never prevented the spread of the virus among the public …”

Blaylock also reviews how truth has been suppressed while falsehoods have flourished during these COVID years:

“The designers of this pandemic anticipated a pushback by the public and that major embarrassing questions would be asked. To prevent this, the controllers fed the media a number of tactics, one of the most commonly used was and is the ‘fact check’ scam …

When sources are in fact revealed they are invariably the corrupt CDC, WHO or Anthony Fauci or just their opinion. Here is a list of things that were labeled as ‘myths’ and ‘misinformation’ that were later proven to be true.

Blaylock goes on to review COVID jab hazards, evidence of “hot lots,” the unprecedented lack of autopsies being done on people who die shortly post-jab, Pfizer’s deceptive trial practices, the shameful vilification of useful drugs, going even so far as to fabricate studies to make them look deadly, the dangers of the COVID jab during pregnancy, the skyrocketing excess mortality post-jab and much more.

It’s a fairly long article, but well worth reading through for a summary of where we’ve been — and where we’re headed.

[11] Evidence For and Against the Effectiveness of Lockdown Policies, Draft C2