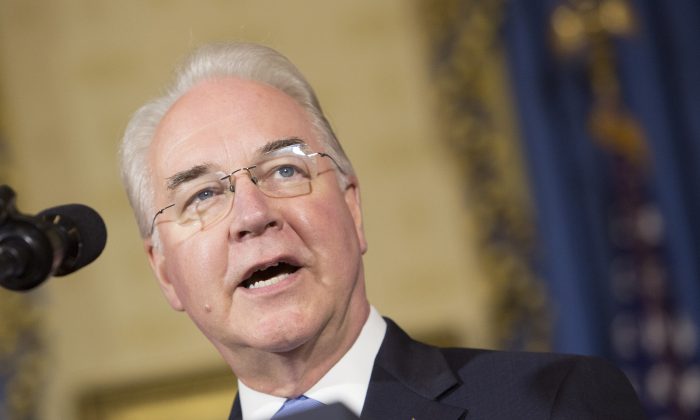 Health Secretary Tom Price offered his resignation to President Donald Trump on Friday after he had come under criticism for his extensive use of private and military aircraft.

“Secretary of Health and Human Services Thomas Price offered his resignation earlier today and the President accepted,” the White House said in a statement.

President Trump is designating Don J. Wright of Virginia to serve as Acting Secretary. Wright currently serves as the Deputy Assistant Secretary for Health and Director of the Office of Disease Prevention and Health Promotion.

Price had found himself in hot water after making extensive use of private and military aircraft for domestic and international travel.

Politico reported that Price used military aircraft for travel to Africa and Europe at a cost of over $500,000, bringing the total cost of the Health Secretary’s travel to over $1 million.

Price has said that all trips he took using the planes were work related.

The Department of Health and Human Services had announced an internal review, during which time Price would not use private jets.

Price has also been unable to deliver the president a replacement of the Affordable Care Act, also known as Obamacare. A vote in July on a bill in the Senate failed after three senators voted against, and a vote scheduled for Sept. 30 on another bill introduced by Sens. Lindsey Graham and Bill Cassidy was canceled.

Trump said that his administration prides itself on reducing costs for taxpayers. Trump gave the example of Lockheed Martin slashing the costs of the F-35 fighter jet by millions after he got involved in negotiations.

Speaking in Indianapolis on Wednesday Trump cited the cost of $50 million for a new fence around the White House as an example of government waste.

“I assume it’s a strong fence,” Trump said, adding that he believed it could be built for $1 million to $1.5 million.

In August, Trump said that he’s not looking to fill all government positions so as to reduce the size of government and save money for the country.

“We are not looking to fill all of those positions. Don’t need many of them – reduce size of government,” Trump wrote on twitter.

Trump himself is not taking a salary for his work as president.