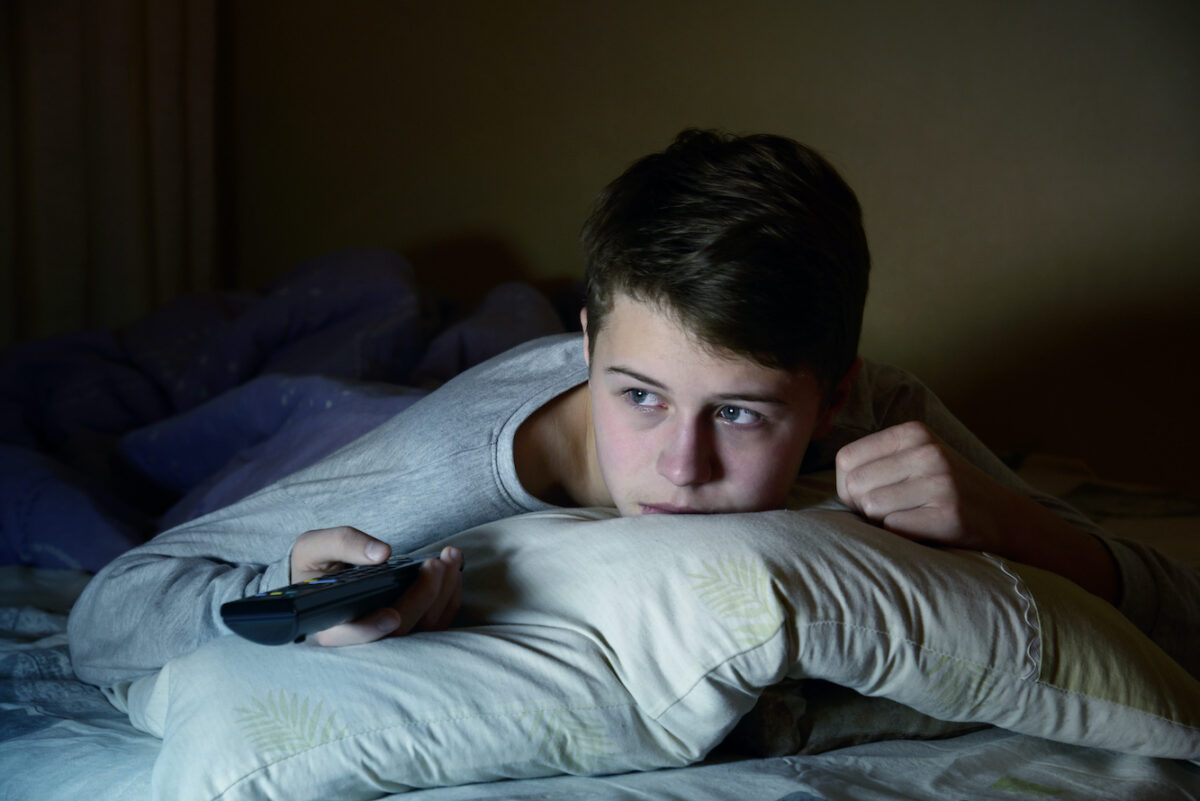 Exposure to light leads to advances or delays in your circadian rhythm, known as phase shifts. (Shutterstock)
Sleep

Health Risks Linked to Leaving Lights on at Night

Light at night can disrupt sleep patterns and contribute to obesity, diabetes, and more
BY Joseph Mercola TIMEAugust 19, 2022 PRINT

Ensuring your bedroom is pitch black at night—without light exposure from a television, window, cellphone, or even your alarm clock—is a simple way to reduce your risk of chronic disease. It was only about 130 years ago that electric light was invented, bringing with it drastic changes in the way humans function on a daily basis.

Now that we’re able to work, eat, and play well after the sun sets, artificial lighting has had immense benefits for us, but our endogenous circadian clocks haven’t fully adjusted. The fact is, exposure to unnatural electric light, including light at night (LAN), disrupts sleep and many other biological processes.

The full effects of exposure to light at night are only beginning to be understood, but a study published in Sleep in June has demonstrated that exposure to any amount of LAN has detrimental effects on the health of older adults, increasing the risk of obesity, high blood pressure, and diabetes.

Exposure to Light at Night Raises Risk of Chronic Disease

For millennia, humans were exposed to light from the sun during the day and near complete darkness at night, except for light from the moon, stars, and fire. Now, it’s difficult for humans to avoid light exposure at night, which comes from televisions, computers, cellphones, light pollution, and a multitude of other sources.

“Whether it be from one’s smartphone, leaving a TV on overnight, or light pollution in a big city, we live among an abundant number of artificial sources of light that are available 24 hours of a day,” Dr. Minjee Kim, lead author of the new study and assistant professor of neurology at Northwestern University Feinberg School of Medicine and a Northwestern Medicine physician, said in a statement.

Kim and colleagues conducted a real-world study involving 552 men and women between the ages of 63 and 84. They wanted to determine if exposure to LAN increased risk factors for cardiovascular disease, so they measured light exposure using wrist-worn devices over a seven-day period.

Compared to adults who weren’t exposed to LAN, those who did experience light exposure at night were significantly more likely to be obese or have high blood pressure or diabetes. Specifically:

Those exposed to LAN were also more likely to wake after falling asleep, and the researchers suggested more studies should be conducted to understand the long-term effects of light exposure at night on cardiometabolic risks.

Why You Should Turn Off the TV Before Going to Sleep

Past research has also highlighted the health risks of not sleeping in complete darkness. In March, a study of 20 healthy young adults published in PNAS, a journal of the National Academy of Sciences, revealed that even one night of sleep with moderate light exposure increased nighttime heart rate, decreased heart rate variability, and increased next-morning insulin resistance.

“These results demonstrate that a single night of exposure to room light during sleep can impair glucose homeostasis, potentially via increased SNS [sympathetic nervous system] activation,” the researchers noted. In 2019, JAMA Internal Medicine published a study involving 43,722 women that also found that exposure to artificial light at night while sleeping was significantly associated with an increased risk of weight gain and obesity.

The link was particularly strong for women who slept with the television or a light on in their bedroom, and the researchers suggested incorporating strategies to reduce nighttime light exposure in public health recommendations for obesity:

“Given the association found between exposure to ALAN [artificial light at night] while sleeping and subsequent weight gain and obesity in our study and the cross-sectional evidence from other studies, public health strategies to decrease obesity might consider interventions aimed at reducing ALAN while sleeping.”

Compared with women who had no exposure to artificial light at night, sleeping with a television or light on in the room was associated with a greater risk of gaining about 11 pounds (5 kilograms) or more, a body mass index increase of 10 percent or more, incident overweight, and incident obesity over the course of the follow-up period.

There were notable differences in weight gain depending on the type of light exposure. While sleeping with a small nightlight wasn’t associated with weight gain, sleeping in a room with light coming from outside the room was associated with a modest weight increase. However, women who slept with a light or television on were 17 percent more likely to have gained about 11 pounds or more.

Study co-author Chandra Jackson, head of the National Institute of Environmental Health Sciences (NIEHS) Social and Environmental Determinants of Health Equity Group, explained that the study could have implications for people living in urban areas, where sources of artificial light such as streetlights and neon signs could interfere with the sleep hormone melatonin.

“Humans are genetically adapted to a natural environment consisting of sunlight during the day and darkness at night,” she said in a 2019 National Institutes of Health article. “Exposure to artificial light at night may alter hormones and other biological processes in ways that raise the risk of health conditions like obesity.”

Studies Highlight the Detrimental Effects of Light at Night

Disrupted sleep may partly explain why LAN increases obesity risk, and previous studies have also linked sleep disruptions to obesity and diabetes. A study published in Diabetes Care in 2019 that followed 2,003 men and women for a mean of six years found irregular sleep patterns increased the risk of metabolic syndrome by 23 percent for each one hour of sleep difference, while chronic one-hour loss increased the risk by 27 percent.

The research revealed that irregular sleep, including day-to-day variability in sleep duration and timing, is associated with metabolic abnormalities. Not sleeping enough has also been linked to similar health risks. The study reads:

“Modern environment and lifestyle, such as increased light exposure and activities during night and widespread use of electronic media and mobile devices, not only deprive humans of sufficient sleep but also considerably disturb the regularity of sleep behaviors.

“An adequate amount of sleep, which is essential for global rejuvenation of the human body, plays a central role in normal functioning of metabolism and energy homeostasis. As a result, reduced quantity of sleep has been associated with higher risk of obesity, metabolic syndrome, and diabetes in numerous previous studies.”

Exposure to light leads to advances or delays in your circadian rhythm, known as phase shifts. Typically, exposure to light early in the morning causes a phase advance, which leads to earlier waking. Light exposure at bedtime will lead to a phase delay, or later wakening.

Nighttime exposure to light inhibits the secretion of melatonin, which can cause circadian disruptions that play a role in cancer, notes a study published in the journal Cancer in 2021. The same study found evidence that suggests LAN may increase thyroid cancer risk, too, as thyroid function is regulated by circadian rhythm.

Another study published in the International Journal of Cancer in 2020 found that higher exposure to outdoor light at night may increase the risk of postmenopausal breast cancer.

A study published in the journal Cancer followed 464,371 participants in the National Institutes of Health–American Association of Retired Persons Diet and Health Study for an average of 12.8 years. Satellite data were used to estimate nighttime light exposure, which was then linked to residential addresses, while thyroid cancer cases were followed via state cancer registries.

A positive association was found between light exposure at night and thyroid cancer risk, in a study published in the International Journal of Molecular Sciences in 2017. Those in the highest quintile of nighttime light exposure had a 55 percent increased risk of thyroid cancer compared to those in the lowest quintile. Aside from helping you sleep, melatonin may help prevent cancer, acting as a “full service anti-cancer agent,” inhibiting the initiation, progression, and metastasis of cancer.

The suppression of melatonin that occurs during exposure to light at night is one explanation for LAN’s detrimental effects. According to a review by NIEHS researchers:

“Potential adverse health effects from light-induced circadian disruption are mediated in part by melatonin suppression. Light at night of sufficient level and duration, appropriate wavelength, and appropriate timing can shift the timing and/or reduce the amplitude of the nighttime melatonin signal, as may happen in night-shift workers.

“This may contribute to sleep changes and circadian disruption, which in turn affect a host of cellular mechanisms (such as metabolism and cell cycling) and neurobehavioral processes (such as mood regulation and cognitive outcomes). These disturbances may potentially lead to adverse health outcomes.”

Because it involves exposure to artificial light at night, shift work has been categorized as a probable carcinogen that induces circadian disorganization, which, in turn, is linked to elevated rates of “cancer, diabetes, cardiovascular risks, obesity, mood disorders and age-related macular degeneration,” notes a review published in Life Sciences in 2017.

Even Dim Light at Night Should Be Avoided

Making a conscious effort to eliminate light in your bedroom can go a long way toward protecting your health. If your bedroom is affected by light pollution, be sure to use blackout shades to keep light out, or wear an eye mask when you go to sleep. Remove all sources of light from your bedroom, including a digital alarm clock or cellphone.

You should also swap out LED lights with incandescent bulbs, which are less efficient at suppressing melatonin, particularly in areas where you spend most of your time during the day and evening, such as your kitchen, bathroom, and bedroom. Leave the LEDs for areas such as hallways, closets, garages, and porches, where your exposure to them is minimal.

When it gets to be late afternoon and evening, wear amber-colored glasses that block blue light, and turn off electronics—or at least be sure to wear the glasses while you’re using them. You can also install blue light-blocking software, such as Iris, on your computer, cellphone, and tablet. Many devices have built-in blue light reduction modes you can turn on or even schedule for certain times of the day.

In addition to sleeping in pitch blackness, you can further optimize your circadian rhythm by getting exposure to bright natural light during the day. Ideally, strive for at least 15 minutes of sunlight exposure in the morning hours to help to regulate the production of melatonin, dropping it to normal daytime levels, so you feel awake during the day and can sleep better at night.