Why the Steep Rise in Disease Outbreaks Since 1980?
0
Share Now
TelegramFacebookTweetEmailTellMeWeReddit
Copy Link 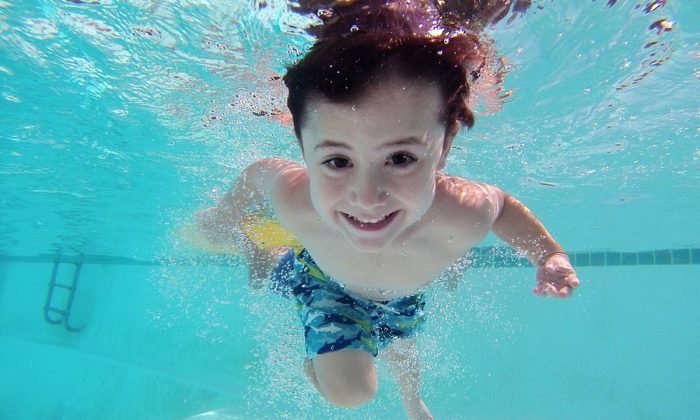 Stock image of a child in a swimming pool. (Adrit1/Pixabay)
Health News

It is summer time and while many are cooling off in the pool or planning time in a water park, government officials have issued a health warning: Communal water may be infected with fecal germs and you need to take precautions.

“The germs that cause recreational water illnesses (RWIs) can be spread when swallowing water that has been contaminated with fecal matter (poop),” said the Centers for Disease Control and Prevention (CDC) in a warning on its website.

Recreational water illnesses happen due to the germs and chemicals found in the water people swim in, according to the CDC.

The illnesses listed by CDC include diarrheal illnesses, rashes, ear infections, respiratory infections, and chemical irritation of the eyes and the lungs. “The most commonly reported RWI is diarrhea,” said CDC.

The CDC said a person suffering from diarrhea can easily infect the water that is shared by all swimmers. “It’s not sterile. It’s not drinking water,” it said.

RADIO FREE NEWS: People getting sick from fecal parasite in pools, CDC says.
Illnesses caused by a chlorine-resistant parasite found in fecal matter called cryptosporidium are on the rise, according to a study from the CDC.

Health officials said that germs causing RWI are killed within minutes by chlorine but it does not happen right away.

“It takes time to kill germs and some germs, such as Cryptosporidium (or Crypto for short), can live in properly treated water for days. This means even the best maintained aquatic venues can spread germs,” said CDC.

There were 493 outbreaks of recreational waterborne diseases reported from 2000 to 2014. These resulted in 27,219 illnesses and eight deaths, according to the CDC.

It said a third of these outbreaks happened in hotel pools or hot tubs, according to a report published in the Morbidity and Mortality Weekly Report.

#Health alert — Illness linked to swimming pools is on the rise, per the CDC.https://t.co/wIrzBqeiR3

It warned that more than half of the diarrhea outbreaks happened in the summer season—the peak season for swimming.

“Swallowing just a mouthful of water with Crypto in it can make otherwise healthy kids and adults sick for weeks with watery diarrhea, stomach cramps, nausea, and vomiting,” said Michele Hlavsa, chief of the CDC’s Healthy Swimming Program.

How to Prevent RWIs?

The CDC said one should keep “pee, poop, sweat, blood, and dirt out of the water.”

It said those suffering from diarrhea should not go into the water. “Diarrhea and swimming don’t mix! Diarrhea is the most common recreational water illness. Swimmers who are sick with diarrhea—or who have been sick in the last two weeks—risk contaminating pool water with germs,” said CDC.

Health officials say the best way is prevention in this case.  “Chlorine cannot kill Crypto quickly. We need to keep it out of the water in the first place. Don’t go into the water, and don’t let your kids go into the water, if sick with diarrhea,” explained Hlavsa.

Tonight at 6, the CDC issues a warning about hotel pools and hot tubs. What illnesses you could be exposing your family to, plus a pool inspector tells us how they work to keep pools safe. #WATE pic.twitter.com/4CQf3No5MM

The CDC explained that a single bowel movement can contain as much as hundreds of millions to one billion germs. “Swallowing even a small amount of water that has been contaminated with these germs can make you sick. Tiny amounts of fecal matter are rinsed off all swimmers’ bottoms as they swim through the water.

“That is why it is so important to stay out of the pool if you are sick with diarrhea, shower before swimming, and avoid swallowing pool water,” the CDC explained.

Another RWI that can happen in communal water is hot tub rash. It is caused by a microscopic germ that is common in the water and soil.