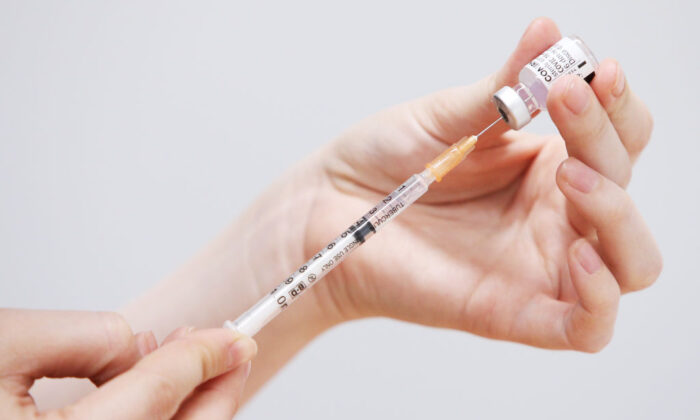 Health Minister Greg Hunt has assured that there are enough vaccines for booster shots despite the timeframe between the second dose and the booster shot being brought forward by a month.

The minister announced at the press conference at Mornington Village pharmacy on Dec. 12 that 4.1 million Australians will be eligible to receive the boosters, with 683,000 booster shots currently already administered.

Hunt assured that there would be enough booster doses going around despite the timeframe between the second dose and the booster shot being shortened to 5 months, as per ATAGI’s recommendations.

“We have 151 million doses that have been set aside for boosters. There’s enough for all Australians,” he said.

From Dec. 12, all Australians over 18s are eligible to receive their booster shot as long as they have been fully vaccinated for five months, as per ATAGI’s recommendations. Apart from Pfizer, TGA has also approved Moderna as a booster vaccination option.

Secretary of the Department of Health Professor Brendan Murphy said it did not matter if the vaccine for the primary course doses is not the same as the booster shots.

“The evidence would suggest that there’s no clear difference. So, it depends what’s available, and people sometimes might have a preference.”

Therefore, those that have Pfizer as their primary course can take Moderna or Pfizer boosters, and the same applies to those with Moderna and Astra Zeneca as their primary vaccination courses.

Murphy reasoned that the ATAGI brought forward the timeframe from six months after finding that there is some decline in protection to the Omicron at six months.

“They felt bringing it forward to five months was worth doing, and particularly based on some data out of Israel which showed that is a very good time.”

The news of booster shots comes as the University of Melbourne at The Peter Doherty Institute for Infection and Immunity released a new study on Dec. 13 regarding three confirmed cases of second infections of COVID-19 in Melbourne.

The three patients lived in the same household and were diagnosed with COVID-19 in Jul. 2021.

All three had also been diagnosed with COVID-19 12 months prior in Jul. 2020, during the “second wave” of Jun. – Oct. 2020; introduced into Victoria following a hotel quarantine breach in May 2020.

There had been a large COVID-19 outbreak at the workplace of patients 1, and 2. Patient 1 had worked during the acquisition period – the period during which one is still asymptomatic –while infectious co-workers were present.

After genomic sequencing, the team found that the virus in the 2021 infection differed from the virus found in the infection in 2020, confirming the patients were infected by a different strain of the virus after the first infection rather than viral shedding.

Second infections with COVID-19 are thought to affect fewer than 1 percent of people that have recovered following an infection. Prior to this case, no other confirmed cases of second COVID-19 infections have been reported in Australia.

Professor Benjamin Howden, Director of the Public Health Laboratory at the University of Melbourne and colleagues, wrote that “the three patients had no known immunocompromising conditions and were not eligible for COVID-19 vaccination at the time of either of their infections. Furthermore, illness severity was similar during the first and second infections; with neither respiratory support nor hospitalisation required.”

The report suggested that people who have recovered from COVID-19 may be “less likely to seek vaccination.”

The study concluded that the occurrence of second infections in Australia, where the incidence of COVID-19 has been relatively low, indicates that more should be done to spread public awareness of reinfection.

“Doctors should encourage recovered patients to be vaccinated, and that public awareness of the possibility of reinfection should be promoted to encourage vaccination, testing, and protective behaviours.”

As of Dec. 12, 93.3 percent of Australians have received their first dose, with 89.2 percent fully vaccinated.