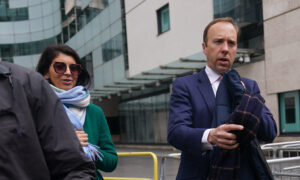 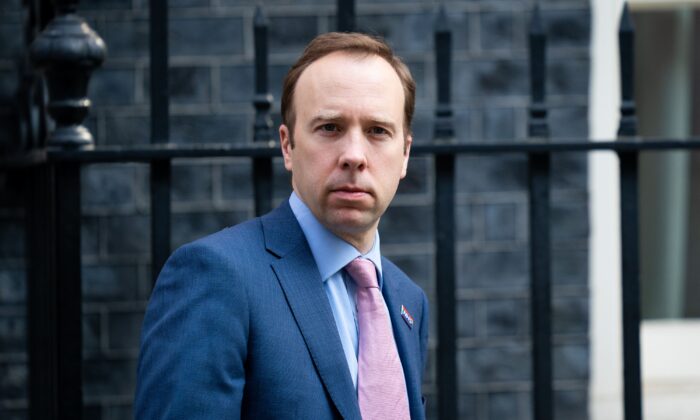 The government will be launching an internal investigation into how CCTV footage of Matt Hancock was leaked, a Cabinet minister has said.

Northern Ireland Secretary Brandon Lewis said the Department of Health and Social Care (DHSC) will seek to find out how the footage became public, as former cabinet ministers have said they never had cameras in their offices.

The CCTV leak led to Hancock’s resignation as health secretary on Saturday after it exposed him in an embrace with aide Gina Coladangelo last month—breaking his own coronavirus rules.

Hancock had no idea that the camera in his office existed, according to The Daily Telegraph.

Asked on Sky News’s “Trevor Phillips On Sunday” programme about the leak, Lewis said: “It’s something we need to get to the bottom of. Quite rightly what happens in government departments can be sensitive and important. So, yes, I do know that is something the Department of Health will be taking forward as an internal investigation.”

It comes despite Downing Street refusing to comment on Friday on whether a probe will be launched.

Lewis also told BBC One’s “Andrew Marr Show” that the investigatory team will be looking into the issue “across government,” adding, “I have to say I always take the view it’s best to assume that everything you’re saying or putting in writing is going to be reported somewhere.”

Former health secretary Jeremy Hunt told the programme it is “completely unacceptable” that ministers are being filmed inside their offices.

The chairman of the Commons Health Select Committee said: “It’s completely unacceptable from a security point of view that ministers are being filmed inside their own offices without their knowledge. And so there’ll be issues that our intelligence agencies will want to look at very, very carefully.”

He added that there is an “another issue” over ministers’ ability to have private conversations that would “enable them to make the right decisions” without being spied on.

Former Cabinet ministers Alan Johnson and Rory Stewart both said there had never been cameras in their offices during their time in government.

Johnson told “Trevor Phillips On Sunday”: “I could never understand why there was a camera in the secretary of state’s office. There was never a camera in my office when I was health secretary or in any of the other five Cabinet positions.”

Stewart, who was international development secretary from May to July 2019, said in a Twitter post, “I definitely did not know that there were cameras in any of my ministerial offices (in fact I was told—when I asked if there were any cameras—that there were not cameras in my office in DfiD).”

He added: “If it were a departmental camera—perhaps focused on the door for security reasons—then it would be seen by the security officers. Someone else installing it would have some challenges—security passes, doors, access to ministerial office etc.”

Think tank the Henry Jackson Society has reported the disclosure of the footage as a breach of the Official Secrets Acts to the Metropolitan Police, but the force said it considered the leak “a matter for the relevant government department” rather than police.

Under the Data Protection Act 2018, business operators of CCTV must register their details with data and privacy protection regulator the Information Commissioner’s Office and be able to justify its usage.

Companies must tell people they may be recorded, usually through signage, control who sees recordings, and ensure the system is only used for its intended purpose.

Monitoring of staff without their knowledge is only allowed in exceptional circumstances, such as if they are suspected to be breaking the law, and can only be done as part of a specific investigation.