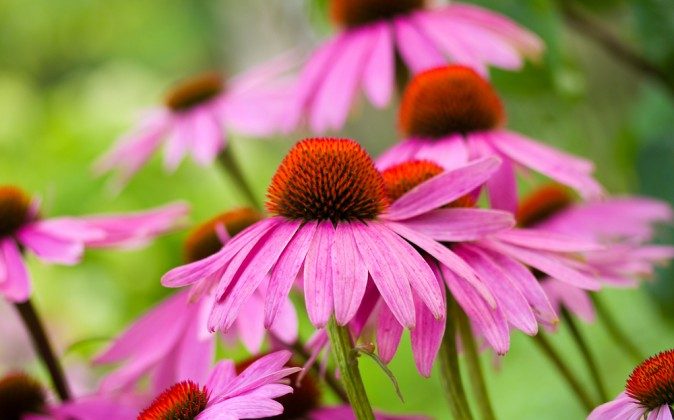 Health Check: Can You Treat the Common Cold?

With symptoms including a runny nose, sore throat, sneezing, cough, headaches and fever, the common cold can leave you feeling rotten for up to two weeks.

As the name suggests, they’re annoyingly common, with the average adult likely to get two or three colds a year, while children average ten.

Common colds are caused by more than 200 different viruses and tend to be milder than the flu. But while the influenza vaccination can prevent against the most common circulating strains of the flu, there’s no equivalent for the common cold.

So, can you prevent the common cold? Or treat it once you have it? Let’s put four popular therapies to the test: echinacea, garlic, vitamin C and zinc.

Echinacea is a group of flowering plants common in North America, and was a traditional Native American medicine. These days you can buy the product in capsules, tablets or drops.

Around one in 20 Australians take echinacea, in the hope that extracts will stimulate immunity and kill off any bugs encountered.

In terms of prevention, taking echinacea products daily to avoid the common cold may slightly reduce the risk of getting a cold, but the evidence is rather murky. If we pool the results from studies that compared Echinacea to placebo treatment, people who took Echinacea seemed to get fewer colds. But there is major inconsistency between the individual studies, so combining them together this way isn’t very valid.

In terms of treatment, there is no convincing clinical evidence that taking echinacea products at the onset of symptoms can cure a cold or reduce the duration of illness.

However, it’s difficult to come to any clear conclusions or recommendations about echinacea’s effect on the common cold because the preparations studied have varied, with different species, parts of the plant, preparation method and dosage.

Echinacea products are not without side effects, such as allergic reactions in children which, though uncommon, can be severe.

Garlic has been promoted as a natural preventative against the common cold, taken in commercial products or eaten raw.

It too is seen to have antiviral and antimicrobial properties, and manufacturers claim it boosts the immune system. The mechanisms behind these actions are unclear but the chemical allicin, which is responsible for the aroma of fresh garlic, may be the active agent.

There is a dearth of quality scientific evidence about the effect of garlic on colds. The recent Cochrane systematic review which set out to answer this question could find only one study suitable for analysis.

Participants who took a garlic capsule (with a standardised dose of allicin powder) daily for three months reported fewer days of illness from colds than those who took a placebo. But they were more likely to suffer from side effects such as skin rash, and body odour.

These results may appear promising but need to be approached cautiously until replicated. It’s always possible there are biases in a single study – for instance, the study author appears to sell medicinal garlic products.

The lack of quality evidence precludes a recommendation for using garlic supplements for the common cold. But, of course, people who like eating garlic should continue to do so.

Vitamin C is commonly found in fresh fruits and vegetables and is one of the most common supplements taken by Australians. The use of vitamin C for the common cold became popular in the 1970s, following its promotion by American chemist Linus Pauling who believed it had many health benefits.

There is good study data on the effect that vitamin C has on the common cold: for the most part, it isn’t effective.

Taking vitamin C daily as a preventative has no effect on the likelihood of getting a cold in the general community. It might have a small effect on the severity of symptoms, and on the duration of illness (about a half day for a usual cold).

But taking vitamin C as treatment (taking a dose after you get a cold) does not have an effect on the duration or severity of symptoms.

This same data found that vitamin C can be beneficial for people undergoing heavy acute physical stress, such as marathon runners and alpine skiers. But this is an unusual and specific context and the results can’t be generalised for regular community settings.

This mineral is an essential nutrient and is found in both plant and animal sources. Foods that are particularly rich in zinc include oysters, sun-dried tomatoes, beef and various seeds (including pumpkin, sunflower, sesame, and pine nuts). Oral zinc is widely available in a number of different formulations.

Interestingly, oral zinc does appear to have a beneficial effect for the common cold, but with a number of major caveats.

When taken as a treatment at the onset of the cold, zinc appears to reduce the duration of a cold, but only at higher doses (more than 75 milligrams a day). Zinc might be more effective in adults than in children, and when taken as lozenges, particularly in the zinc acetate form.

There is little data on using zinc as a regular preventative, and you might not want to because it comes with a number of unpleasant side effects, such as nausea and bad taste.

It’s important to note that the results vary between studies and there is some evidence of publication bias. So it may be that the estimate of the effectiveness of zinc for the common cold is exaggerated.

When we step back, it isn’t really that surprising that nothing really works, or works that well for preventing or treating colds. Given how common it is, any truly effective therapy would be a massive commercial blockbuster and hardly a secret.

Michael Tam is a general practitioner and consults with patients who suffer from the common cold. He otherwise does not work for, consult to, own shares in or receive funding from any company or organisation that would benefit from this article, and has no relevant affiliations.