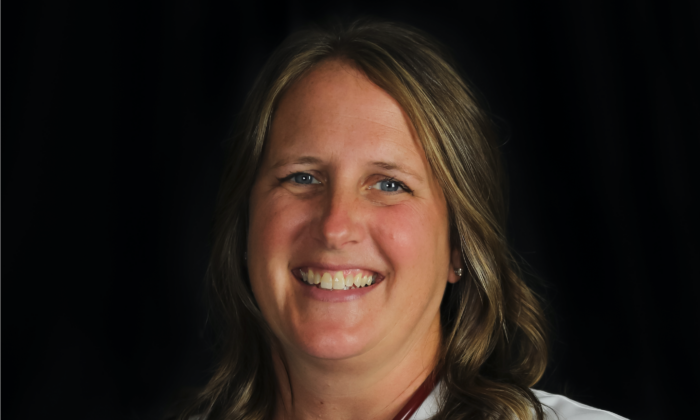 Valerie Kloosterman, 42, was fired from her health care job at a Michigan clinic in 2021 after she raised religious objections to transgender pronoun use and gender-altering medical procedures, photographed on Sept. 30, 2022. (Photo Courtesy of First Liberty Institute)
By Janice Hisle

Shortly thereafter, Kloosterman’s employer fired her, despite her unblemished 17-year record of conscientious patient care at a clinic.

Kloosterman’s attorneys are asking the University of Michigan Health-West (UMH-West) to reinstate her, grant her a religious accommodation, and spare others from “similar discrimination.”

Kloosterman, a 42-year-old married mother of four (including triplets), was dismissed more than a year ago. She turned to First Liberty in a last-ditch effort to get her job back, according to Jordan Pratt, senior counsel at the firm’s office in Washington.

Kloosterman’s attorneys accuse UMH-West of violating her rights to freedom of speech, religious expression, and nondiscrimination in employment, as guaranteed by state and federal law.

The firm sent the letter to UMH-West in an attempt to avoid legal action but stands ready to proceed, Pratt said. Kloosterman’s former employer has asked for more time to draft a detailed response to the 11-page letter.

Chris Zoladz, head of public relations and communications for UMH-West, wrote in an emailed statement to The Epoch Times on Oct. 4: “University of Michigan Health-West is committed to providing appropriate medical treatment to all patients and respects the religious beliefs of its employees. Our organization does not discuss personnel issues and as such, has no further comment.”

The job loss hit Kloosterman especially hard because her career path followed those of her mother and grandmother; all three women worked in health care at the same location, Caledonia Health Center, a clinic south of Grand Rapids.

“She’s a third-generation health care worker, and, in every sense of the word, an exemplary physician assistant,” Pratt told The Epoch Times on Oct. 3.

He noted that Kloosterman and her husband have deep connections to Caledonia; they both grew up there and have been lifelong residents. The clinic is located in a community steeped in rural values that often conflict with big-city attitudes.

Issues culminating in Kloosterman’s dismissal arose between May and June 2021, when her employer required her to complete a training module about sexual orientation and gender identity. Because of Kloosterman’s religious beliefs, she was unable to honestly “check the boxes” that affirmed the statements, the letter said.

Kloosterman decided to disclose her dilemma to a UMH-West official and “to seek a reasonable accommodation for her religious beliefs,” her lawyers wrote.

Someone with less integrity might have kept those personal beliefs secret and quietly complied with checking the boxes, Pratt said. No one might have ever known how she really felt.

But Kloosterman “did not hide who she is,” Pratt said. “What an example of character and honesty.”

Kloosterman’s disclosures revealed “her authentic self,” Pratt said. Such expression is often celebrated in diversity and inclusion programs. Yet, in an ironic twist, Kloosterman was fired because her beliefs differed from the prescribed views of UMH-West’s diversity program.

As a longtime member of a United Reformed Church, Kloosterman believes that God created humans as males and females, and no one should “attempt to erase or alter his or her sex,” her lawyers wrote.

Kloosterman also believes she must speak and act in accordance with her religious beliefs. Therefore, she cannot use “pronouns that contradict a person’s biological sex.”

During her tenure at the clinic offering internal, family, and pediatric care, Kloosterman encountered just two patients who seemed to prefer pronouns differing from their biological sex; Kloosterman simply referred to those patients by their names and avoided pronouns, thus respecting their wishes without compromising her beliefs.

Kloosterman’s lawyers cite a 2021 federal court finding that “public colleges and universities violate the First Amendment when they coerce their employees to use sex-obscuring pronouns” in jobs requiring freedom of expression.

Further, the attorneys say, no patient had ever asked Kloosterman to provide the types of medical treatments that she opposes. Her role at the clinic was unlikely to put her in contact with people seeking such treatments. Even if that were to happen, Pratt said, UMH-West could easily accommodate Kloosterman’s religious beliefs.

UMH-West has done so for other employees for nonreligious reasons, he said. For example, a male employee exempted himself from doing female pelvic exams, and one professional was permitted to tell patients that he’s opposed to prescribing opioids.

Kloosterman’s objections go beyond her religious beliefs. She took an oath to follow her own “independent medical judgment,” with which the employer has no right to interfere, according to her employment contract, her lawyers said.

As a medical professional, Kloosterman believes that hormone therapy and gender-reassignment surgeries are “experimental,” lack validation in long-term studies, and carry risks of numerous side effects and complications, her lawyers wrote.

In addition, using pronouns that “obscure or misrepresent a person’s sex” in a medical setting can result in patients missing sex-specific screenings such as mammograms and testicular exams, the letter said.

After raising her religious concerns, Kloosterman met with UMH-West leaders twice in July 2021; at one of those meetings, a UMH-West official grew “hostile” toward Kloosterman, “visibly angry with tight fists and a flushed demeanor,” her attorneys wrote. That official told Kloostermann “she could not take the Bible or her religious beliefs to work with her, literally or figuratively.” In addition, he  said “she was to blame for transgender suicides, and that she was ‘evil,’ and abusing her power as a health care provider,” her lawyers wrote.

She was fired about a month after the final meeting. Later, UMH-West wrote a letter stating that her gender-identity beliefs got her fired. Her former employer also alleged that Kloosterman altered medical records to change patients’ pronouns, a charge that Kloosterman continues to deny. Her lawyers wrote that Kloosterman “did not even have the ability to change” records, as a patient’s gender is pre-filled such medical forms, they say.

“Only office staff had that ability,” the lawyers wrote.

Kloosterman believes that UMH-West staff made it clear that her religious beliefs put her in the crosshairs and led to her termination.

The hospital’s diversity, equity, and inclusion webpage also says that “diversity is not reserved for specific groups.”

UMH-West “has earned national recognition for a commitment to equity and inclusion for lesbian, gay, bisexual, transgender and queer patients, families and employees,” its website says, citing a top rating from the Human Rights Campaign.

Employee training is a major factor in that ranking.