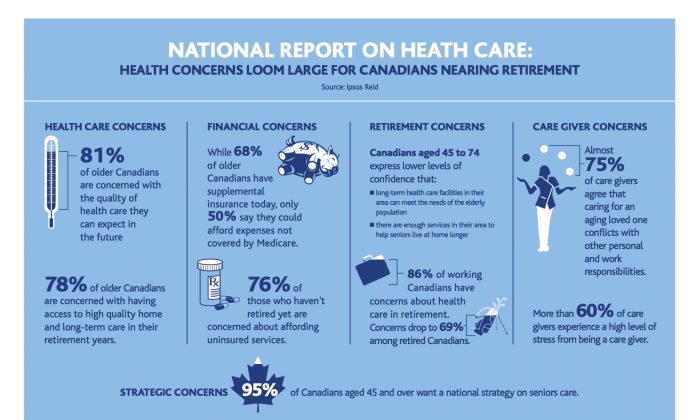 A great majority of Canada’s baby boomers are concerned with the level of health care and access to long-term care they can expect as they approach retirement, according to a new report by the Canadian Medical Association.

Based on a survey by Ipsos Reid, the CMA’s 14th annual National Report Card on Health Care shows a similar trend seen in its previous reports, with baby boomers increasingly concerned about the outlook of health care as they age.

About 81 percent of Canadians aged 45 and older say they worry about the quality of health care they can expect in retirement, while 78 percent are not confident they will have adequate access to home and long-term care.

Of the total Canadian population, over half are not confident that hospitals and long-term care facilities can handle the needs of the elderly. This lack of confidence is lowest among those 75 years and older—the population currently receiving these services.

“We are seeing more of a concern from younger populations caring for their elderly family members and from those about to enter retirement,” said CMA president Dr. Louis Hugo Francescutti.

The survey found that more than a quarter of Canadians provide care for an aging relative or friend, and over three quarters of those caring for the elderly say it conflicts with other personal and work responsibilities.

“An aging population living longer with more chronic illnesses will affect all of us,” Dr. Francescutti said.

The proportion of seniors among the Canadian population is growing fast, with those aged 65 and older accounting for 15 percent of the population today. That figure, which was only 8 percent in 1971, is expected to account for a quarter of the total population by the time all baby boomers reach 65.

According to the CMA, under a national strategy elderly patients could be cared for at home or in long-term care facilities, which would alleviate chronic hospital bed shortages. It estimates that one day of care for a patient in a hospital costs $1000, while one day spent in a long-term care facility costs about $130 and home care costs $55.

“We should not accept that a country as prosperous as Canada has such a large portion of its population living in fear for the future as they age,” said Dr. Francescutti.

“We need to take immediate action to tackle this issue and job one must be to get a seniors care strategy on each political platform as we approach the 2015 federal election.”