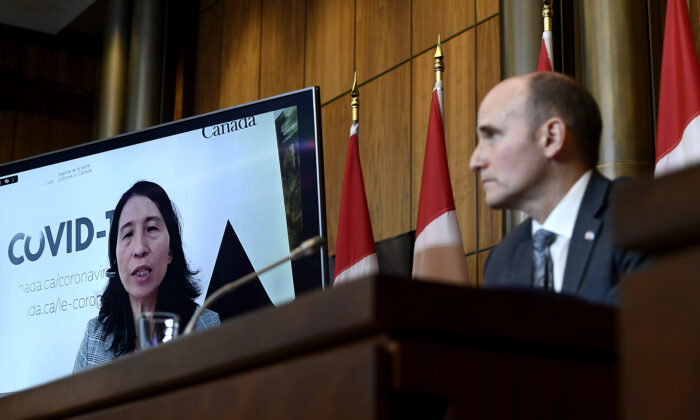 The federal government bureaucrat who wrote the policy that prevented unvaccinated Canadians from flying or travelling by train said she has no recollection of health officials recommending a vaccine mandate for travel, according to court documents.

Jennifer Little, director general of the COVID Recovery Team at Transport Canada, made the comments on June 9 and 10 while being cross-examined under oath in federal court as a government witness in support of the mandate.

“I don’t recall a direct recommendation,” Little answered on June 9 when asked if she was aware whether the Public Health Agency of Canada (PHAC) or its parent department, Health Canada, had recommended a mandatory vaccination policy for travellers.

“Certainly, we worked very closely with them in preparing the policy, which was supported by the government. So in terms of a written recommendation, for example, no,” she said. “But as part of the policy-making process and the decision-making supporting process, certainly … we were working very closely with our health colleagues.”

The court proceedings relate to lawsuits challenging the federal vaccine mandate for travel, which was in place for nine months and was suspended on June 20. The unvaccinated can now travel by plane, train, and some marine vessels, but international travellers coming to Canada must still be vaccinated while unvaccinated Canadians need to quarantine upon re-entering the country.

One of the lawsuits was launched by businessmen Karl Harrison and Shaun Rickard. Former Newfoundland premier Brian Peckford with co-applicants and PPC Leader Maxime Bernier also each have a lawsuit. The fourth lawsuit was filed by Quebec lawyer Nabil Belkacem, who is representing himself.

Little said she and her team began working on the policy in late July after the government decided to impose a mandate, which it announced on Aug. 13.

On June 10, Little was again asked if there had been a recommendation from PHAC or Health Canada, and whether she had any “emails, briefs, or reports” from these organizations that recommended mandatory vaccination in travel.

Little said she and her team of just under 20 do not have any scientific background, noting that she uncritically accepted whatever data and information PHAC provided.

“It’s not my responsibility to question or analyze the data that the experts on public health in this country provide me,” she said.

The government suspended the vaccine mandates on June 20 with the caveat they could be brought back at any time according to the situation.

Because of the suspension, the government is seeking to have the lawsuits declared moot, but the applicants want the issue heard by a judge to address potential charter rights violations.

The Liberals presented the idea of mandatory vaccination in the summer of 2021 and it became a proposed policy which they campaigned on in the fall election.

After being elected, the Liberals imposed mandates on the public service and federally regulated sectors, as well as on travel by air, train, and some marine vessels.

The mandates have been systematically defended by Prime Minister Justin Trudeau and his ministers as guided by science or as following the advice of public health experts.

The court also heard from Dr. Eleni Galanis, director general of the Centre for Integrated Risk Assessment (CIRA) within PHAC. The unit has a mission to detect, anticipate, and evaluate public health risks and support decision-making for risk management.

She started in her role in December 2021 and joined a group advising Dr. Theresa Tam, the country’s chief public health officer, on a weekly basis

Galanis was asked in cross-examination on June 23 what was said about vaccine mandates during those meetings.

“It usually is around what the decisions have been and … when things are planning to be changed,” she said.

“So Dr. Tam would inform us that the decision has been made to do this, or if she’s in preparation for meetings … where the lifting of these will be discussed and asks us for supporting information if required.”

Galanis was asked if she knew why the vaccine mandates were lifted a few days before her cross-examination.

“Not specifically, no,” she said.

Galanis said the lifting of the mandates was discussed with Dr. Tam’s advisory group, “but not recently,” suggesting the decision had been made much earlier than the June 14 announcement.

Galanis said Tam didn’t really provide the group a rationale for removing the vaccine mandates. She also said neither Tam, her advisory group, nor CIRA ever debated or discussed the merits of the travel mandate.

“We talked generally about—I don’t remember specifically about the vaccine mandate but about the border measures generally and the plan to lift the measures or decrease intensity of the measures throughout the later part of the winter as driven by this early transition phase that we’re in,” she said.

She defined this transition as being due to a decrease of the Omicron wave along with high vaccination and natural immunity rates.

If the issue of the mandate itself was not high on the agenda, it appeared that what the mandate was supposed to address—the risk of transmission of the SARS-CoV-2 virus in modes of transportation—wasn’t either.

Galanis said that issue was “rarely” discussed during meetings and that she couldn’t remember if Tam or the group ever discussed transmissibility in travel since she joined in December 2021.

Also testifying in court was epidemiologist Dr. Lisa Waddell of the Emerging Sciences Group at PHAC, which is in charge of reviewing the COVID-19 scientific literature being published on a regular basis and to summarize it for the consumption of interested government personnel.

Waddell, whose team reviewed the scientific literature on the issue of in-flight transmission, confirmed during cross-examination on May 31 that the latest PHAC brief on that topic was produced on Nov. 25, 2021.

Lawyer Keith Wilson, who represents Peckford and his co-applicants in the action, questioned Waddell on that brief.

“Do you agree with me that requiring Canadians to be vaccinated to fly is not one of the identified strategies, correct?” Wilson asked.

“There wasn’t a lot of evidence on that so, as a strategy as a whole, it has not been evaluated in the literature and therefore is not elaborated in the review,” Waddell answered.

When Wilson asked if the PHAC brief recommended vaccination as a requirement to travel by air, Waddell said it did not.

The Epoch Times reported previously that the Health Canada official who has the final say on authorizing COVID-19 vaccines in Canada wasn’t consulted on imposing the mandates, according to court testimony.

Celia Lourenco, director general of the Biologic and Radiopharmaceutical Drugs Directorate within Health Canada’s Health Products and Food Branch which gives the final say on approving vaccines, said in early June that she never advised, nor was she consulted on, the issue of mandating the injections for travel or working in the public service and federally regulated sectors.

She also testified that vaccines must provide a 50 percent rate of protection against infection to be authorized.

Lourenco acknowledged the waning effectiveness of current two-dose mRNA vaccines, which provide very little protection after 12 weeks according to charts prepared by PHAC that were presented in court, and said the vaccines would not be authorized had they shown such figures during initial trials.

But Lourenco said the vaccines remain in circulation because they provide protection against severe outcomes, although she could not provide a numerical threshold.

“In the post-market, of course we’re concerned still about effectiveness against infection, but if a vaccine is showing waning protection against infection, what we look for is does it still protect against severe disease? And if it does, then that supports our analysis in terms of the benefits continuing to outweigh the risks of the vaccine,” she said.

The Epoch Times contacted Health Canada to find out if any individual, agency, or group within the department ever recommended that the government impose, keep in place, or remove the vaccine mandates.

Without addressing the question directly, an unidentified spokesperson pointed to the government departments behind the decision.

“You should note that the ‘COVID-19 vaccination requirement for federal public servants’ was issued by the Treasury Board of Canada,” the spokesperson said in an email.

“Also: ‘Mandatory COVID-19 vaccination requirements for federally regulated transportation employees and travellers’ was issued by Transport Canada,” the spokesperson said, while providing links to the policies.