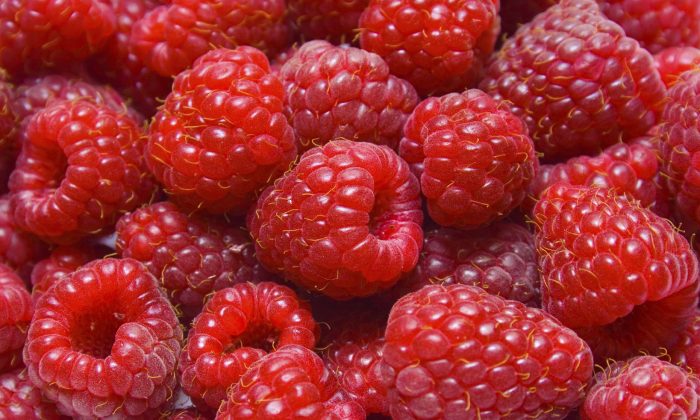 Anti-cancer benefits of raspberries have long been attributed to their antioxidant and anti-inflammatory phytonutrients – the number unequaled in other fruits. Ellagitannins, for instance, may have the power to switch signals sent to potential cancer cells, keeping them benign, and curtail the number of those in existence by sending signals that encourage cell death (scientists call it apoptosis).

Ellagic acid is another, discouraging diseases associated with oxidative stress and inflammation, such as obesity, diabetes, hypertension, and atherosclerosis. Phenolic flavonoids like quercetin, gallic acid, cyanidins, pelargonidins, catechins, kaempferol, and salicylic acid are among the most prominent in raspberries.

Vitamin C, a powerful natural antioxidant that zaps free radicals and fights infection, is one of the biggest benefits in raspberries, with a 54 percent value per serving. In fact, the oxygen radical absorbance capacity (ORAC) value is one of the highest of all fruits – 4,900 per 100 grams. Manganese, too, is present in raspberries, with a 41 percent daily value, boosting the enzyme superoxide dismutase. Potassium helps control heart rate and blood pressure, the copper content is essential for red blood cell production, and the vitamin A, E, and K levels also are certainly worth mentioning.

Rheosmin, a phytonutrient often called raspberry ketone, is being buzzed about regarding its high fat-burning capabilities. Scientists agree it may be a factor in decreasing obesity as well as fatty liver risks.

Raspberries contain oxalates (present in many plants) – much more in black than in red varieties – which scientists say might discourage a large black raspberry intake. The problem is that oxalates link with calcium and may crystallize, causing pain and inflammation. They may also inhibit mineral and protein uptake while admitting harmful substances like gluten and food allergens.

However, consume raspberries in moderation because they contain fructose, which may be harmful to your health in excessive amounts.

Scientists found the makeup of raspberry ketone, the fragrance compound in red raspberries, to contain properties similar to those of capsaicin and synephrine. Further studies showed that these compounds have the potential to alter lipid metabolism, both preventing and improving obesity and fatty liver.

Black raspberry extracts (RSE) were found to slow the growth and even kill breast cancer cells, and help protect against radiation.

Stomach, prostate, intestine, and breast cancer cells were shown to be inhibited when patients were tested with an array of different berry juices, including raspberry, black currant, white currant, gooseberry, velvet leaf blueberry, low-bush blueberry, and other lesser-known berry types. While some berries had little or no effect on cancer cells, researchers concluded that including berry juices in the diet might prove chemopreventive.

The diversity of phytonutrients in raspberries is unequaled in other fruits. That’s good, because while each by itself plays an important part in keeping the body healthy, together they pack an even bigger punch. Cancer prevention is one advantage, but raspberries can also slow and even halt the progression of obesity, diabetes, hypertension, and atherosclerosis. The wonderful part is that with all these health benefits, you can rest assure that desserts and salad with raspberries thrown in can be as good for you as just plain good.