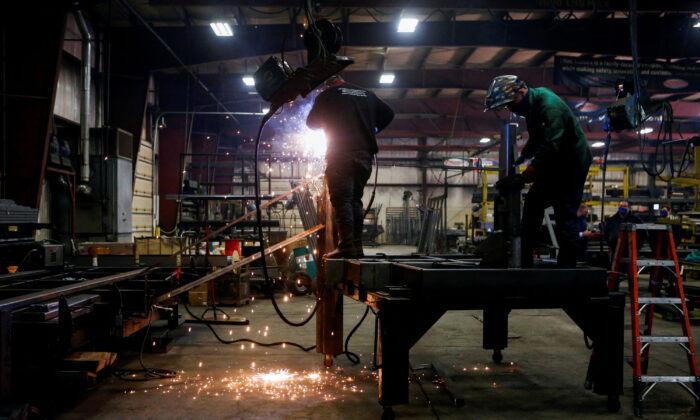 Headwinds Hit US Manufacturing as Demand Cools, While New Orders and Employment Drop

U.S. manufacturing activity fell in June, but more than expected, as new orders contracted for the first time in two years, according to a survey from the Institute for Supply Management (ISM).

ISM’s manufacturing figures dropped to 53.0 in June from 56.1 in May, the weakest results since June 2020, but the ISM index is well above the 43.1 level that would signal a recession.

American manufacturing, which accounts for 11.8 percent of the U.S. economy, is currently doing better in comparison to the industries in Europe and Asia.

Manufacturing production slowed down last month, after continued growth in consumer spending through May.

The slowdown in production is partially reflected in a shift in consumer spending from goods to services in the second quarter.

Meanwhile, the S&P’s Global U.S. Manufacturing PMI index on July 1 showed output rose to 52.7 in June, but it is still below the 57 percent from April.

The PMI survey results are being blamed on “near-stagnation of factory output and a fall in new orders.”

However, PMI reported that a reduction in new orders, combined with a sustained rise in employment, allowed for more companies to clear out previous work backlogs.

Lower demand for goods may actually help to cool inflation, but it could be offset by higher prices for services.

Many companies have been trying to adapt their current orders to consumer demand after dealing with a glut of orders during the height of the supply chain crisis.

Major retailers like Walmart and Target are reporting an excess of merchandise, while business inventories in general reported an increase in the first quarter.

Manufacturing jobs, meanwhile, fell for a second straight month to 47.3 in June from 49.6 in May, according to the PMI survey, likely due to a combination of lessening demand and labor shortages.

The ISM’s employment index fell below 50 in June, reaching contraction levels, an ominous sign that there will be a rise in unemployment and not just a hiring slowdown.

However, most companies still appear to be hiring, while first-time jobless claims remain at historically low records.

There were 11.4 million job vacancies at the end of April, while the drop in factory employment does not appear to be a sign that overall payroll growth was declining.

The PMI index also saw a decrease in sales, the first time since May 2020, with demand from domestic and foreign buyers taking a hit.

The survey stated that inflationary pressures, combined with weak client confidence and supply-chain disruptions, led to the drop in production capacity.

The PMI measure of manufacturer expenses dropped to 78.5 in June from 82.2 in May, but input and output costs continued to rise substantially after an increase in supplier prices.

Companies surveyed replied that the rise in material, fuel, and transportation costs was a major factor in the increase in operating expenses, which they are pushing on to the consumer.

“Forward-looking indicators such as business expectations, new order inflows, backlogs of work and purchasing of inputs have all deteriorated markedly to suggest an increased risk of an industrial downturn,” said Chris Williamson, chief business economist at S&P Global Market Intelligence.

“Demand growth is cooling from households amid the cost-of-living crisis, and capital spending by companies is also showing signs of moderating due to tightening financial conditions and the gloomier outlook. However, most marked has been a steep drop in orders for inputs by manufacturers, which hints at an inventory correction.”

The PMI index’s measure of supplier deliveries tumbled to 57.3 in June from 65.7 in May.

In June, average supplier delivery times fell to their lowest levels since November 2020, a sign of easing in the supply chain delays caused by the pandemic.

“Some welcome news is that the drop in demand for inputs has brought some pressure off supply chains and calmed prices for a wide variety of goods, which should help alleviate broader inflationary pressures in coming months,” Williamson concluded.

Both surveys are still comfortably above the 50 mark, which means that the economy is still managing to roll along.

This aligns with a sign that the economy is beginning to cool amid aggressive tightening monetary policy by the Federal Reserve, which is stoking fears of a pending recession.

GDP has fallen at a 1.6 percent rate in the first quarter and there are signs that it will fall again in the second.

The central bank, since March, has increased its benchmark overnight interest rate by 150 basis points, with another hike expected in July.

Many investors are now expecting the Fed to eventually cut rates sometime next year, as interest rates begin to slow the economy into dangerous territory.

Combined with a weakened real estate sector and a reduction in factory production, some economists believe that the economy will contract in the second quarter following the slump in GDP in the first quarter of the year.

A second consecutive monthly drop in GDP would only indicate a recession if the economy suffers a major rise in unemployment.

Recession fears were worsened by a separate report from the Commerce Department on July 1, that showed construction spending falling by 0.1 percent in May.