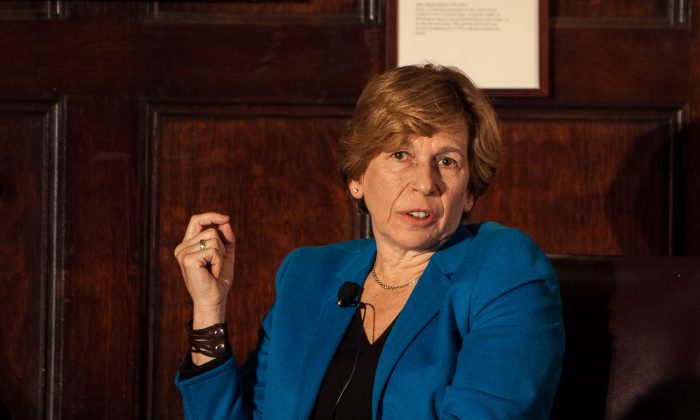 NEW YORK—Two heavyweights in the education field discussed the Common Core curriculum testing, as well its connection to teacher evaluations, during the Teaching Matters annual luncheon, held at the Harvard Club in Manhattan on Oct. 23.

John King Jr., the state’s education commissioner, expressed resolve to push forward with the federal-issued Common Core curriculum, along with teacher evaluations, and “make adjustments along the way.”

Randi Weingarten, president of American Federation of Teachers, also expressed support for the Common Core, along with the teacher evaluations, diverging only on one point.

“The testing, right now, is not ready for prime time,” she said.

Weingarten proposed delaying the use of Common Core for assessing teachers, schools, and students, while the adjustments are made.

The debate, moderated by Columbia University professor Jeffrey Henig, veered even closer to consensus, with King using consoling language on the issue of test-based decisions.

“I don’t think assessments alone should be the basis for decisions about students or decisions about educator effectiveness,” he said, adding that the performance on Common Core tests is a “factor worth considering.”

In practice however, the local criteria are bound to such complex standards, that schools are deciding to base up to 40 percent of a teacher’s evaluation on state tests.

Weingarten said that adjustments should happen both in schools and at the state level.