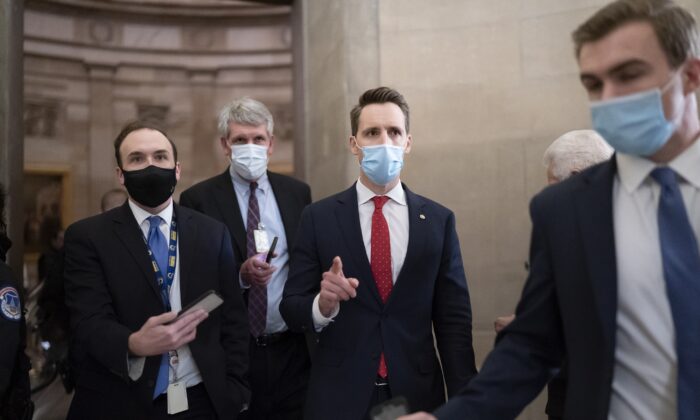 Sen. Josh Hawley (R-Mo.) said Thursday he plans to sue Simon & Schuster after the publishing company canceled a contract for his book.

Calling the people behind the cancellation a “woke mob,” Hawley said the move “could not be more Orwellian.”

Simon & Schuster is axing the contract “because I was representing my constituents, leading a debate on the Senate floor on voter integrity, which they have now decided to redefine as sedition,” Hawley said in a statement.

“Let me be clear, this is not just a contract dispute. It’s a direct assault on the First Amendment. Only approved speech can now be published. This is the Left looking to cancel everyone they don’t approve of. I will fight this cancel culture with everything I have. We’ll see you in court.”

Simon & Schuster said earlier in the day that Hawley’s decision to object to electoral votes during the Jan. 6 joint session of Congress motivated the cancellation.

“We did not come to this decision lightly,” the New York-based company said in a statement. “As a publisher it will always be our mission to amplify a variety of voices and viewpoints: At the same time we take seriously our larger public responsibility as citizens, and cannot support Senator Hawley after his role in what became a dangerous threat.”

After Hawley announced the pending litigation, Simon & Schuster said it was confident the cancellation of the contract was legal.

Hawley, abiding by federal law, objected to electoral votes from Arizona and Pennsylvania, pointing to alleged and proven election irregularities and moves from officials to change election processes in contravention to state Constitutions.

In Pennsylvania, even apart from fraud allegations, “you have a state Constitution that has been interpreted for over a century to say that there is no mail-in balloting permitted except for in very narrow circumstances that’s also provided for in the law, and yet, last year, Pennsylvania elected officials passed a whole new law that allows universal mail-in balloting and did it irregardless of what the Pennsylvania constitution said,” Hawley said on the Senate floor, explaining why he objected to the state’s votes.

“And then when a Pennsylvania citizen tried to go and be heard on this subject before the Pennsylvania Supreme Court, they were dismissed on grounds of procedure, timeliness, and violation of that Supreme Court’s own precedent. So the merits of the case have never been heard, the constitutionality of the statute actually has never been defended. I am not aware of any court that has passed on its constitutionality. I actually am not aware of anybody who has defended the constitutionality. This is the statute that governed this last election in which there were over 2.5 million mail-in ballots in Pennsylvania,” Hawley added.

“This is my point, that this is the forum. The Pennsylvania Supreme Court hasn’t heard the case. There is no other court to go to to hear the case in the state. And so this is the appropriate place for these concerns to be raised, which is why I have raised them here today.”

Democrats and some Republicans tried blaming Hawley and other legislators who objected to electoral votes for the storming of the U.S. Capitol, which led to a delay of hours in the joint session and resulted in several people dying, including a woman who was shot by the U.S. Capitol Police.

Hawley thanked that agency, along with other law enforcement agencies, who helped respond to the Capitol breach and said he opposed violence.

“There is no place for that in the United States of America. And that’s why I submit to my colleagues that what we are doing here tonight is actually very important, because for those who have concerns about the integrity of our elections, those who have concerns about what happened in November, this is the appropriate means, this is the lawful place where those objections and concerns should be heard,” he said.