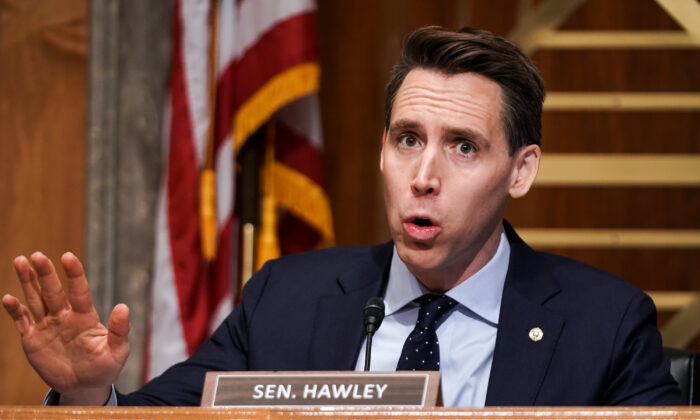 Hawley Doubles Down on Objecting to Electoral Results, Pushes Back on Pressure From McConnell: Report

Hawley put out a statement Thursday afternoon in which he reiterated the reasons for why he is choosing to object to the electoral vote count on Jan. 6.

“I was unable to join this morning’s call, but I understand the Leader gave me the opportunity to share my concerns regarding the upcoming Joint Session,” Hawley said in a written statement, in response to McConnell, Axios reported.

According to the report, McConnell held a conference call with Senate Republicans on Thursday morning in which he questioned Hawley multiple times about his intent for the Jan. 6 joint session of Congress. However, McConnell got no reply as Hawley was not on the call.

Hawley’s office did not respond to The Epoch Times’ request for comment.

Thursday morning, Hawley became the first senator to commit to objecting to contested electoral college votes on Jan. 6, 2021, prompting criticism from both sides of the aisle. He will join a growing number of Republican lawmakers like Rep. Mo Brooks (R-Ala.) who will file an objection in the House.

The senator said that his constituents are “deeply angry and disillusioned,” and are frustrated that Congress has not taken any meaningful action to investigate the voter fraud claims, with the exception of Sen. Ron Johnson (R-Wis.) who held a Senate hearing on election irregularities earlier this month.

“I intend to object during the certification process on January 6 in order to force these issues to the fore, and to point out the unprecedented failure of states like Pennsylvania to follow their own election laws and the unprecedented efforts of the Big Tech corporations to interfere with this election,” Hawley added.

Congress convenes on Jan. 6 to count electoral votes, the final step to certifying a president-elect under the Electoral College system. Electors gathered on Dec. 14 to cast ballots for the presidential candidate that won the most votes in their states, submitting certificates of ascertainment to Washington. In seven states, alternate slates of electors cast ballots for President Donald Trump, even though the vote count showed that Democratic presidential nominee Joe Biden was ahead.

Republicans have been considering ways to contest the election results, which may end up swinging the outcome in favor of Trump if the claims of fraud are allowed to be investigated and shown to be true. One way forward following Hawley’s announcement is objecting to electoral votes in crucial swing states where allegations of fraud have emerged like Pennsylvania and Georgia.