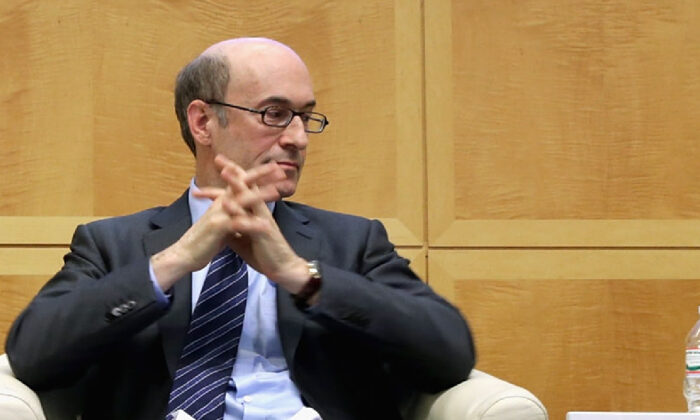 Harvard Economist Claims US Economy on ‘Knife-Edge,’ but Fed Maintains Inflation Is Temporary

A Harvard economist has said that the high rate of inflation currently plaguing the United States has positioned the economy on a “knife edge,” and it’s difficult to see how the Fed’s indecisive wait-and-see stance will bring it back on track.

Kenneth Rogoff said on Fox Business’s “Mornings with Maria” that the recovery is “still pretty good, but we certainly have inflation which is almost eye-popping, over 6 percent.” While the core inflation is lower, he said, these are “stunning numbers from just a few years ago.”

The Fed, meanwhile, claims that the inflation is temporary, but Rogoff said that if the Fed sticks to its plan, “there’s a 50–50 chance or a little less, that they prove right,” and the inflation won’t last long, but “there’s a fair chance in two or three years we’re still talking about 3 and 4 [percent] inflation and it’s going to be even more painful to bring down.”

While the White House maintains that the Biden administration’s Build Back Better plan will cost nothing, the Congressional Budget Office has estimated that it will add $367 billion to the federal deficit over the next decade.

Host Maria Bartiromo asked whether “another $5 trillion in spending, because that’s what it is, when you actually take out these fake sunsets, will that stoke inflation further?”

Rogoff replied, “I think it’s pretty clear that the first stimulus right after Biden took office and maybe the one at the end of the year in 2020 were a little too late in the game.”

According to Rogoff, the stimulus has added to the inflation. This bill is expected to remake the government, and will have “an effect on productivity investment,” he said.

The U.S. economy has not seen price increases like this in three decades, and the economist believes that the current administration is on its “back heels.” He said inflation needs to be dealt with a proactive approach. President Joe Biden is soon going to choose the next Fed chair and the outgoing Chairman Jerome Powell might raise interest rates before he leaves office, added Rogoff.

The supply chain crisis has added to the woes, especially as Americans head into the holidays. Shortages of products have resulted in fewer deals and promotions and high prices.

In March, Treasury Secretary Janet Yellen told MSNBC that inflation concerns, particularly those related to the Build Back Better program, were misplaced. Regarding inflation, “I really don’t think that is going to happen,” she said.

In June, Yellen appeared before the Financial Services and General Government Appropriations subcommittee and predicted that the increasing prices would subside by the end of the year. Five months later, she said that prices would fall by the 2022 midterm elections.

Powell said during a news conference in spring that injecting trillions into the economy would not trigger inflation. “We do not seek inflation that substantially exceeds 2 percent, nor do we seek inflation above 2 percent for a prolonged period,” he wrote in an April 8 letter to Sen. Rick Scott (R-Fla.).