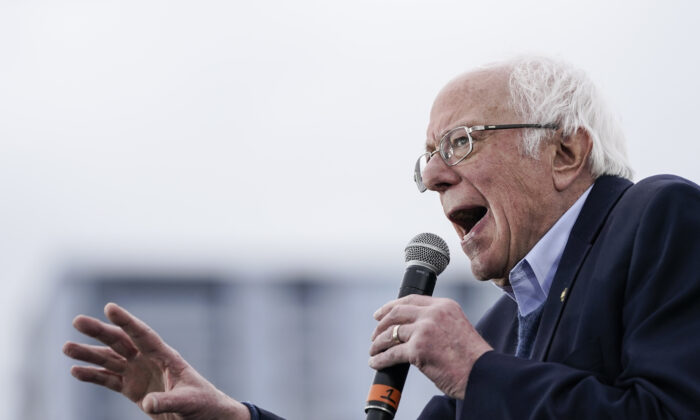 Hangin’ With the ‘Bernie Bros’ on Nevada Victory Night

LAS VEGAS—I had a theory about the “Bernie Bros”—about their motivations, who they were deep down—so I set out to meet as many of them as I could at Bernie Sanders’s Nevada caucus returns “watch party.”

It was held at a grunge-type bar in the Las Vegas Arts District, a hipster redoubt not all that far from the Strip.

I figured the Bros would be in a good mood and willing to talk because it was already a victory celebration, Sanders having romped in the state.

I was right. Loud, gleeful chants of “Bernie! Bernie! Bernie!” burst out spontaneously every few minutes in the jam-packed bar when I was there, as if the Bros were trying to reach the ears of their candidate, who was already campaigning in Texas, while at the same time, laying down their rejoinder to the Trump fans and their cries of “USA! USA! USA!”

Maybe the Bros should have been shouting “Vegas be gone!” because, as I asked a spokeswoman for the locally powerful Culinary Workers Union at a press gaggle earlier that day, if America went socialist, would there still be a Las Vegas? (A devout Bernie supporter, she pretended not to hear my question, looking around nervously for someone else to answer.)

But back to the Bernie Bros and my theory—such as it is. I think their rise and abject devotion to Sanders is closely related to the diminished and problematic role of young males in our society that has been written about so eloquently by Dr. Helen Smith, among others.

Our boys have some serious problems—drugs, school dropouts, a disturbing suicide rate. Many are lost, devoid of prospects and ambition. (Females already outnumber males in our colleges, 60–40. No one but the most extreme feminist should feel sanguine about where that will lead.)

Bernie has become something of a father figure to these young men, many of whom never had one. Others that did had ones that we could call questionable role models.

In and outside the bar, both of these generations were in evidence—the younger ones dressed in replication of the older (with minor variations) who seemed to be in the same clothes they wore to a love-in back in 1968.

I had seen the same generations together before at a Sanders rally I attended in Des Moines, Iowa, during the 2016 election. The candidate’s speech then, much the same as the one he gives now, was also identical in rhetoric, if not in style, to what one heard from Tom Hayden or Mario Savio back in the 60s.

There’s nothing so old as the avant-garde, as they say. But it was all new to those kids then and these kids now.

Inside the bar that night, it was easy to meet them. I felt in bad faith, playing the role of a Bernie supporter, although that was certainly easy, if you remembered to keep the buzzwords relatively contemporary.

The first guy I spoke was older than most, in his mid-30s, I would guess, and had, he admitted almost proudly, a checkered work career, living in several cities and holding a variety of jobs before he settled in Las Vegas. Now, he’s a Bernie-guy all the way; no other candidate was worth anything. Health care was the reason, he said. He had seen too many friends die from lack of care, others from overdoses. He was very concerned about the opioid crisis.

For a moment, he looked grim despite the festive atmosphere. I asked him if things could get violent if Bernie lost. He wasn’t sure. There was something ominous in his equivocation.

The strange thing was his occupation—he designs slot machines. He was in the right town for that, he added with satisfied smile. I had visions of all the poor suckers pouring their paychecks into his inventions. I wondered if he sensed the irony, but resisted asking. In Bernieland, there was too much irony to go around.

Outside on the bar’s patio, the Bros were of a more pleasant sort, passing the inevitable joint. Among them was a guy who wore an official Sanders “observer” button. That meant the campaign sent him to Vegas to observe one of the precincts.

I asked if he was going on to South Carolina for the primary. He shook his head and said he wished he could, but he had to go back to Seattle for his work. He was a substitute elementary school teacher, a job he liked, he explained between tokes, because it gave him a lot of time off.

I didn’t get what the others in the smoking group outside did, if anything; employed or not, they seemed nice enough, laughing and sharing and praising the nirvana to come under Bernie. They made me sad, and I said my good-byes, leaving before I really wanted to.

Like most “social scientists,” I had seen what I expected. They call it “confirmation bias,” but in this case, you’ll have to excuse me because I really do think what I had assumed was true. They are lost.

Sanders—who still has good things to say about Fidel Castro, a so-called revolutionary who murdered his friends, impoverished his people, and ended up a billionaire—will likely lose in the general election, but these boys will still be there.

Maybe we should think about doing something for them. I wish I knew what.

Roger L. Simon, senior political columnist with The Epoch Times, is also a novelist and an Academy Award-nominated screenwriter. His latest work is “The GOAT,” available on Amazon.