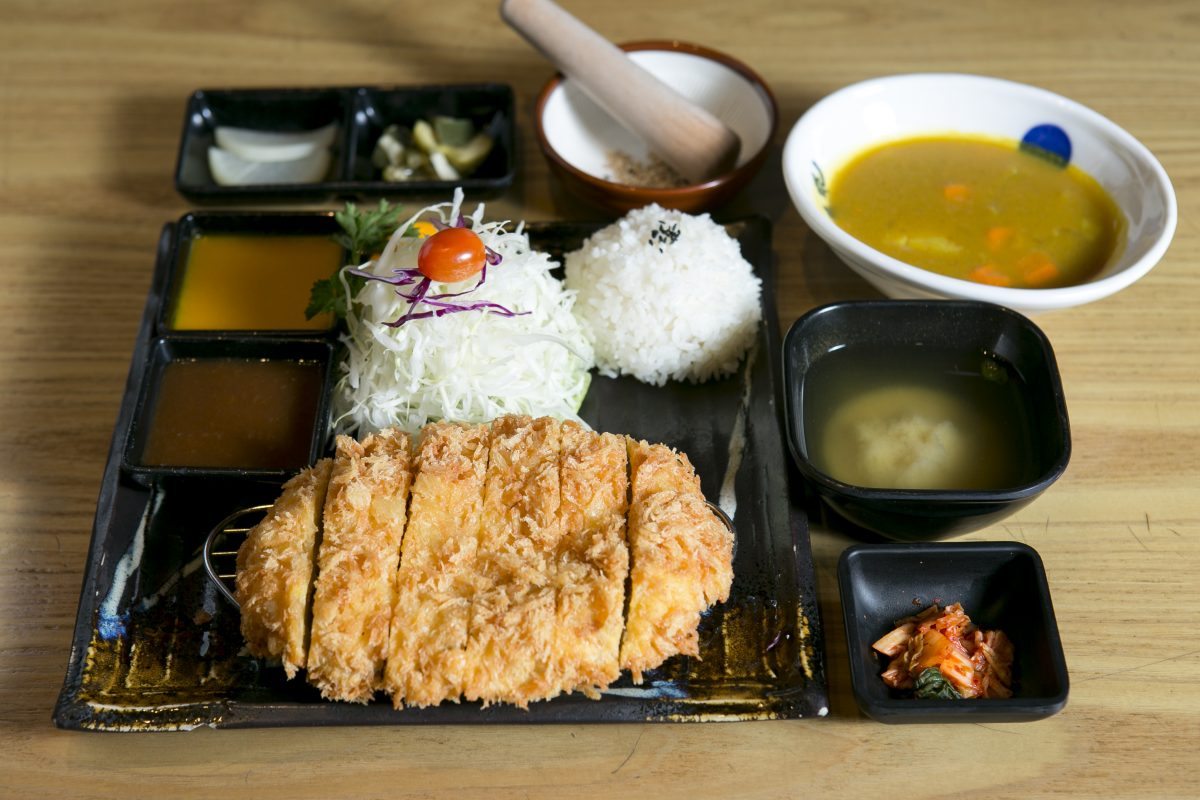 Tonkatsu, or pork cutlet, served with rice and curry. Diners can grind sesame seeds in a mortar and pestle to add to the tonkatsu sauce. (Samira Bouaou/Epoch Times)
Food

Comfort foods offer solace for the soul and a reprieve from the harried rhythm of life.

For Sophia Lee, the owner of the restaurant HanaMichi, the ultimate comfort food is tonkatsu. As a young exchange teacher in Japan in her late 20s, she had a taste of the breaded and deep-fried pork dish and was forever smitten.

Her predilection was passed on to her son. The humble tonkatsu became an edible milestone that marked his achievements: a belt promotion in tae kwon do, birthdays, college graduation, passing the bar exam, and even a newborn.

When Lee moved to the United States from her native Korea in 1999, the tonkatsu that she was used to—the one she had in Tokyo and later found at one restaurant in Seoul—eluded her.

She tried almost a dozen Japanese restaurants in Manhattan, but none gave satisfaction. Rather than the thick cutlet she was used to, time after time she was presented with a thin disk (“like a cookie,” she called it. “It’s very good, too,” she added diplomatically. In the silence following, it was easy to fill in her thoughts: “But just not the same.”)

To what lengths would you go to find the dish you’re looking for? Not any kind of dish, but the most nostalgia-laden, memories-soaked dish of them all?

Some might scour recipe forums and try to recreate it at home. Lee decided to open a restaurant. “I want to give this taste to New Yorkers. I have to,” she said.

Lee already owned a restaurant in Manhattan’s Koreatown. When a space opened up a few doors down, she snapped it up. But it was only the back of the space she wanted; the front was still occupied. She waited another year and a half before the tenants left, paying the rent on the unused space.

“It’s not business-minded, but anyway,” she said with a laugh, “I wanted to do it like that.”

Once that problem was solved, there was another. Where would she find the recipe for her beloved tonkatsu? “I like eating. I cannot cook,” she said. “I haven’t had a chance to cook in my life.”

But she was always around people who could cook, and who, incidentally, would often shoo her out of her kitchen, like her mother-in-law. “The kitchen is her whole world. So my mother-in-law always says, ‘You just have a seat here.'”

How Lee Got Her Tonkatsu RecipeBefore Lee turned restaurateur, she was a schoolteacher for 23 years. Early in her career, she was sent to teach students—about 80 of them in one classroom—in a poor neighborhood. “I was 21 years old. I looked like a baby, and the student were 13 or 14—I looked like their sister,” she said.

With the number of students, it was difficult to give personal attention.

One day there was a cooking lesson and the students were chopping vegetables to make curry. Among the crowded desks and the “chop-chop” of knives on the board she carefully made her way around the classroom.

Unusual for her at the time, she gave some encouragement to a student. He wasn’t brilliant, she said, and she felt she had been pushing him too hard—she had been pushing everybody very hard. She complimented his chopping. “You will become a very nice chef,” she told him.

When years later, Lee made a reservation at a restaurant, it was this student who took the call. He was a chef. Lee said that when they met, “He was crying, and I was crying, too.”

“How could he remember my voice?” she wondered. It turned out she was his last teacher. Because of family circumstances, he had to drop out and find work, but her words stayed with him. He remembered her picking up some of his vegetables, tasting them, and telling him, “It’s one of the best.”

“Of course I couldn’t remember,” Lee said, “But he took those words into his heart.”

It was that student, one of those many individuals around Lee who could cook, who found her a chef who would finally be able to make her tonkatsu.TonkatsuAt HanaMichi, the tonkatsu comes elevated on a small metal cooling rack, which helps keep it crunchy.

The juggling act with tonkatsu is to keep it crunchy on the outside—it’s all about the crunch—and tender inside.

The breadcrumbs are one key factor. Not just any breadcrumbs will do, explained Lee, as most have a lot of sugar and butter and would turn the cutlet too dark. Lee ships breadcrumbs in from Seoul every two days, from the one restaurant that she found was able to replicate her Tokyo tonkatsu. They are golden and flaky, and don’t feel greasy at all when fried.

The cutlet is indeed thick, as she wanted, tender, and light as air, with an addictive crunch. How is that done? It’s a cooking secret—and, Lee said, she doesn’t know since she can’t cook anyway.

The tonkatsu doesn’t come alone: there’s white rice, of course, miso soup, a salad, and to the surprise (mostly of the Japanese diners), a bowl of vegetable curry, Japanese-style ($15).

There are no rules here; you can dip the cutlet in tonkatsu sauce (a pestle is offered for diners to grind sesame seeds for the sauce), or the accompanying curry, or as I prefer, in the ginger dressing that normally belongs on the mound of salad.

Tonkatsu is comfort food, but it is a remarkably global one at that. Its origin is said to be Japanese, but it is a relatively new creation, dating back to the late 19th century, with the introduction of meat from the West. And the curry was adopted by Japan but from the British, who had been in India.

And on top of that, when you think of how a passionate South Korean-born woman sought her perfect version of tonkatsu and brought it to New York, well, … so much for national boundaries, and when it comes to food, we are all so much the better for it.
Comfort FoodHanaMichi offers a variety of Japanese comfort dishes, in addition to sushi and sashimi.

For those who prefer something along the lines of soup, there is the udon, with its thick, hearty strands ($9–$12). Good for sharing, there is a soup with seafood cakes of different shapes and sizes. These two are more robust compared to the pork and vegetable ramen ($10), which was too mild for me.

But with Lee being Korean, there is also some heat in some of the fusion dishes, notably the Burning Chicken ($17), with a fiery sauce that bears all the marks of a Korean hot sauce.

A less assertive dish, but quite beautiful to behold, is the Sweet Pumpkin With Spicy Seafood ($23). Filled with octopus, shells, clams, and crab legs, the pumpkin is cut into wedges, opening up in a flower shape. It has only the slightest heat, with a hint of sweetness.

In the evenings, the restaurant turns into a lively spot, where like an izakaya, friends congregate over drinks and food. There is an extensive selection of beverages, from soju and sake to wine and beer. Of note are the lighter, sparkling sakes, in floral or plum flavors.

The call of comfort food comes unannounced, anytime, so HanaMichi is open 24 hours a day, seven days a week.