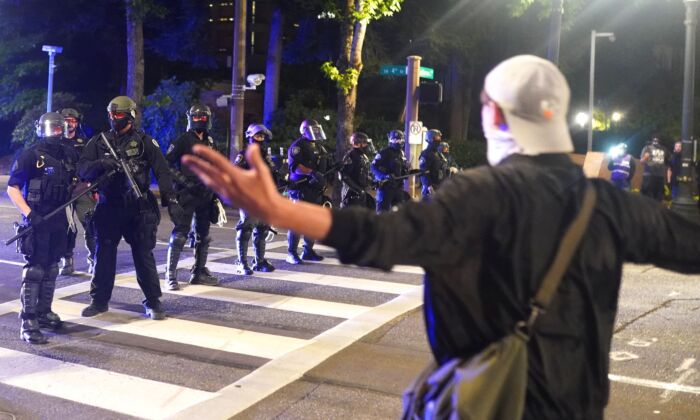 A protester taunts police as they disperse a crowd of about 150 people from around Portland City Hall, in Portland, Ore., on Aug. 25, 2020. Protests and riots have been a nightly occurrence in the city since May. (Nathan Howard/Getty Images)
US Features

As a group of about 100 anarchists raged through a Portland neighborhood on Oct. 12, police reportedly remained in their vehicles.

Some say their inaction is a direct result of confusion over an Oregon police-reform law passed last summer, which restricts how they can respond to such crowds.

In less than two hours, the group did an estimated $500,000 of damage to 35 locations, including banks, retail stores, coffee shops, and government buildings.

“Those who refuse to leave the area are subject to arrest,” the warning blared on a loop. “The bureau will investigate crimes and will make arrests either tonight, or in the future.”

Some group members laid down in front of bureau vehicles to attempt to prevent a police response. Police believe that some people involved in criminal activity were changing clothes to further stymie efforts to identify them.

According to a public statement by Portland police’s Lt. Jake Jensen, they did not intervene because of Oregon House Bill 2928 and the restrictions placed on law enforcement in a crowd-control environment.

Instead, Jensen said that investigators will work to track down those behind the vandalism at a later time.

The only exception, according to the law, is when the circumstances constitute a riot, which has also been narrowly defined in the law, and if an officer reasonably believes such tactics are necessary to “prevent more destructive behavior.”

Lt. Jensen “was providing his own interpretation of the law,” said police spokesman Sgt. Kevin Allen.

“The entire bureau membership has been made aware of the potential implications of House Bill 2928 and that it’s being analyzed by the City Attorney’s Office,” Allen told The Epoch Times. “Until we have some clarity on the bill we have to follow the most restrictive interpretation of it.”

Finding that clarity could be tricky.

“Attorneys are interpreting [the law] differently, so it’s a question of intent versus interpretation,” Andrew Fromm, a spokesman for the Oregon House of Representatives, told The Epoch Times.

“However, activist attorneys are deliberately misinterpreting legislation to prevent police from intervening,” she said. “They have no business putting law enforcement and community safety at risk.”

“Our legal team at the City Attorney’s office is reviewing HB2928 to better understand how it will affect PPB’s operation during the management of crowds.

“We will be working closely with our colleagues at the Oregon State Legislature and Department of Justice for further clarification to remain in compliance with this new law.”

Meanwhile, no arrests have been made.