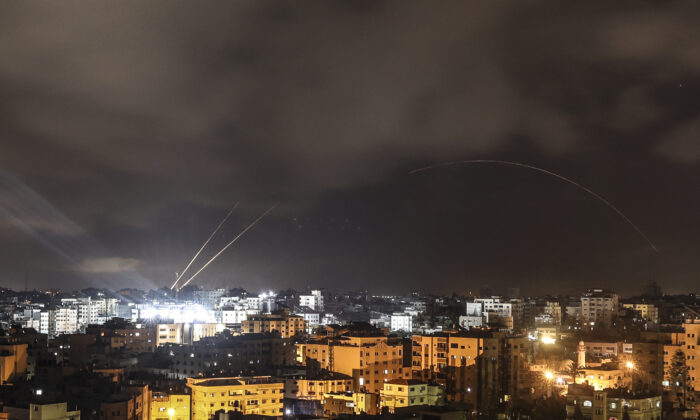 Rockets are fired from the Gaza Strip just before the start of the ceasefire brokered by Egypt between Israel and the ruling Islamist movement Hamas, in Gaza City on May 21, 2021. (Mahmud Hams/AFP via Getty Images)
Viewpoints

Hamas Given Another Chance to Destroy Israel (and the Jews)

Another round in the endless Hamas–Israel War is (temporarily) over and President Joe Biden is pleased.

After hailing the ceasefire, he spoke as follows of the next steps:

“We remain committed to work with the United Nations and other international stakeholders to provide rapid humanitarian assistance and to marshal international support for the people of Gaza and the Gaza reconstruction efforts. We will do this in full partnership with the Palestinian Authority, not Hamas. Authority [sic], in a manner that does not permit Hamas to simply restock its military arsenal. I believe the Palestinians and Israelis equally deserve to live safely and securely and to enjoy equal measures of freedom, prosperity, and democracy.”

Aside from the predictable blather about involving the pathologically anti-Israel U.N., a deeper question arises: How is Biden (or anyone) going to prevent Hamas from “restock[ing] its military arsenal” during these “reconstruction efforts”?

No one, thus far, has been able to figure out how to prevent Hamas from diverting the inevitable deluge of relief funds into obtaining more and better missiles and rebuilding their humongous underground terror tunnel system—other than the obvious, which is to level the terror organization or at least wound them beyond recognition.

But Biden, fresh off a friendly tarmac encounter with Rep. Rashida Tlaib (D-Mich.), wouldn’t allow that to happen and told Netanyahu to wind it down, assuring him at the same time that the United States would replenish Israel’s supply of Iron Domes.

Meanwhile, shoring up the Palestinian Authority seems more hopeless than ever as their doddering leader Mahmoud Abbas has been made to look even more hapless compared to a resurgent Hamas.

Who will stop them now, especially since their own losses don’t seem to concern them, only killing Jews, as they tell us quite openly in their charter?

Biden is particularly badly placed to solve this in his eagerness to restart an agreement with the terror organization’s main benefactor and arms supplier in Tehran.

Hamas is happy—or acting as if they are, which is all they need to do. As Anna Ahronheim writes in the Jerusalem Post in “Hamas celebrates truce ‘victory,’ warns of future resistance against Israel”:

“Celebratory demonstrations took place in the Gaza Strip and West Bank as well, following the ceasefire. Fireworks, singing, and parades down the streets could be seen in uploaded footage shared on social media, accompanied with the hashtag #Palestine_Victorious.”

Hamas is, in essence, a death cult and, therefore, extremely difficult to counter since they apparently couldn’t care less if their Jerusalem-bound missiles happen to land squarely on the city’s Arab population or even on the Al-Aqsa mosque.

And if Israeli jets inadvertently kill some children while attacking their Gaza assets, all the better. It’s something to exploit. Hamas hid their weapons in that school for a reason.

The Associated Press—working cheek-by-jowl with the terrorists in the same building for years, we now learn, even as they pretend they didn’t know it—provides a perfect conduit to promulgate the so-called “atrocities” perpetrated by the high-tech Israeli army and air force as they act, like any normal nation, in defense of their own people against an aggressor.

The AP and many of their equally despicable media cohorts have done their job and then some in spreading pro-Hamas propaganda.

Antisemitism has reached heights not seen in decades. Street violence against Jews is now a familiar phenomenon across our country from Los Angeles to New York and, most recently, Miami. London and other European capitals are seeing a significant rise. It’s almost like we’re back to the 1930s with our own “Kristallnacht” lurking.

And just the other day, the cat came out of the proverbial bag. In her press conference, Biden’s porte-parole, Jen Psaki, allowed as how the only progress in the Middle East in decades—the Abraham Accords that made peace between Israel and a number of Arab countries, from commercially oriented Dubai to strong rejectionists like the Sudan—was “DOA,” and therefore a mistake (because it happened during Trump, no doubt):

“We felt there was not a constructive action by the prior administration, aside from putting forward a peace proposal that was dead on arrival. We don’t think they did anything constructive really to bring it into the long-standing conflict in the Middle East.”

Does this woman have the same cognitive issue as her boss, or is this Trump Derangement Syndrome brought to a yet higher power? Or is it, as is so often the case, another instance of projection on the part of the left?

Soshana Bryen has a lot more to say in “About Those ‘DOA’ Abraham Accords” that I highly recommend, but I would like to roll back to the 6-year-old Roger Simon, who first learned about the Holocaust in his father’s office circa 1950.

My father was a doctor who hired refugees for his nursing staff when he could. One of them, Mrs. Mendes, who was especially nice to me as a little boy and spoke with a thick Eastern European accent, had numbers tattooed on her arm. I asked her what that was and that’s how I learned. I realized, even then, something horrible had transpired, and in my very young lifetime.

Ever since then, I wondered how people—the Jewish people who were the primary victims—allowed that to happen. Not everybody did, of course. Some fought back courageously to the extent they could. But enough went along. Why? How?

Yes, there are many explanations, but today—and this is brutal to say, but I mean it—when I listen to the noxious, self-hating opinions of Jewish politicians like Sen. Bernie Sanders (I-Vt.) and some of my Jewish colleagues in the media, plus Psaki’s blithe dismissal of the Abraham Accords, I think I understand at last.

We are in our version of the ’30s, when the German Communist Party used the slogan “nach Hitler uns,” “after Hitler us,” (or “nach Hitler commen wir”)—meaning the communists would be targeted after the Nazis—as an excuse for not opposing the Nazis in the 1932 election.

So if you ask why I was so militant in an earlier piece—This Time Israel Should Finish Off Hamas—that probably has something to do with it.

We are, after all, but 76 years from the liberation of Auschwitz.