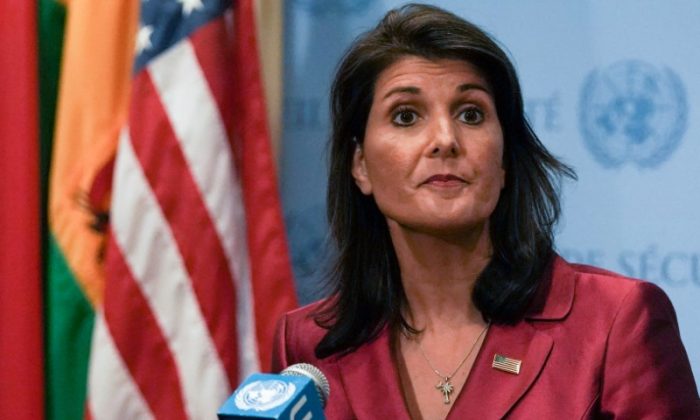 Former U.N. Ambassador Nikki Haley said Wednesday that the Biden administration’s axing of the Keystone XL oil pipeline project and what she said were moves to “ban fracking” both play into Russia’s hands.

“[Russian President Vladimir] Putin has to be pretty ecstatic right now,” Haley told Fox News on Wednesday. “One of the things that bothered him the most was how energy independent we had become.”

The United States under the Trump administration became the world’s top producer of oil and maintained its position as the top global producer of natural gas. The country in 2019 became a net exporter of petroleum (crude oil and refined) products for the first time since 1949, and is now in its fifth consecutive year as a net exporter of natural gas.

Biden’s early steps after taking office represent a sharp break from the Trump administration’s efforts to maximize fossil fuel production. On his first day in office, Biden moved to rejoin the Paris Agreement on climate change and revoked a permit for the Keystone XL pipeline. The pipeline was first proposed in 2008 but reached a snag under the Obama administration. Former President Donald Trump revived the project and was one of its chief advocates.

Haley said that Biden’s shutting down of the Keystone pipeline and what she said were his administration’s moves to “ban fracking” both make his first seven days in office “a good first week for Russia.”

Last week, the Biden administration imposed a 60-day suspension of new permits for oil and gas leasing, drilling, and fracking on federal lands. According to multiple media reports, Biden is expected to go a step further on Wednesday and impose a moratorium on such permits, although the freeze would not impact existing leases and would not apply to private land, which accounts for more than three quarters of total U.S. oil production and even more for natural gas.

During his campaign, Biden said he would block new federal land drilling leases but that he opposed a nationwide ban on fracking, although the Trump campaign repeatedly suggested otherwise. At a September rally in Pennsylvania, Trump said that Biden would be pressured by the “radical left” to go further on fracking bans, saying they “won’t let him get away with it. And I’m all for fracking.”

Haley, in her interview with Fox News, complained that Biden is “more interested in reversing everything President Trump did” rather than looking forward.