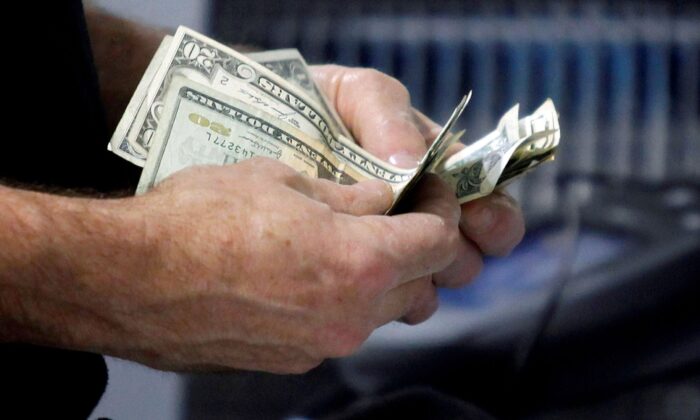 A customer counts his cash at the register while purchasing an item at a Best Buy store in Flushing, N.Y., on March 27, 2010. (Jessica Rinaldi/Reuters)
Personal Finance

Half of Americans Didn’t Save During Pandemic, Leaving No ‘Savings Cushion’ Amid Recession Fears

Roughly half of Americans did not build up savings during the COVID-19 pandemic, according to a new survey by YouGov, as fears mount that a recession could be looming on the horizon.

YouGov’s survey covered 20,000 adults across 18 major economies including Sweden, Spain, Australia, China, and India, and challenges the idea that households within the world’s major economies have a savings cushion that could bolster spending amid a potential economic downturn.

According to the survey, shared exclusively with Bloomberg, 51 percent of respondents stated that they had not added to their savings during the global pandemic, with Germany seeing the lowest rate of savings at 39 percent, while Italy stood at 40 percent.

The United States, United Kingdom, and Canada also saw results below 50 percent when respondents were asked if they had added to their savings.

Elsewhere, the survey showed that of those who did manage to build up their savings during the pandemic, just 53 percent have managed to hold onto them, while 26 percent have spent the savings on bills or other essential purchases.

Another 13 percent said they spent the cash on holidays and social events after lockdown restrictions were lifted, while 19 percent used their savings on home improvements or to move into a new house.

The latest survey comes as U.S. Treasury Secretary Janet Yellen said June 19 that she expects the U.S. economy to slow in the months ahead, but remained optimistic that a recession is “not at all inevitable,” despite concerns among economists that a downturn is on the horizon.

In an interview with ABC’s “This Week,” Yellen said that consumer spending remains strong, in spite of increased prices for everything from fuel to food, and that bank balances among Americans remain “high,” allowing for them to weather increased inflation.

“It’s clear that most consumers, even lower-income households, continue to have buffer stocks of savings that will enable them to maintain spending,” Yellen said. “So I don’t see a drop-off in consumer spending as a likely cause of the recession in the months ahead, and the labor market is very strong, arguably the strongest of the postwar period.”

The national saving rate was about 4.4 percent in April 2022, the lowest since September 2008, according to data from the U.S. Bureau of Economic Analysis (BEA) published on May 27.

Separate data from Northwestern Mutual’s 2022 Planning & Progress Study showed that the average amount of personal savings dropped 15 percent from $73,100 in 2021 to $62,086 in 2022, although year-over-year numbers show that savings levels remain high, with 60 percent of those surveyed stating that they’d been able to build up their personal savings over the past two years.

However, inflation has reached a 40-year-high, surging to 8.6 percent in May, leaving Americans splashing out more for everyday essentials.

In an effort to bring down those inflation figures, the Federal Reserve raised its benchmark interest rate three-quarters of a percentage point on June 15 and Fed Chairman Jerome Powell said he expects “either a 50-basis-point or a 75-basis-point increase” at the July meeting.

“Overall economic activity appears to have picked up after edging down in the first quarter,” the Federal Open Market Committee said on June 15. “Job gains have been robust in recent months, and the unemployment rate has remained low. Inflation remains elevated, reflecting supply and demand imbalances related to the pandemic, higher energy prices, and broader price pressures.”

“The Committee is strongly committed to returning inflation to its 2 percent objective,” the statement added.

Despite the concerns that lay ahead, Northwestern Mutual’s report found that 73 percent of American adults say they’ve adopted better financial habits due to the COVID-19 pandemic and all 73 percent expect to continue with those habits going forward, while 35 percent believe inflation will subside this year.