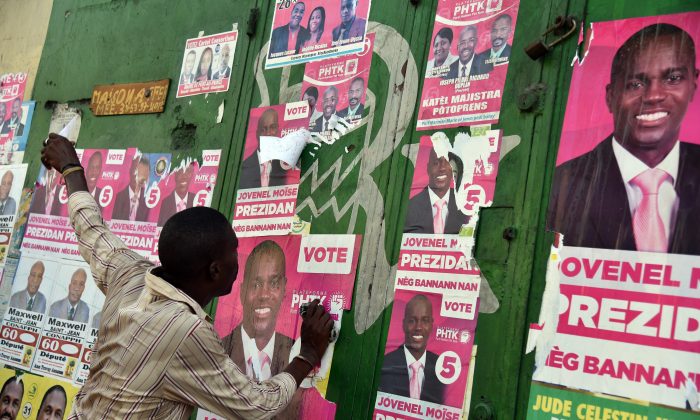 A man tears election posters of the presidential candidate Jovenel Moise during a march of supporters of LAPEH, Fanmi Lavalas and Petit Dessalines political parties in the streets of Port-au-Prince, Haiti, on Nov. 11, 2015. (HECTOR RETAMAL/AFP/Getty Images)
Americas

PORT-AU-PRINCE, Haiti—Eight candidates in October’s disputed presidential vote are demanding changes in Haiti’s electoral council and national police department. And if that doesn’t happen by December, they are calling for a transitional government to oversee new general elections.

Among those signing the Nov. 29 declaration was Jude Celestin, the second-place finisher who is due to face the government-backed candidate, Jovenel Moïse, in a Dec. 27 runoff. The ultimatum throws that runoff into question.

The Group of Eight alliance, which includes 7 of the top 10 vote-getters in the Oct. 25 first round, said that without “major changes … fair, free, and democratic elections” cannot be held while outgoing President Michel Martelly is in power.

The eight said a transitional government would be charged with adopting a new constitution, making various reforms, and organizing “credible” general elections within two years. They did not specify how it might be formed.

The eight have been demanding an independent recount due to what they assert was “massive fraud” in favor of Moïse. But election authorities say the vote was a success and that fraud allegations have been properly investigated. They also say they lack the authority to appoint an independent panel to verify results.

Pierre-Louis Opont, president of the Provisional Electoral Council, told reporters at a Nov. 30 press conference that the next round will take place and the final results of the October vote “are not going to change.”

Many hoped that elections would end years of political gridlock; the official results have instead brought a renewed surge of paralyzing street protests.

He suggested the Group of Eight ultimatum was a political strategy and said the council would not get involved.

The Electoral Council, which oversees the entire election process, said the agricultural entrepreneur chosen by Martelly to be his successor had nearly 33 percent of the vote and compared to 25 percent for Celestin, a former state construction chief who was the government-backed candidate five years ago.

While many Haitians hoped that elections would end years of political gridlock, the official results have instead brought a renewed surge of paralyzing street protests.

The Group of Eight is calling for the protests to continue, saying people should not “cede to blackmail, intimidation, and manipulation.”

But observers from the Organization of American States said the results appeared to be in line with what they saw on election day.

On Monday, Nov. 30, officials at the U.S. Embassy and the U.S. State Department’s Office of the Haiti Special Coordinator referred all comment to the Haitian government. The United States contributed over $30 million to fund the three-round electoral process in Haiti.

Under Haitian electoral law, if a candidate selected for the runoff withdraws, he would be replaced by the next contender in line. The third-place finisher, former Sen. Moise Jean-Charles, belongs to the opposition alliance. The fourth-place finisher, Maryse Narcisse of the Fanmi Lavalas Party founded by former President Jean-Bertrand Aristide, is not a member of the alliance.