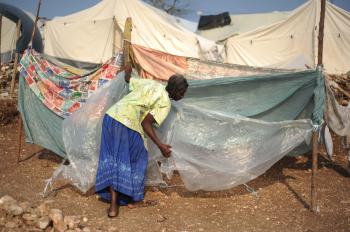 A Haitian woman sets up her makeshift tent at a camp in Port-au-Prince on March 1. (Eitan Abramovich/AFP/Getty Images)
International

Life Is Perilous in Makeshift Camps in Haiti

Jasper Fakkert
Editor-in-Chief, U.S. Editions
Jasper Fakkert is the Editor-in-chief of the U.S. editions of The Epoch Times. He holds a Bachelor's degree in Communication Science and a Master's degree in Journalism.
View profile
Follow
biggersmaller
Print
The magnitude 7.0 earthquake lasted only 30 seconds, but left 1.3 million Haitians displaced. Most of them now live in makeshift camps in or around Haiti's capital of Port-au-Prince in squalid conditions and without proper medical care or security, particularly for women. The coming rainy season is expected to make already harsh conditions even worse.

Providing shelter for the homeless has become a mammoth task for aid organizations. According to the U.N., so far only 60 percent of the homeless have received waterproof covers made out of canvas to protect them during the rainy season.

“The most urgent challenge right now is shelter, shelter, shelter—coupled with sanitation,” said U.N. Secretary-General Ban Ki-moon on Sunday after having visited the country.

But canvas shelters won't protect the displaced from the hurricane season, which will start in June. More solid structures with roofs made out of wood or metal are planned, but they will only be able to provide shelter to half of those in need, said Emergency Relief Coordinator John Holmes at a press conference. “We won’t do that for everybody … that’s the reality at the moment,” he said.

According to Medicines Sans Frontiers, which is providing medical assistance in Haiti, the rainy season will add to the “horrific living conditions of many who still do not have proper access to sanitation facilities, and increase the likelihood of contracting malaria.”

Along side housing and medical exigencies, women face a battle of their own inside the camps. The lack of security has given rise to widespread sexual abuse of woman. A top U.N. police official, Ann-Marie Orler said in a press conference last week that she had seen for herself how difficult it was to patrol the camps as “the tents were close together and there was no electricity, leaving them completely dark at night and forcing people to shower on the streets.”

Although the Haitian national police presence has increased in Haiti's capital, rule of law is not strong. There have been reports of national police officers engaging in extrajudicial killing of looters and escaped prisoners.

The Haitian government is now planning to group the homeless from about 900 settlements into five camps in an attempt to increase security for woman and other vulnerable people and to make the distribution of aid easier.

Initially, the Haitian government had opposed the idea of creating larger camps fearing that they might turn into permanent slums.

In total, an estimated 230,000 people were killed in the earthquake, and another 300,000 injured; 97,294 houses were destroyed and 188,383 were damaged in Port-au-Prince and the surrounding area. The U.N. together with the Haitian government has issued a $1.4 billion appeal to provide aid and support. So far only half of the funds have been raised.