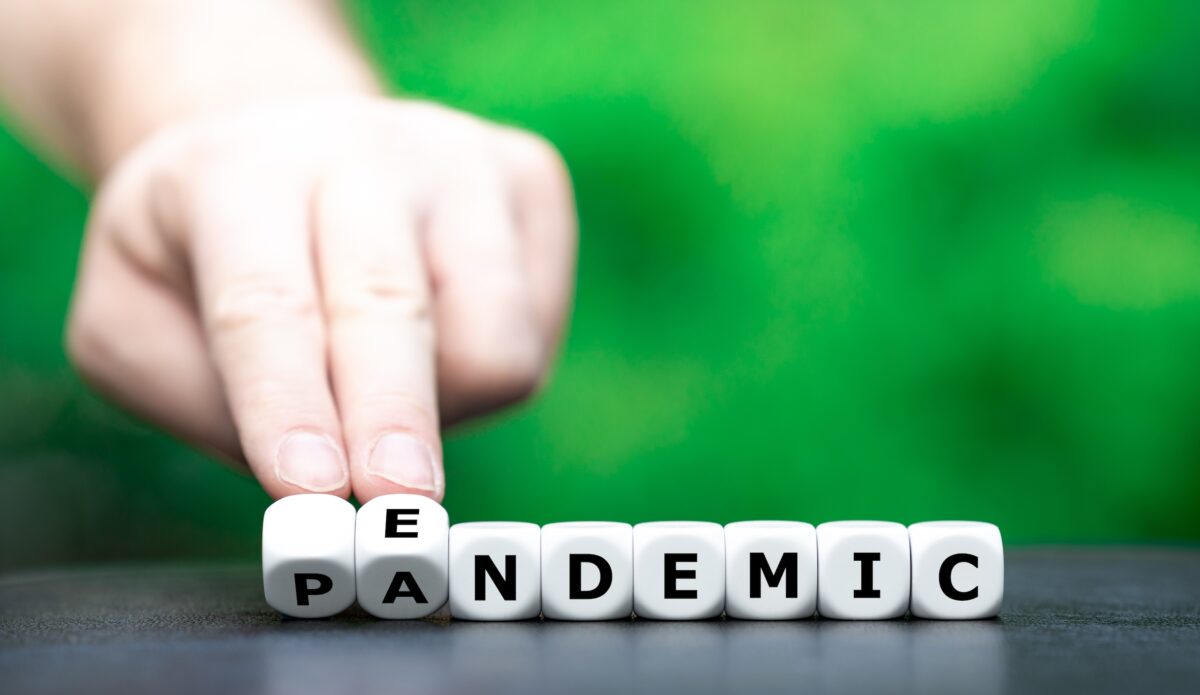 Had Enough of Covid? Then I Have Great News

For nearly a year, experts have noted that the COVID shots cannot establish herd immunity to end the pandemic, as the gene transfer injections do not prevent infection or transmission.

It’s not rocket science, yet health officials and government leaders around the world have irrationally claimed otherwise, and censored any and all—regardless of credentials—who dared to suggest alternative approaches.

Now, all of a sudden, the narrative is rapidly changing, with loads of these same individuals—truthfully, if you can believe that—acknowledging that the COVID “vaccines” cannot end the pandemic and that we need to learn to live with the virus. Some have even started speaking out against repeated boosters, at least at intervals of three to four months.

It seems a major driver for this U-turn in the pandemic narrative is the emergence of the Omicron variant. While incredibly infectious, it causes only mild cold symptoms in the vast majority of people, so it’s essentially ripping through populations, leaving natural herd immunity in its wake. As a result, many are now claiming the end of the pandemic is in sight.1

Moving on From COVID

“The director of global infectious diseases at Massachusetts General Hospital is predicting what was unthinkable less than a month ago: The end of the pandemic. Dr. Edward Ryan made stunning and encouraging comments on the Omicron variant that give hope for a return to normalcy.

Among these: Omicron will make boosters unnecessary. The COVID virus will join the ranks of the ‘common cold.’ And the latest wave will enter ‘clean up mode’ shortly. ‘We are fighting the last war with COVID and should be pivoting back to normal life,’ the summary of Dr. Ryan’s comments states. ‘Spring/Summer will be really nice!'”

According to Ryan, nearly 100 percent of COVID cases in the Boston area are now Omicron, which is good news, considering it doesn’t appear to bring with it any of the more severe side effects seen with previous strains, including Delta. In New England, the current outbreak is predicted to rapidly wane and disappear during the month of February 2022. Nationwide, Omicron was reportedly responsible for about 73 percent of all cases as of early January 2022.3

Pfeiffer also reports that, according to Ryan, booster shots will not be needed for Omicron, as by the time a dedicated injection is released, the wave will already be over and done with. Ryan is reported to have stated that “we’re all going to get it, which will give us the immunity we need to get through it,” referring to the Omicron infection.

Ryan’s comments fly in the face of mainstream medical recommendations, which near-universally call for boosters for everyone, including children. Clearly, however, Ryan makes a lot of sense. The boosters, while seemingly able to temporarily raise a double-jabbed person’s resistance against Omicron, it’s designed to protect against the original SARS-CoV-2 strain that no longer exists.

Overall, it appears the only reason a double-jabbed person would need a booster against Omicron is because the first two doses impaired their immune system such that they’re now more vulnerable, even to a milder strain. This downward spiral of negative immunity can only continue if people continue to take boosters, especially mismatched ones.

In early August 2021, the director of the Oxford Vaccine Group, professor Sir Andrew Pollard, actually spoke out against the idea that the COVID shots were the answer everyone was looking for. At the time, he referred to the idea that vaccine-induced herd immunity against COVID was “mythical.” As reported by Yahoo! News, Aug. 10, 2021:4

“… Pollard … said … that herd immunity is ‘not a possibility’ with the current Delta variant. He called the idea ‘mythical,’ warning that vaccine programs should not be developed around it.

‘We know very clearly with coronavirus that this current variant, the Delta variant, will still infect people who have been vaccinated and that does mean that anyone who’s still unvaccinated, at some point, will meet the virus,’ Pollard told a session of the All-Party Parliamentary Group (APPG) on coronavirus.

He said that while vaccines might ‘slow the process’ of transmission down, they cannot currently stop the spread completely.

‘I think we are in a situation here with this current variant where herd immunity is not a possibility because it still infects vaccinated individuals,’ he said, predicting the next thing may be ‘a variant which is perhaps even better at transmitting in vaccinated populations.’ He added: ‘So that’s even more of a reason not to be making a vaccine program around herd immunity.'”

During that same APPG meeting, professor Paul Hunter from the University of East Anglia stressed that variants capable of evading the COVID shots were “an absolute inevitability.” Pollard and Hunter both turned out to be correct, as Omicron’s vaccine-evading capacity has now been documented.

Most People Are ‘Done’ With COVID

The reprieve Omicron provides could not have come at a better time. At this point, after two years of repetitive fearmongering, most people have simply had enough. It’s not often you put a hold on life for this long, and the general consensus appears to be that people are ready to brave life even if the threat of COVID remains.

“The determination to get on with our lives is deeply and perhaps unchangeably human …. Whatever damage Omicron might wreak in the immediate future, we will, most likely, soon lead lives that look a lot more like they did in the spring of 2019 than in the spring of 2020.” — Yascha Mounk, associate professor, Johns Hopkins University

In a Dec. 22, 2021, Atlantic opinion piece, Yascha Mounk, associate professor at Johns Hopkins University and a senior fellow at the Council on Foreign Relations, noted that “No matter the severity of the variant, the appetite for shutdowns or other large-scale social interventions simply isn’t there.” He goes on:5

“It feels like everyone I know has COVID … The pattern among my circle of friends fits with what’s unfolding in South Africa, where the coronavirus’s new Omicron variant was first identified.

The number of cases in the country shot up quickly, but the number of deaths has so far increased much, much more gradually — possibly indicating that Omicron is more contagious but causes less severe disease than previous variants …

I wager that, whatever course Omicron — or future strains of the disease — might take, we are about to experience the end of the pandemic as a social phenomenon …

Despite skyrocketing caseloads, few pundits or politicians are proposing strict measures to slow the virus’s spread. The appetite for shutdowns or other large-scale social interventions simply isn’t there …

Scientists have their own way of deciding that a pandemic is over. But one useful social-scientific marker is when people have gotten used to living with the ongoing presence of a particular pathogen.

By that definition, the massive surge of Omicron infections that is currently coursing through scores of developed countries without eliciting more than a half-hearted response marks the end of the pandemic.”

Mounk, like others, pointed out that if Omicron turned out to be as mild as it initially appeared—which has been borne out since then—then natural herd immunity would develop as the highly infectious virus spread like wildfire. With that baseline of natural immunity, populations would, in the future, be far better equipped to handle any new strains that emerge, “without a significant increase in mortality.”

Mounk goes on to discuss how, over time, people get used to and learn to live with all sorts of risks, including direct threats to life and limb, and that’s exactly the kind of resiliency we see building and spreading now:6

“When I was growing up in Germany, I was fascinated by news reports about life in very dangerous places. Residents of Baghdad or Tel Aviv seemed to put themselves in danger simply by going shopping or meeting friends for a cup of coffee.

How, I wondered with a mixture of horror and admiration, could anybody be willing to accept such an existential risk for such a trivial pleasure?

But the truth of the matter is that virtually all humans have, for virtually all of recorded history, faced daily risks of disease or violent death that are far greater than those that the residents of developed countries currently face.

And despite the genuine horrors of the past 24 months, that holds true even now … The determination to get on with our lives is deeply and perhaps unchangeably human.

In that sense, the spring of 2020 will be remembered as one of the most extraordinary periods in history — a time when people completely withdrew from social life to slow the spread of a dangerous pathogen. But what was possible for a few months has turned out to be unsustainable for years, let alone decades.

Do You Have a Cold, Flu or COVID?

Based on what I’m seeing around me, it seems the prediction that Omicron will “get” just about everyone is likely to be true. People are sick in droves. The good news is that there’s little panic surrounding these cases. Most people are now realizing that there’s no need.

That said, I still recommend treating any COVID symptoms early and aggressively, just in case. As mentioned, the vast majority of SARS-CoV-2 infections are now related to Omicron, and the core symptoms are near-indistinguishable from the common cold and/or influenza. The most commonly reported symptoms of Omicron infection are:

In addition to these, other symptoms commonly reported with SARS-CoV-2 infection, up to and including Delta, include:

A key difference in symptomology between Delta and Omicron is that Omicron does not appear to cause the loss of taste and smell, which often occurs with Delta infection (as with previous strains). Fortunately, Omicron also does not seem to be associated with blood clots, like previous strains (especially the initial ones), and it’s also far less likely to cause severe lung infection and damage.9, 10

Considering the uncertainties around diagnosis, it’s best to treat any cold or flu-like symptoms early. At first signs of symptoms, start treatment. Perhaps it’s the common cold or a regular influenza, maybe it’s the much milder Omicron, but since it’s hard to tell, your best bet is to treat symptoms as you would treat earlier forms of COVID.

Considering how contagious Omicron is, chances are you’re going to get it, so buy what you’ll need now, so you have it on hand if/when symptoms arise. And, remember, this applies for those who have gotten the jab as well, since you’re just as likely to get infected—and perhaps even more so. Early treatment protocols with demonstrated effectiveness include: