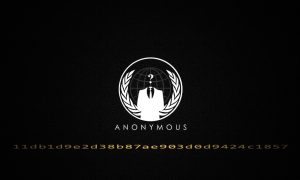 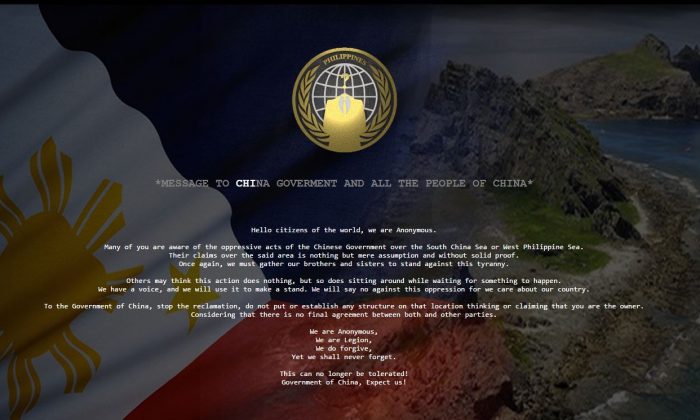 While other nations have begun challenging the Chinese Communist Party’s claims to territory in the South China Sea, another conflict is brewing over the region—this one between hackers.

The hacker collective Anonymous started a new operation recently to oppose the Chinese regime’s land-grab in the South China Sea. They’re calling the operation “#OpStopReclamation” and they’re running it under the “#OpChina” tag on Twitter, which has previously been used to support human rights in Tibet and democracy protests in Hong Kong.

As part of the operations, Anonymous has been defacing Chinese websites. In a recent bout of attacks, they hijacked 7 Chinese government websites, 10 education websites, and 64 commercial websites. The attacks are allegedly being launched by Anonymous members in the Philippines.

On each website they posted a message, stating: “Many of you are aware of the oppressive acts of the Chinese Government over the South China Sea or West Philippine Sea … Their claims over the said area is nothing but mere assumption and without solid proof.”

They added, “Once again, we must gather our brothers and sisters to stand against this tyranny.”

There are two sides to this conflict, however. On one side are hackers with Anonymous launching cyberattacks against the Chinese Communist Party.

The China Hacker Army recently posted a video of them launching cyberattacks and shutting down websites in Vietnam and the Philippines, including the Vietnamese Ministry of TV news stations and the Philippine Foreign Ministry.

The China Hacker Army uses a profile image associated with Anonymous, with the Anonymous logo hanging in front of the Chinese Communist Party’s flag. The image was originally used by Anonymous for cyberattacks against the Chinese regime during the pro-democracy protests in Hong Kong.

In October, however, they were using a very different line, saying they would “eliminate anonymous hacker” and that while Anonymous are “like rats hiding everywhere … we are the Chinese hackers.” They added, “Chinese hackers will counter anonymous organization, anonymous death approaching.”

The China Hacker Army group has been posting their attacks on www.hack-gov.cn, where they have banners advertising the Chinese regime’s patriot hackers. The Chinese Communist Party has a history of using its patriot hackers in operations alongside its official military hackers.

Other Chinese hackers who appear to be related to the “China Hacker Army” are taking other approaches. One group, which has taken on the moniker “Anonymous China,” has been using the Anonymous title and logo yet appears to dedicate itself to calling off cyberattacks against the Chinese regime.

In a Facebook post from May 29, the group claiming to be with Anonymous China stated, “Anonymous calls for a global anonymous China don’t listen to the United States government incitement to Vietnam, the Philippines, hackers and extremists,” and tried to call off cyberattacks against the Chinese regime that Anonymous had planned for May 30.

In a recent post they warned Anonymous, “Don’t provoke China network” or “China’s Anonymous” would fight back.