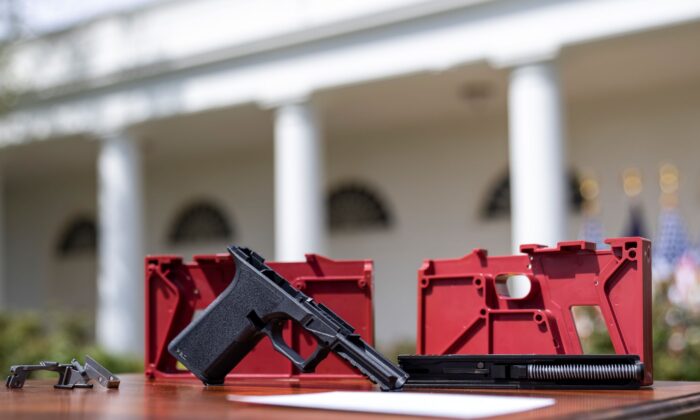 A "ghost gun" is displayed before the start of an event about gun-related violence in the Rose Garden of the White House in Washington on April 11, 2022. (Drew Angerer/Getty Images)
US

Pennsylvania firearms product dealer JSD Supply filed for a temporary restraining order against the Bureau of Alcohol, Tobacco, Firearms, and Explosives (ATF) on May 19, asking a federal judge to block “secret and unannounced policy changes” that restrict the sale of gun parts.

The dispute stems from the ATF ordering JSD Supply to stop dealing “80 percent receivers”—a colloquial term used within the firearms industry for incomplete and unfinished firearm frames or receivers.

While the ATF has a history of approving the sale of 80 percent receivers—as documented in JSD Supply’s motion for a restraining order—the two parties apparently disagree about what exactly the company is selling. In response to an email inquiry for this article, ATF Special Agent Robert Cucinotta declined to comment but referenced The Epoch Times to the Biden administration’s April 11 order to crack down on “ghost guns.”

“This final rule bans the business of manufacturing the most accessible ghost guns, such as unserialized ‘buy build shoot’ kits that individuals can buy online or at a store without a background check and can readily assemble into a working firearm in as little as 30 minutes with equipment they have at home,” the order said. “This rule clarifies that these kits qualify as ‘firearms’ under the Gun Control Act.”

However, JSD Supply contends that the ATF’s May 9 cease-and-desist order has nothing to do with the White House ghost gun rule, which doesn’t go into effect until August. To the company’s point, ATF said in its cease-and-desist order that JSD Supply’s 80 percent receivers “have always been firearms pursuant to the [Gun Control Act] … notwithstanding the recently announced regulations.”

Instead, JSD Supply contends that the ATF’s cease-and-desist order resulted from “secret and unannounced policy changes” from years ago.

According to JSD Supply, in 2018, the ATF began to “implement a series of secret and unannounced policy changes regarding the sale of ‘80% frames and receivers,’ the tools used to manufacture them, and the firearm parts used in the assembly process.” Internal ATF records obtained by JSD Supply via the Freedom of Information Act (FOIA) show the bureau refusing to categorize a gun kit as “not a firearm” in 2018—evidence that the policy shift occurred behind closed doors around that time, JSD Supply’s attorney, Stephen Stamboulieh, told The Epoch Times.

According to Stamboulieh and his client, gun product dealers weren’t made aware of the secret change until the ATF raided a manufacturer in late 2020.

“Suddenly, without warning, in December of 2020, ATF paid a visit to the nation’s largest manufacturer of 80% frames and receivers, Polymer80, Inc.,” JSD Supply’s motion said.

“Each time since then, ATF has moved the goalposts by changing its policy. The industry—including plaintiff—has attempted in good faith to adapt to and comply with ATF’s demands, despite the lack of any legal authority for ATF’s position.”

To support its theory about moving the goalposts, JSD Supply noted that the ATF did not seize from Polymer80 some of the same 80 percent receivers that are subject to the bureau’s cease-and-desist order. JSD Supply also argued that it was being singled out by the ATF when numerous other retailers offer the same products.

“Indeed, there are dozens, if not hundreds (or possibly thousands) of other companies across the country and internet which offer for sale ‘all the component parts’ necessary for a customer to manufacture a complete firearm,” JSD Supply said quoting from the ATF’s order.

“This raises the obvious question as to why ATF made the decision to target Plaintiff with a cease-and-desist order, effectively shutting down its business, for doing nothing more than following standard industry practice.”

JSD Supply said the ATF has not clarified how the company can comply with its policy on 80 percent receivers, which is why a restraining order is necessary.

“If ATF had wanted to change (again) its secret, unsupported policy on 80% frames and receivers, the agency had the option of issuing an open letter to all manufacturers and retailers of 80% receivers and firearm parts, giving notice to all of the change,” the company said.

“Defendants’ vague C&D order, without any statutory authority, has forced plaintiff to immediately suspend all retail sales of its entire product line, causing immediate and substantial financial losses, violating the Fifth Amendment, and infringing on the Second Amendment rights of Plaintiff and its customers. Accordingly, Plaintiff is seeking emergency relief, in the form of a temporary restraining order.”

A hearing date has yet to be set for the matter.